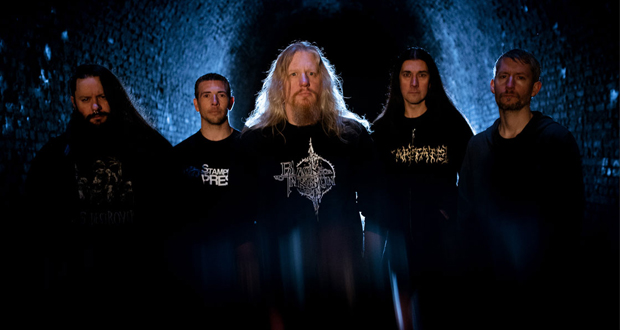 Extreme metal men, Krysthla have now revealed their third single ‘The Minor Mystery Of Death’ from their new EP Peace In Our Time. The EP recently broke into break into Amazons UK Top 10 alongside Deep Purple, Mastodon and more.

Guitarist Neil Hudson says of the track: “The Minor Mystery Of Death is about embracing the end. Death is an absolute certainty and we’re living lives that seem like they’re going to last forever until it’s too late and your mortality is thrust into your hands. “We’re very precious towards our lives but don’t actually live them.”
Peace In Our Time was influenced by Krysthla’s 2016 European tour with Decapitated – with Hudson revealing that one experience on the road will live with him forever:
“On the Greek border, I saw a refugee girl stood on the other side of the motorway while we were parked up getting fuel. She saw us looking over at the thousands of grubby tents cooking the inhabitants in the scorching heat and fixed her eyes on me for a few seconds. “I gave her a nod. She jumped over the barrier and ran over the motorway to the garage, dodging traffic on her way. She walked over, looked me straight in the eye, said something in Syrian and gave me a highfive and hugged my leg. “I left a bit of me behind that day. We sobbed in the van as we left. It was utterly heart breaking to hear the hum of bodies murmuring in the boiling sun.” Hudson adds: “The album is influenced heavily, and almost solely by the fact I am a father. With so much unrest and violence in the world, it’s easy to turn your back and pretend none of it has an impact on your life. “Or somehow because it’s a long way from home it’s someone else’s problem. War does not sleep. War does not stop. It doesn’t choose who dies and who lives. But the people who light the fire and fan the flames do.”

There’s a genuine, gritty passion that doesn’t get lost in the mix. Read the full review here.

Catch Krysthla live on one of the following dates: