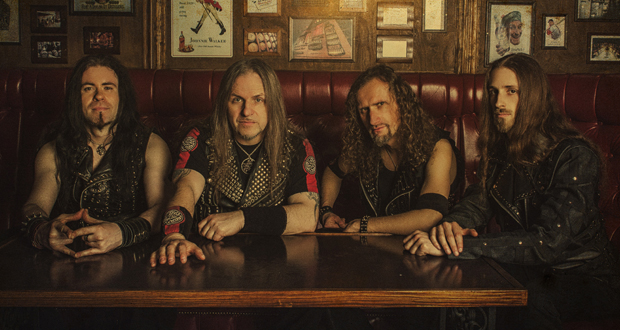 It’s always fun going to new places for gigs however The Rebellion is such a great venue with an atmosphere you can nearly taste. It has little pockets of space dotted around the building, it’s like a Tardis when you enter and it’s got a good-sized stage; that all the bands made good use of, in fact, it was a really special day on every account.

They say Liverpudlians are friendly but certainly not as friendly as in Manchester and especially at the pub we went to the City Road Inn which is brilliantly set just around the corner from the Rebellion and they do the tastiest pies and sausage rolls – all served by Mrs Patterson herself! (Well Kay really) Nothing is too much trouble and it is a nice oldie worldly pub that you can just relax in.

Making a day of it was really a great idea as when we arrived, outside The Rebellion stood the tour bus and trailer and it wasn’t long before Georg from the monumental Monument of Misanthropy and his lovely girlfriend Sonja was standing in front of us – something I had only ever dreamed about after funding the band on their first album Anger Mismanagement and remaining friends with them to this very day. We also met JP who always had time to chat and tell me the latest going on from the band and what they were up to. Just after that, we met Cedric the powerful kick beater and later Sam.

During our stay we also caught up with The Drowning – such nice guys who had travelled over from Cardiff and were first on stage but not before downing a few pints and pies.

It was interesting as it was funny learning about the skills of how to sing like a death metal pro! As Matt the bands hulk demonstrated and was chuffed to hear that, I love those vocals and that hearing them live would be an honour and absolute pleasure as it more than floats my boat… maybe not to everyone’s taste but as I mentioned it is music you can feel inside your body and where the aggression comes into play and it isn’t that you want to kick someone’s head in aggression either it just has its feel-good factor and people need to express it by forming a large mosh pit and using all the space possible.

Time seemed to fly by and The Drowning took to the stage and replayed some of their special blend of dark doom although for me it sounds more prog death as the guitars really bring the sound alive and although some of the tracks were slightly slow, did not really give off a doom-laden effect and had more of an uplift to it, but it is what you take away from the music at the end of the day and I could have listened to them for a lot longer than 30 measly minutes that seemed over in a flash. Matt’s vocals were hellishly good – his tall frame outlined by the blue backlight on the stage made him look even more menacing as he growled out his repertoire and funny in another sense that he is not exactly a small guy but only by name! Richard’s hair seemed to swamp his bass as its hooks came crashing down around your ears and juddering the gigantic speakers into submission. Mike and Jason made up the riffs and went above and beyond to fulfil their duties on the Rebellion stage while Steve pounded hell out of his kit in front of the Vadar banner!

It was a pity a lot more hadn’t turned out to see this amazing band – but it is always the same nowadays, people are so fickle and say they love metal when in fact it is just the main bands and really the support bands don’t get a look in, or if the people do arrive earlier they spend time in the bar playing Candy fucking Crush – and they call themselves Metal Heads? More like Meat heads!! Still it was them who missed out on a good band.

The changeover was smooth and very professional as MoM or to give them their full and precious title Monument of Misanthropy (from Vienna/France who started out by Roman Goulon who played drums with the band for a short period of time before handing the sticks over to Cedric) and if you think the band name is a mouthful – you should hear the music! From start to finish there was no stopping, no messing about just straight in your face metal, aggressive and bludgeoning until the end. The fire started in Georg’s throat and nearly set the place on fire, JP’s guitar certainly sprung to life with fast and devious riffage while Sam held his bass in a strange pose and played the neck of it rather than the body which really added a new dimension to the set. Cedric’s feet must have been worn down to the bone as they never seemed to stop moving and whacked out double kick beats in dramatic fashion. The stage was shaking and the music again could be felt deep within the body. Monument of Misanthropy are an Empire – and it certainly Strikes Back!

The creepiness from the band’s first album Anger Mismanagement is memorable and kicks ass no matter how hard you look at it. It is unrelenting and really, personally I don’t think they are getting the recognition they deserve as they too have the potential to become as popular as Vadar and Immolation and hopefully in time, if people stop being so anal will branch out and listen to other bands other than the ones that are already established and give them a chance. 29 and 34 years is a long time for bands to be playing and I have nothing against bands like Vadar and Immolation but feel there needs to be new blood injected into the scene once in a while, to stop it stagnating and Monument of Misanthropy as well as The Drowning deserve to be crowned and take their rightful places alongside these two great established acts for sure.

The breath-taking array was all pulled together by a team that were more than in tune with each other, everyone played their part and made it work. After a number of years following Monument of Misanthropy I can finally say I have seen them all in the flesh now and they didn’t disappoint live in any way shape or form. Their music compelled you in such a way that you remained transfixed to the stage unable to move, and for me this set could have lasted forever!

Once again the changeover was smooth as Immolation from Yonkers got underway. Formed in 1988 you would be stupid to think they weren’t going to deliver the goods and more after 29 years on the scene they hardly needed any introduction. The room had filled up considerably more and was now resembling a can of sardines as a large row formed in front of the stage, hair brimming in the audience as well as on stage as the band started their first number and it wasn’t long before that familiar mosh pit formed and heads were rolling in front of the band as each riff and mastered beat took hold of them and wound them all up like clockwork toys – the atmosphere changed in the blink of an eye and everyone three rows in from the front were just compelled to drive themselves around the small space to a sound that was brought to you straight from the bowels of Hell. I was so glad I had taken refuge in what I called the Royal Box along with Oggy who had taken over camera duty for the evening.

The bands complex sounds were harsh and duel between two guitars – the power chords spat out some engaging but very important riff factors that progressed the tracks and kept the audience moving. However, there was a moment when things stopped as there was a slight technical hitch but I doubt the audience minded that much as it meant the band would be on slightly longer.

As with Immolation and the bands before the changeover again went smooth and now Vader from Poland hit the stage. They have been going even longer than Immolation 34 years in fact, so again, it was no surprise that the band drew the crowds in and created a spectacular scene of top notch aggression, raw power and absolute annihilation. The pit opened up almost immediately and became a black void – all you could see in the darkness were hair being thrown in every direction while the band towered above the crowd and had them eating out of their hands.

They were complete and utter beasts who devoured their audience whole. Track after track just rained down on the crazed beings that were being manipulated by the tremendous sounds that surrounded them and the only thing that made them stop was the end of each monstrous track before the band dived into another one and so on.

It was a tremendous night of amazing music, and good natured people. Despite the aggressive music, everyone was in high spirits after seeing their favourite bands. The merch stands were chock a block with some great designs, CD’s and badges.

As the crowds drifted out into the great wide yonder it is certain they will take with them some fantastic memories that will live with each and every one of them forever.