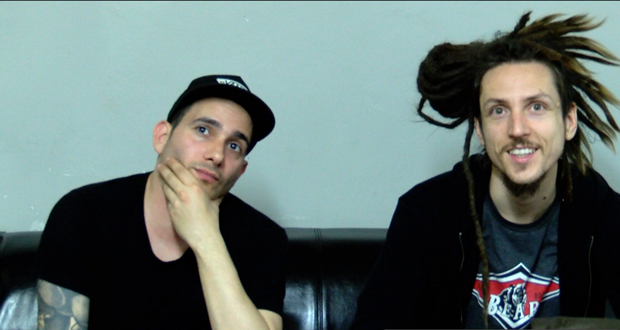 Destrage have started to make a name for themselves over the past few years, touring with bands like Sikth, Protest the Hero and Periphery and while they still have some ways to go in terms of making a fan base in England but are certainly no strangers to our shores, I spoke to Paolo Colavolpe and Federico Paulovich where we discussed influence and Djent.

Starting out I asked about the current European tour with Periphery and The Contortionist.

Federico: “It’s been great, it’s a very cool atmosphere and environment, we’ve been friends with the band for quite a while now, it’s been good so far, great venues, great audiences and there’s a good chemistry with all the band members”.

Paolo: “We knew The Contortionist from the previous European tour with Protest the Hero and also the guys from Periphery are super cool, super kind and it’s just like a group of mates going around Europe”.

Federico: “This band [Periphery] was definitely on the list of people we wanted to tour with”.

If one was to listen to Destrage’s second album, The King is Fat N Old, and their most recent album, Means to No End , it would be fairly understandable to think both albums came from different bands, when questioned about the evolution of their sound Paolo and Federico had a considerable amount to say about their growth as musicians.

Paolo: “Our music as persons is constantly in evolution and of course we change, we were a bit younger when we made “King is Fat N Old”.

Federico: ”what I would say about the possible meshing of other bands on tour, it’s not really a matter what kind of music we play but it’s much more about attitude of the band itself and for this reason I mentioned a bunch of different names that do very different genres but it’s the attitude that sticks them together, that’s the main idea we employ”.

While on the subject of influence and their peers it didn’t take long for me to feel the need to ask about where Destrage fit in the pantheon of Djent and even if they considered it a genre.

Djent began as an incredibly niche genre and has since grown into something of an umbrella term applied to Progressive Metalcore bands like Destrage.

Federico: “It’s okay with us, some people don’t really know how to describe our music, I don’t think there’s as much Djent in our songs as many other bands in this tour for example but if you can hear some Djent that’s fine but we didn’t make it on purpose but if it happens then so be it”.

Paolo: “Djent is not only a matter of notes but also of sound and we definitely don’t sound like a Djent band like Monuments or Periphery or all of this wave of bands but we don’t have labels”.

Federico: “Yeah, if you see Djent in our music that’s fine with us, we don’t fight against it and we don’t work to appear as a Djent band”.

And concluding the interview was simply a question about how each individual member discussed how they wanted Destrage to sound in the early days.

Federico: “I don’t think this ever happened to us, we never threw a bunch of albums on the table and said “this is the magic recipe to make our music, let’s make like 10% Metallica, 20% Death et cetera”.

Paolo: “Especially since we all came from different backgrounds, from our Core to New Wave of British Heavy Metal to American Metal”.

Federico: “It’s not calculated, it’s very spontaneous, at least in our case”.

Destrage’s latest album A Means to No End is available now through Metal Blade Records.