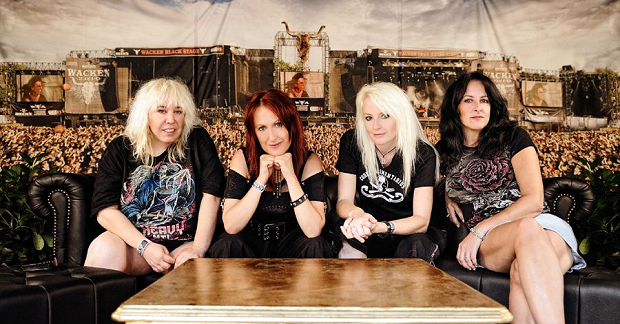 Girlschool are a British heavy metal band. They formed in 1975 in Wandsworth, South London and are named after the ‘B’ side of the Wings single ‘Mull of Kintyre’. Nowadays they are closely associated with their contemporaries, Motörhead.

After releasing their first single — ‘Take It All Away’ in 1978 — Lemmy offered the band a support slot on the Motörhead Overkill tour in the spring of 1979. At about this time the NWOBHM was exploding across Britain and the band entered the studio with an experienced producer [Vic Maile who had already worked with The Who, Led Zeppelin, The Kinks and Hendrix.] Maile managed to capture, perfectly, the raw essence of the all-girl group. They released their debut album titled Demolition in June 1980. At the same period, records by Judas Priest, Saxon, Def Leppard and Iron Maiden were hitting high positions in the charts — this explosion of interest in British heavy metal helped propel the girls forwards upon their career.

Now, as the band prepare to release their brand new studio album titled Guilty as Sin (produced by Chris Tsangarides) and also to embark on a huge tour with Motörhead and Saxon, we talked to Kim McAuliffe about the making of the new album and about becoming older (though not necessarily) wiser in the world of rock ‘n’ roll:

We wanted to know all about Guilty as Sin.

“Basically what happened was we recorded our last studio album Legacy about 8 years ago. Actually, as far as I was concerned, it was about five years ago! [Laughs out loud.] So everyone was saying it was about time we recorded a new one.”

“But, of course, I was thinking: a) Do people really want one? and b) What the hell are we gonna write about. Because after 12 albums (I think this our thirteenth but to be honest I have lost count) there is only so many songs that you can write about getting drunk and falling over!”

“So, this has been going on for a couple of years, right? The record company and the management kept saying “It’s about time…” And the fans kept saying, “When are you gonna do a new album…” And I kept thinking “We’ve only just done one…” Then when I realized it was that long ago, I decided that we had better start thinking about it.”

“So basically Enid, Jackie and I are the main song-writers. And I think, over the years anyway, if you see something that might be a good thing to write about… Or hear something… You tend to jot down things, a riff say. Or if there is something going on in your head, I normally sing it into the little Dictaphone thing, you know. And so, over the years, we all did have some bits ‘n’ pieces.”

“Then about this time last year we got a phone call from Tommy our manager who said, “Right, that’s it. You’re booked in. The record company want you to do it with Chris Tsangarides!” What? We haven’t worked with him for thirty years, like. And then [Tommy] says “Well, anyway, you’re going in on 23rd January and it’s been booked for 3 weeks. To start off with…” What? I thought. You’re kidding! We had been talking about it for two years and finally it was happening.”

“We literally blew the dust off all the ideas we had (I had a folder) so it came together quite quick. It was a good way of doing it. Rather than us having too long to think about it.”

We wanted to know how Chris was. He has been ill recently.

Has the band tried out any of the material live yet?

“Yes, in America. We did ‘Take it Like a Band’ and ‘Revolution’. And they went down really well. We thought “Blimey! This is alright! We are playing songs that people haven’t even heard and people are going nuts!” So we were really encouraged by that.”

So the album is called Guilty of Sin — Does the band have anything to feel guilty about?

“Yeah! Loads of things. But I am not going to go into that right now. [She laughs out loud.] Bloody Hell! It’s been thirty-seven years… So yeah! Don’t regret anything though! It’s just a bit of fun, really.”

We wanted to know if the band still think that they are part of the rock ‘n’ roll revolution?

“Er, no. We can’t be can we? What? After thirty-seven years? But Enid wrote a song called ‘Revolution’ which the album opens with (although the album title track is ‘Guilty of Sin’.) It’s all about people basically getting fed up with everything in the world. ”

But wasn’t Girlschool all about rebellion in the early days?

“Yeah, I suppose. But basically the old story is that we didn’t set out to be an all-girl band… We had no choice (literally) because the guys that we knew didn’t want girls in the band. It was as simple as that. And, to tell you the truth, we weren’t that good anyway… When we started off. Me and Enid decided we wanted to be in a band before we could actually play. But all the blokes we knew who were in bands were saying “Don’t be silly. Get lost…” So the only way we could actually be in a band was to find other like-minded girls. Lucky enough Enid knew a girl who played drums in the local Girl’s Brigade — so that’s how we started off. Just the three of us then. And we just grew. And got a brilliant guitarist called Deirdre Cartwright (she is now best known as a jazz guitarist.) She was so brilliant. And a bit older than us. She ‘brought us up’ and she taught us. Because she was so bloody good we were able to play gigs. Then after Deirdre, Kelly joined and we began to tour all round Europe to all the shit-holes in Europe and Britain (sleeping on top of our gear in an old Bedford van)…”

“Then a friend of ours started City Records and he wanted to record us. (This was the punk-era when anyone could do whatever they wanted.) He had already put out a single with U.K. Subs who were great friends of ours (we were actually sharing a flat with [drummer] Pete Davis at the time…) And so we said “Of course!” And one afternoon we went into some dingy basement in Soho and knocked out “Take It All Away.” And when we had done it and were going out, we saw John Peel at the top of the stairs. We got talking to him and he played the single on his radio show. Then Lemmy (who was looking around, at that time, for a support band for his first major British tour) invited us to link-up. And that’s how it all started!”

“So, as you can see. We didn’t actually mean to be a girl band. We didn’t set out to be. But, of course, we weren’t stupid. Once we started playing, and we got a lot of attention, we realized it was not a bad idea at all. We would have been stupid to change it!”

So, is the band still close to Motörhead?

“Yeah! Well as close as you can be to people who live thousands of miles away. I still keep in touch with Eddie [“Fast” Eddie Clarke] who lives in Spain now. And Philthy. The ‘oldies’ I keep in touch with. Everyone thinks we still get together down the pub. But, no, it can’t happen. The last time we really hung-out with Lemmy was a few years ago when we played with them, Kiss and us in Montreal at a festival. That was brilliant! We caught up then. And, of course, we are touring with them soon. It’s a great honour for us. We were there at the beginning. And now we will be with them on their fortieth anniversary!”

Why have you decided to record the Bee Gees number ‘Stayin’ Alive‘?

“Well, it wasn’t our thinking. We always do a cover of a favourite song of ours. Normally it’s a glam rock cover. I was out of ideas. Last time we did ‘Metropolis’ which is a Motörhead cover. And the others were arguing. And Tommy (manager) said “What about ‘Stayin’ Alive’?” Well Enid could imagine it going well. So we got into the studio and Chris [Tsangarides] thought it was a good idea. And he thought it could work. We didn’t want to sing the stupid “Hah! Hah! Hah!” bit… And we said “We’re not doing that…” And Chris said, “No, of course you’re not… Do it on guitar!” Genius! So everyone loves it! People have said it’s one of the best things on the album. It’s heavy. You can recognise it. But it has still got our identity.”

Over all these years, meeting and performing with so many big names — does she ever get star struck?

“Well, actually, the only time I have been star-struck really was when I was lucky enough to be back-stage at Live Aid (the first one) this was the days before mobiles you understand. And there was a bank of phones off stage. So I decided I would phone me Mum and tell her what’s going on… And, while I’m on the phone, I look around and there’s David Bowie standing there. And my knees just went. And I could hardly breath. There he was in all his glory! I was trying to tell me Mum that he was standing next to me but I couldn’t speak! “What’s the matter?” My Mum was saying. So I tried whispering, “It’s David Bowie… It’s David Bowie…” So she said, “Go and say ‘Ello to him!” And I hung up the phone. And just stared at him! I couldn’t even walk! So that’s how I know what it’s like to be star-struck!”

‘Take it Like a Band’ from the album is already out as a lyric video.