Coming out of Lisbon, Portugal Miss Lava have been cutting a fiery hole in the metal stratosphere, their 2009 effort ‘Blues For The Dangerous Mile’ delighted critics with their powerful blend of stoner rock filled to the brim with massive riffs. We caught up with guitarist K Raffah to pick his brains about their anticipated follow up ‘Red Supergiant;’

What was it like receiving such praise ‘Blues For The Dangerous Miles?’ Did this praise put pressure on you guys to deliver for ‘Red Supergiant?’

“Some pressure yes, but mostly because of time issues. I mean, the reaction to “blues” was so good that we never stopped playing live. That meant that we had to learn new writing processes, using soundchecks and different timeslots on rehearsals. And it wasn’t easy! For the first album, you have no time pressures at all. When you start playing live, most of the songs are already done. At least for us it went like this.”

What major influences do you have as a band?

“Well I guess heavy stoner rock acts such as Clutch, Monster Magnet or Orange Goblin, but also some stuff like Entombed. Everything that rocks and has blues roots actually.”

How does coming from Lisbon a major city, effect your sound?

“We’re constantly getting exposed to lots of new music and new bands, so I guess that has some kind of reflection on our sound. Its amazing how touring and playing with different bands from different genres can have an effect on you. For instance, playing with death metal bands we discovered that the swede sound comes mostly of the hm-2 pedal. We use it on the new record a lot.”

How did you come up with the albums title?

“It reflects the tension we hand in the band during the completion of the album. Our bass player produced the record, but we had a grammy winner on the other side of the world mixing it. And when you say ‘oh, we don’t want it like that, we want it more like this..’ things can become a little edgy. Also, everything that could have happened wrong did go wrong. We almost lost all of the recordings due to a failure on the disk, our bass player broke his arm in the middle of recording his album parts… I mean it was not a smooth ride. Red Supergiant is the life stage in which massive stars have a lot a tension inside, just before exploding into supernovas. It just felt right with what went on. Ahhh… and it sounds good!”

How do you think you as a band have developed from ‘Blues…’ to ‘Red Supergiant?’

“The songs are better. This time around, we were much more focused on each idea for a song, whereas on ‘blues’ we would just put 2 or 3 ideas on one song. On some stuff we sound heavier than ever but there are some songs in which we are exploring more atmospheric textures as we never did before. And it all sounds like Miss Lava.”

What is the writing process for you as a band? Does each person have specific area or is it a jam session? 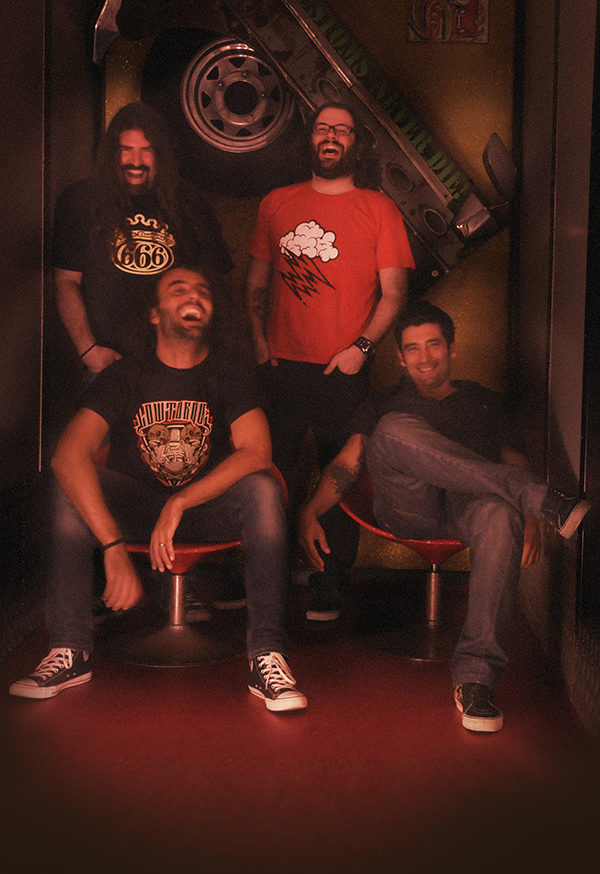 “Normally one of us comes up with a riff or an idea and we all work on it. And we can work on it jamwise or just throwing riff after riff and discussing it. There really are no rules. But it’s always a collaborative process.”

What was it like working with Matt Hyde? (Award winning mixer and engineer)

“We learned a lot with him. I think he added a lot to the album, and the mix has been having a lot of praise. He’s a great guy. The only thing I can stress out is the process we had. Working at distance has its downside. When you’re right next to a person in the board room you can say I want a little more of something and work it out in like 5 minutes. When you’re writing e-mails back and forth it takes a week…. And the process begins to be longer than expected… and then you collide with his agenda, ‘cause Deftones are entering the studio next week… and then it takes another 2 months until your hear something new… you get the picture.”

Why did you pick ‘Ride’ as the first single?

“We think it summed up the album, with a heavy thrusting chorus and more spacy verses. It’s like the closer you can get to hearing a bit of everything there is the record. So it seemed like a good ‘presentation single’.”

Where did you get the inspiration for the video? It looked like it was fun! Was it?

“It was a lot of fun. Actually, thing just happened one after the other. After e-mailing our friends saying we where going to the USA and play the Whisky a Go Go, Joerg (the director who did our video for “Don’t Tell a Soul” and the Truckfighters doc) replied saying he would also be there at the same time. We instantly thought ‘let’s drive to vegas and do a video’!. When we got to Vegas, it was a real ride, finding the car, shooting in roads with cars passing by, discovering that bar…. And dancing with that lady!!! She had had like 5 husbands or something! Only in Vegas!”

Are you pleased with ‘Red Supergiant’? Did it reach the heights that you set yourselves?

“Yeah, we’re very happy with the album. It sounds killer. Heavy, punchy and crystal clear at the same time. And we’re really happy with songs. We still crank it up in our cars which is a good sign!!”

How far do you see ‘Red Supergiant’ going? Do you think it will do even better than ‘Blues…?’

“I think so. We expect to keep moving on. We actually see ‘Red Supergiant’ taking us to different countries and different tours. So far, the reaction is great!”

“Tours and shows and tours and shows and blood and sweat and tears! We’ve got some festivals in Portugal and some shows in Europe! New videos and maybe a deal to make the album have a wider reach. Let’s see what happens! And we’re gonna welcome two new babies to the Miss Lava family! J. Garcia and S. Rebelo are gonna be dads! So things are gonna be rockin’ and screaming! Hahaha!”

Thank you K Raffah and good luck with the release!

Check out Miss lavas video for ‘Ride’ below: