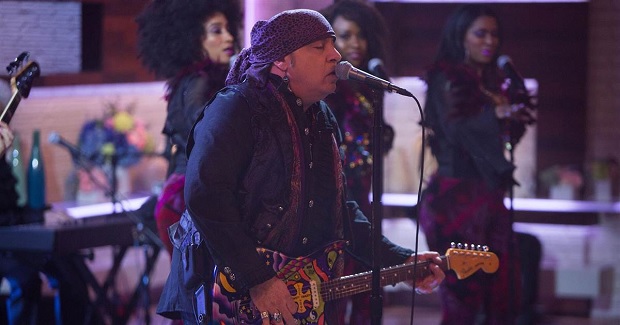 On Thursday the 26th of July, a day before his well awaited live show at Shepherd’s Bush Empire, Little Steven has hosted a very entertaining ‘Underground Dance Party’ at one of the ultimate rock ‘n roll locations, the Hard Rock Cafe in London. He arrives bang on time and greets fans and press just before introducing his DJ set. Little Steven is currently touring Europe performing with his 14-piece band Disciples Of Soul in support of the new album ‘Soulfire Live!’. We get to catch up with him in the more intimate haven of the Hard Rock Cafe, the Back Room which represents the perfect setting for such a rock ‘n roll legend.

Great, really great. The audience has been amazingly enthusiastic. It’s a good feeling, especially after being away for so long.

What do you expect from your London crowd?

Well, it was one of our best shows on the last tour, so I expect it to be the same again. Looking forward to it you know.

What are the main things that you like about touring?

I like the uniqueness of the countries in Europe, every two, three, four days you experiment different cultures. I like that, it’s interesting to me. It also shows you the universal appeal of music, if you get the same reaction in ten different countries it gives you a feeling of satisfaction, like you actually have accomplished something.

Last year you released ‘Soulfire’ and you also recently released a live version of it, what can you tell us about these albums?

Well, ‘Soulfire’ was my first album in a long time, like twenty years. I didn’t write much of it, I used songs I’ve written for other people. I did a couple of covers of James Brown and Etta James and then over the course of a six months tour we added another 15 songs or more. It’s all part of the package of the live album, you get the basic album live plus twenty songs or more that were not on the album and that I re-arranged for this tour. I don’t like a lot of live albums ‘cus they are usually an inferior version of the original album but in this case I have a lot of re-arrangements that are different so it justifies its existence.

You are obviously a multi talented man, how do you find the time to dedicate yourself to so many different projects?

I think if you love it, you find time to do it. I am lucky that way. In my head I got a hundred things I’m not getting around to. I’m actually quite frustrated that I’m not doing more.

You shouldn’t get any sleep then.

If I could I wouldn’t sleep at all. I sleep around five hours and that’s too many.

Do you prefer acting or playing music?

I like it all. Both acting and performing are fun but the real thing for me is the creative stuff, which is writing and producing. That’s the main thing that gets me on.

You probably already knew this question was coming but is there any particular episode you’ll never forget from your time with Bruce?

(Laughs) The final episode of ‘Lilyhammer‘, for the first time Bruce is acting and I directed the episode, that was very memorable to me. There were only 24 episodes of the show and I’m quite proud I directed Bruce’s acting debut.

Talking about acting, what’s the best memories you have from ‘The Sopranos’?

I think in general just working with Jimmy Gandolfini, the great friendship we had, we connected right away, really miss him every day. And I’m glad I’m still friendly with David Chase which is a real positive thing. As the creator of the show, he saw in me that I was an actor, I didn’t see it. I owe him a great debt of gratitude.

Do you think you also gained a different kind of audience from ‘The Sopranos’?

Yeah, when ‘The Sopranos’ first aired we had reunited the band after a long period off so Sopranos’ audience was younger and when the first season came on also the first reunion tour happened, right at the same time. I remember Bruce was introducing me as ‘the star from The Sopranos’ (laughs) and at the beginning the audience was thinking ‘What’s that?’. By the end of the tour everyone knew so that was interesting.

What’s the plan after touring Europe?

I am trying to write a new album which I am doing okay with. We are trying and get it recorded and then do one more American tour and if things go well I will do another TV show, put the album out and do another tour.

We are dedicating the tour to teachers and inviting them to come for free and we are gonna keep doing that just to say thank you to them and bring them a little attention.