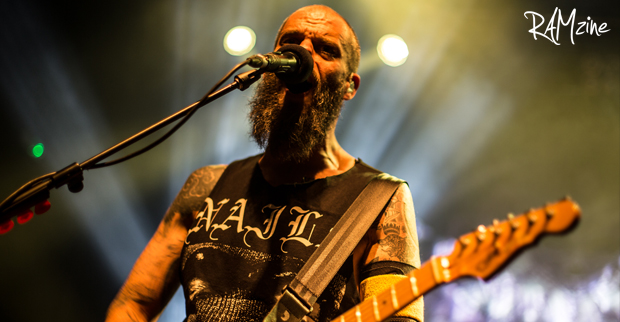 Tuesday night shows. Does it get any better than this? Fans are flocking to the KoKo in their masses on this cold winter night for what looks to be an exciting sold out show with Baroness bringing their colour to the stage in support of their latest offering ‘purple’. The bill only consists of a mere two bands tonight but the 11pm curfew still remains which has everyone wondering if we will see an extended set from the Georgian four piece. With those wonderings, the Baroness fans are in for a treat because tonight their set list consists of a whopping 18 songs. There will be some tired faces in the morning when the punters make their daily commutes to work but one things for sure, they are certain to be happy tired faces.

The support tonight comes from the interesting Irish trio No Spill Blood who have been supporting Baroness on this run of UK dates. Immediately it’s clear why. They are an interesting band to say the least and compliment such a line up perfectly. Whilst the venue sound didn’t do them any favours, they open up and work on the crowd with their eclectic and sometimes confusing sound that can only be described as someone screaming along to what could be the Knightrider theme tune. But to the fans, this is a welcome change to the fairly generic and somewhat stale metal bands found in today’s music scene. Imagine a toned down version of ‘The Sword’ add in a man measure of LSD and garnish with a lethal does of keyboards and you’d be somewhere along the right lines of how this sounds. Its wonderful psychedelic rock and its very much welcome at the KoKo tonight.

At this point you can tell that the bands have all the time in the world for their equipment changeover given the small bill and there is a certain aurora in the air as the anticipation for Baroness heightens. Bodies are pressed together in the warm and sticky environment, but who cares because tonight Baroness are special. Very very special. With the sound cleaned up now and the band on stage the party begins. As expected, the set list is ‘purple’ heavy with a whopping 9 out of the albums 10 songs included in this set but given just how good this album is, the fans eat it up. With ‘Kerosene’, ‘Morningstar’ & ‘Shock me’ all in the first chunk of songs, there is a clear love demonstrated through loud jubilant sing-alongs. Rest assured though, the ‘Yellow & Green’, ‘Blue’ and ‘Red’ albums are all well represented tonight too.

Baroness are on form. In fact they are more than on form, they are simply exceptional and ooze energy and excitement on stage clearly loving every second on their sold out London experience. It’s the last date of the UK leg of the tour and it is without a doubt, a show that we as the fans can only hope the band loved as much as we did.