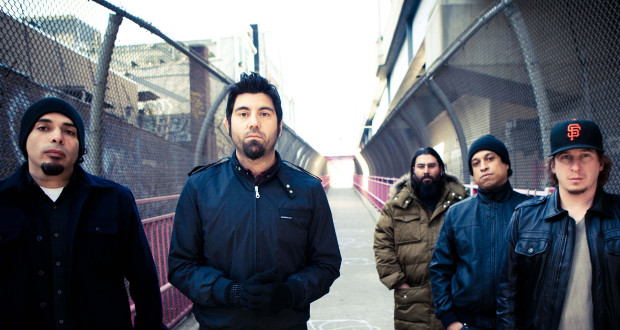 Sacramento alt-metallers Deftones are a band that require very little introduction. This multi-platinum, Grammy -winning quintet have been blazing a trail across the rock world since 1988 with their delectable fusion of face pummelling aggression and shoegaze/psychedelia, and have amassed record sales in excess of ten million worldwide. These guys now look set to tear the globe a new one with the upcoming release of their eighth studio album – the incredible “GORE”.

Although the album itself isn’t due to drop until April 8th via Warner Bros. Records, fans can get their pre-orders in right now via  http://www.deftones.com. Those who pre-order will also receive an instant download of the first single, “Prayers/Triangles” and now brand new second single “Doomed User”.  The album was produced by Matt Hyde and Deftones.

Says Deftones vocalist Chino Moreno of the album: “Out of respect for Pac, Big, Stevie, Michael, Hendrix, GORE is ONE of the greatest albums not the greatest, just one of.”

In addition, the Deftones music store will be offering an exclusive and limited edition, 180 gram, double LP vinyl version of GORE. This will be limited to 3,500 foil-stamped and numbered gatefold jackets and is available for pre-order here: http://smarturl.it/Gore180.

Deftones hit the road this spring, starting with a March 5th headline performance on night two at Travis Barker’s Musink Festival — a three-day tattoo convention, car show, and concert in California, followed by appearances at this year’s SXSW music festival. May and June will find Deftones appearing at major festivals in the U.S. and Europe, including Carolina Rebellion, Rock on the Range, Rock AM Ring, Rock IM Park, and Download Festival, among others as well as a solo-headline show at Wembley Arena.

You can check out the track-listing for GORE below:

And here are those much anticipated tour dates:

We know where we will be this June – see you at Download!