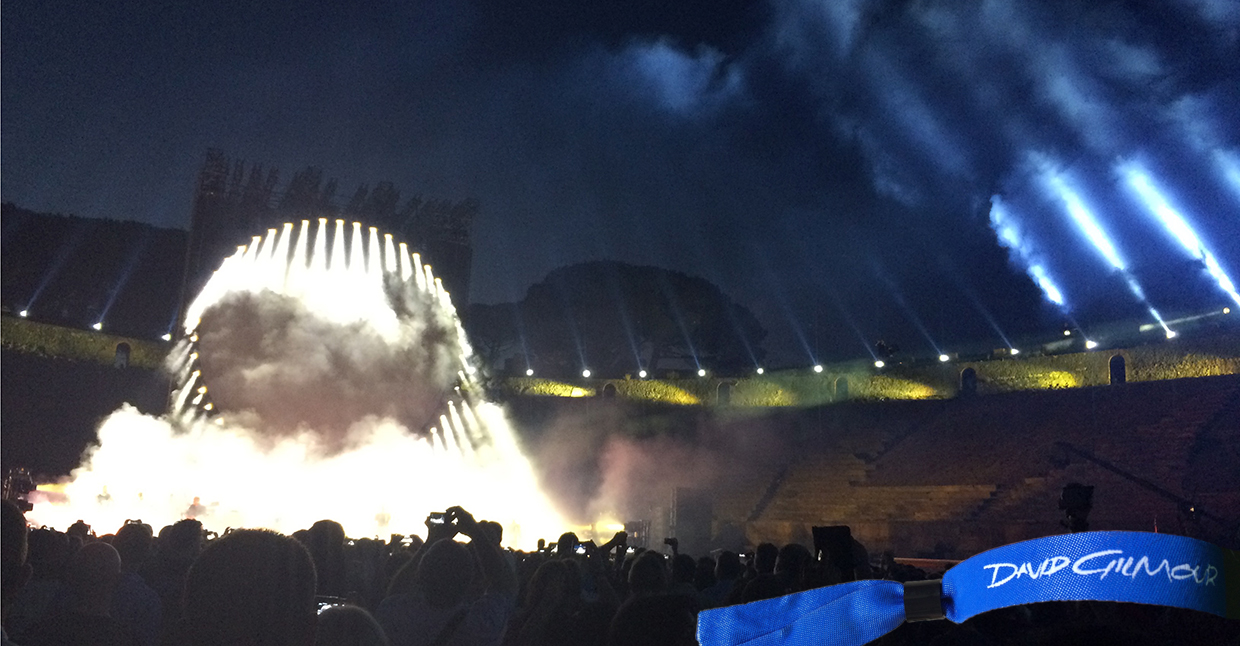 In 1971, Adrian Maben’s vision of blending music with cinematic art took Pink Floyd to the ruins of old Pompeii to play in the ancient amphitheatre. Forty-five years later, David Gilmour returned to play the same venue, though this time to an audience. I was one of the lucky few able to purchase a ticket and see, first-hand, this momentous performance.

I saw the original concert on VHS when I was in my late teens and fell in love with it – I was awestruck by these four guys in front of a wall of speakers playing to no-one but the production crew in such a surreal setting; they assumed god-like status in my mind. When the opportunity arose to see Gilmour play at the same venue, I had to take it, whatever the cost; this was a once in a lifetime opportunity.

Despite collecting my wristband around 2pm and spending the rest of the afternoon walking around the ruins of old Pompei, which are far more extensive than I had thought, it did not become real until I had walked through the entrance tunnel and stepped into the centre of the amphitheatre. The setup wasn’t what I was expecting; the floor was covered in boards, there was a huge stage towards the far end, and the entire rim of the amphitheatre was rigged with lights and smoke machines. I couldn’t help but grin as I looked around; yes, it looked different that evening than it did in 1971, but here I was about see David Gilmour play live at Pompeii.

People had travelled from all over the world to witness what was undoubtedly one of, or perhaps, the most incredible show I will ever see – setting me back about €345 for the ticket alone, the production was so impressive that I felt it was worth every cent – I would gladly pay again – whereas in some cases, one might feel they have paid too much.

The lighting and the intimacy of the show really did make it a once in a lifetime experience – never have I seen better use of lighting. Above the stage was a huge circular prjection screen onto which live footage, animations and other visual effects were projected. The screen itself was circled by a halo of lights, each one being able to move independently, which created some breath-taking effects. To be in the arena, under all the lights as they changed colour and swirled around with the music, made this very different from watching a normal show; it was so immersive.

Despite all the phones (and iPads… yes, iPads) recording snippets of the show, there is very little available on YouTube as it seems that people are not permitted to upload them – this is a good thing, in my opinion and makes my experience all the more valuable. However, there were several cameras – and even a drone – capturing the show, so I would be very surprised if we don’t see a DVD shortly.

My advice to you: if you were not there, and if it does appear, buy the DVD; it was the most incredible show I have seen in my life. Of course it will not be the same as having been there, but you will see just how spectacular it was.

David Gilmour’s return to Pompeii exceeded every expectation and will certainly be one of the memories I linger a little longer upon in my deathbed.