Sly & the Family Stone pour out of the house PA, singing about ‘A Family Affair’. It’s fitting. There’s a sense of déjà vu at the Robin 2 tonight; there usually is when Glenn Hughes plays his native Black Country. You’ll regularly catch sight of other musicians who still live locally, maybe a retired footballer and a stand-up comic and someone from the Express & Star. But more so it’s the accents. Rich in their flattened vowels distinguished by a change in volume; slow in speech not because of a misperceived Midlands regional dimness but because like the greatest orators they instinctively know the listener is forced to listen and therefore takes the content more seriously – even when it’s arguing that whatever last album they heard “ain’t worth a toss!”

Tonight’s even more of a local bash with Stone Broken, who come from but two miles down the road in Walsall to take the opening slot on “our Glenn’s” Heavy tour, not only here in the UK but for Europe too. Full of youthful energy and heavy hook-laden songs to match. A few years back we were overrun by new bands referring to themselves as a mix between Alter Bridge and Black Stone Cherry that may have got them a gig or two, but Stone Broken do in mostly the right ways – the Cherry’s bouncing stage, feet on monitors and baseball cap vocalists and the Bridge’s right arm strut on a down-tuned chord being but superficial fashion influences. Musically there’s something reminiscent of The Almighty to them too.

They open with ‘Stay All Night’ and a sizeable contingent of those down the front are local fans so there’re no complaints from that quarter. Deep rhythms, wiry guitar melodies and a powerful lead voice take us through a series of songs from their debut album, before they play a new one due to be recorded for their next with ‘Just A Memory’ coming on like Judas Priest playing Blackfoot. They follow with ‘This Life’ obviously a live favourite as the fans join in singing. You’ve heard the riffs before but they’re arranged well and the singer’s got a fine bellow live (that’s sweeter on record). They attract the casual listener’s attention and that’s no mean feat in today’s music industry.

Dressed in a mix of contrasting reds and blacks a bunch of Scandinavians and a geezer from Cannock stroll on as entrance music fights to be heard over the roar of the crowd. “Welcome brothers and sisters!” calls out Hughes, flanked either side by Jay Boe and Søren Andersen strapping on his guitar, then from the back Pontus Engborg kicks in the beat and they launch into a deep and heavy version of ‘Flow’ from the new album, the audience swaying in time instinctively from the get-go. New live addition Boe takes an impressive solo, the vocal harmonies are strong, and Hughes digs deep soloing on his bass as the song concludes. 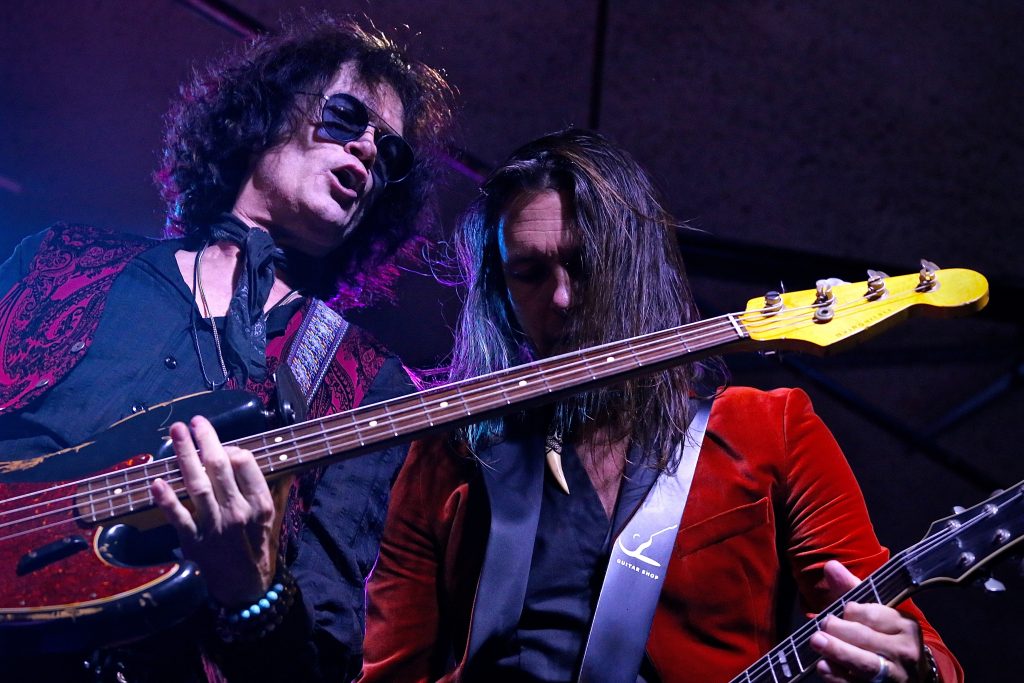 Moving back the decades they’re straight into Hughes/Thrall territory with ‘Muscle & Blood’. It throbs hard rather than following its original AOR strut. Anderson adds some sonic whammy to proceedings before Hughes gives us some vocal gymnastics that bridge us over into Purple Mark IV’s ‘Getting’ Tighter’. Rearmed with a Strat, Anderson scrunches in the funky licks and chords as he and Hughes lock into a heavy groove with Boe frequently soloing away. It’s around this point one notices Engborg leaning forward into his drums, giving it all he’s got. Adept at playing songs recorded by others he’s now adding his own distinct personality with fills, beefy prompts and accentuated time changes. Hughes’ familiar wah-wah funk bass solo is aired with a cool melodic range before the band bringing the song home, Anderson’s head banging away in time to the beat. These may be familiar numbers to many of us but many have been rearranged, one also get the impression they’re playing live without a net the way they come in and out of some of tonight’s solos with joyful exuberance. 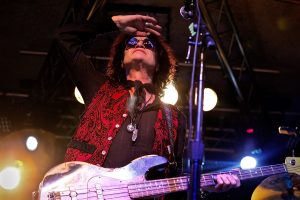 “You may have come here to see me, but I’ve come here to see you!” Hughes declares through ever-present sunglasses. He likes to gab does our Glenn. It throws some off when he does the peace and love, power of God post-hippy new age spiel, but he tells a good yarn dotted with black humour. He’s had two knees done in Santa Monica since he was here 15 months back with Aldrich on guitar, “I’m sure they could’ve done it in Dudley!”  he deadpans, his adopted Californian drawl reverting to his natural Midlands accent with each passing minute. While he’s keeping us entertained Anderson strips to his waistcoat providing eye candy for the ladies present. Frequently producing a purple flower-power handkerchief to blow his nose, “It’s not what you’re thinking!” Hughes chides. Having forsworn sniffing the white stuff, you can’t avoid the green coming down, which probably explain a dryer tone vocally early on in the set. 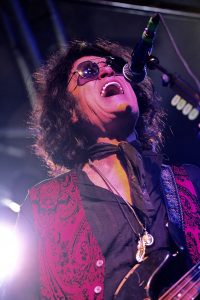 Leading off from the knees story, he tells us the recovery time meant he had time on his hands to write songs and they surprise me playing my off-kilter favourite from Heavy, ‘Stumble & Go’. Anderson lays in slide lines over Engborg’s pounding beat as they thrug it out, smiles on their faces with super three male harmonies. On a more serious note, Hughes reveals how he lost his father last year and his mother was unwell (she would pass away during this tour), and wrote the next song in her kitchen when only 17. The title track from Trapeze’s second vinyl offering, this is a heavily rearranged interpretation of ‘Medusa’. As it moves from its drifting lullaby intro and verse to harder chorus Anderson gives it a metal edge, slowing down during the solo, keeping Mel Galley’s key notes but adding a distorted metal blues feel to it. As the epic moves towards its conclusion musically the piece takes on Rush/Kings X complexities. 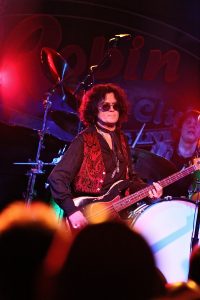 Next up, “A song I wrote in the desert in 2004” features a new heavy blues slide intro for the weighty and great ‘Can’t Stop The Flood’ with some heavy organ duty in play amidst excellent three part harmonies during the choruses. They pick up the pace leaping straight into Black Country Communion’s ‘One Last Soul’;  kaleidoscopically a Beatles feel to this interpretation, Anderson’s excellent rock solo aside. In fact there are several Beatles influences running through this show, what with the harmonies and Hughes channelling his inner McCartney on bass. Albeit there’s too much overdrive on his Fender initially as he tells us it’s “Time to go to church!” and the bass figure of ‘You Keep On Moving’ rings out. As the band join in it fills the sound and he begins to scat – moving to and from the microphone to affect the volume and tone. The audience sings along as  Anderson strokes chords suggestively and offers wailing notes that Hughes’ own vocals soar between; riffing off each other pretty much throughout, taking us beyond mere vocal gymnastics and R ’n’ B gospel nuances to affirm itself truly hymn-like. I’m told new track ‘My Town’ followed but I’m lost in nostalgia as another Purple number follows. Pumping and strutting, grinding with blues funk, Boes’ organ swimming through over the sound as Anderson leans against his speakers wailing out feedback, there’s a triumphant crash, bang and wallop to ‘Might Just Take Your Life’. 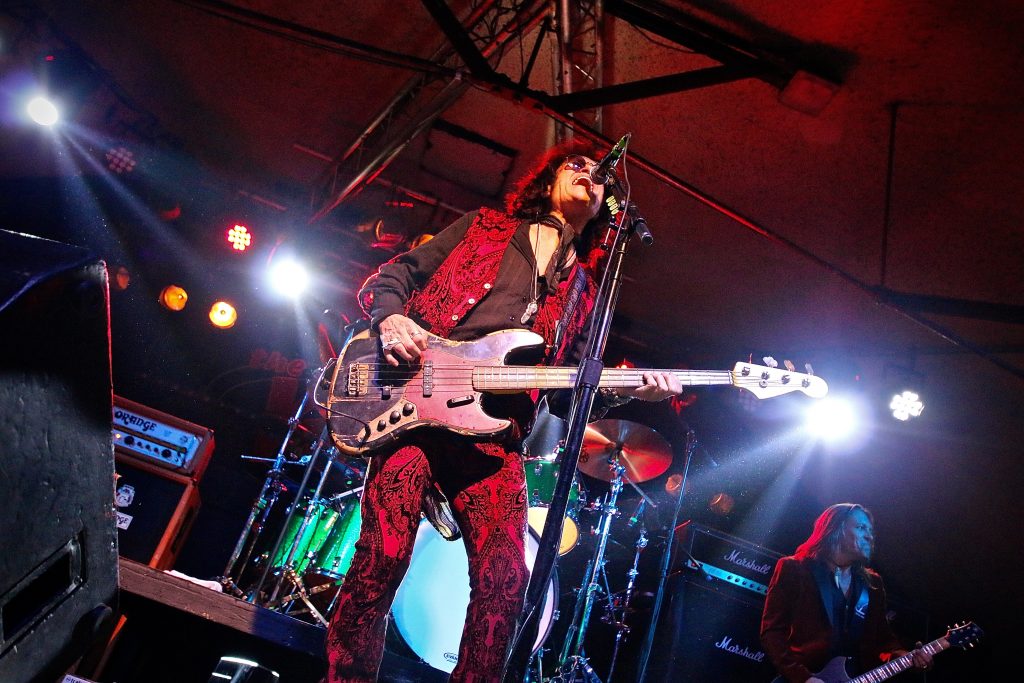 A sassier ‘Soul Mover’ again benefits from the harmony vocals whenever Anderson and Hughes aren’t down the front playing to the crowd who take it as their turn to sing the tune back at them. Finally, we get what’s become our local anthem as Hughes tears into the hard driven trebly bass riff of ‘Black Country’, Anderson giving it some vintage Jimmy Page kerrang, Engborg soloing and Boes’ organ squealing triumphantly as they bring the show to a climactic end. 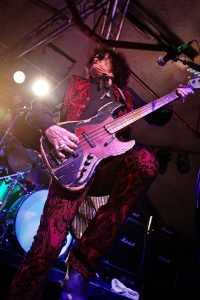 They return to encore with ‘Heavy’ and as I expected this works better for me live than in the studio. We pretty much know what’s coming next but Hughes still has a surprise for us as he brings on Inglorious singer Nathan James “to be “Coverdale” as they storm through ‘Burn’. A big bloke, dancing and headbanging away James’ fresher voice delivers the goods and he holds his own, but a cold-infested Glenn can still toss out a vibrato scat that few can match, even half his age. His bass playing tonight has been excellent; precision, class and flash in equal measures and supported by a hard working band, this has been a rather good start to the week it being only Monday.

“See you in the summer!” says Hughes cryptically as he takes his final bow and the rumour mill begins immediately as to what that might entail for us here in the Black Country.