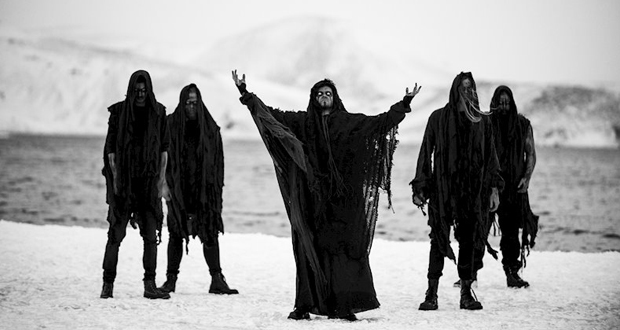 A couple of months ago yours truly had the pleasure of receiving a promo copy of an utterly atmospheric and strangely unsettling black metal record entitled Orsök by the Icelandic entity named Nyrst. While its intriguing and stunning album artwork immediately caught the eye and strongly hinted at great things to come, nothing could have prepared this writer for just how incredibly well-written and captivating the six compositions that constitute this glorious opus truly are. If you wish to embark on a compelling musical odyssey to bleak and surreal dimensions filled with interesting textures and wicked nuances, look no further than Nyrst and the upcoming Orsök. RAMzine caught up with the skilled ensemble in order to learn more about the Icelandic metal scene, their recent gig at by:Larm in Oslo, and how the cold and barren wastelands of Iceland serve as an inspiration to them.

Greetings, and thanks for answering these questions of ours. First of all, let me just say that I absolutely love the majestic Orsök album – I am blown away by how intense, moody, and wildly creative it is. It is a compelling piece of work that is as beautifully crafted as it is effective. What is the atmosphere within the Nyrst camp like these days now that the record is about to be released and are you pleased with how everything has turned out so far?

N: Greetings! Thank you for the kind words. We are tremendously pleased with everything so far and we are looking forward to getting an opportunity to bring this to the live stage for everyone once this pandemic is over. At the moment we are already looking into our next album since we have so much extra time on our hands these days.

The band is relatively new in the sense that it was conceived in 2016, so am curious as to how you guys met and how it came to be that you decided to join forces and play music together? Did you all know each other beforehand and were some of you active in other musical acts and outfits before the launch of Nyrst? There was a band named Skuggsjá, right? But did that entity ever record anything or did some of those ideas carry over into Nyrst?

N: The drummer Sveinbjörn and bassist Egill created this band way before 2016 (i.e. around 2013), but shortly after that Eysteinn joined as guitarist and we started getting more serious about the band. It was a very typical meeting at our main metal bar in Iceland where Sveinbjörn knew that Eysteinn had been playing a lot and was into similar music which then led to the recruiting process. This project first started out as Skuggsjá and none of us had any previous experience from other bands, so there was a lot of early trial and error throughout those years and nothing was recorded. Around 2016 we saw that the early ideas and image for the band were not fitting anymore for the music we were writing. We never recorded anything as Skuggsjá but some of the older songs we kept and we then re-branded it to Nyrst. Two of the older songs were then reworked and ended up on the upcoming album.

Your 2-track demo (which is available via Bandcamp) is quite wicked as well and I find that one pretty captivating too. Was it on the basis of that particular release that Dark Essence Records reached out to you and offered you a deal or had Orsök already been recorded by the time that you signed a contract with those lovely Norwegians?

N: Our demo consisted of two old songs that we thought were worthy of recording and it gained some praise even though it’s not even similar to the music we are doing today. As for our album Orsök, we sent out the album completely finished because the label market today tends to take bands that have already put in a lot of work and have something to show for it more seriously.

I am curious as to the lyrics that accompany the tunes. Is there a specific motif or perhaps an overriding theme to Orsök? Are there one or two major subjects, or perhaps even a concept of sorts, that the record revolves around? A common thread that ties everything together, if you will. The booklet doesn’t exactly give anything away here ha-ha

N: The lyrics depict old Icelandic horror literature with cosmic undertones. It is sort of a concept album but it is mainly how we set the stage for the listener to immerse himself in. We want the listener to be able to experience the barren wasteland and the cold winter here. Each song tells a specific tale.

What does the album title refer to?

N: Orsök means causation, repercussion or a consequence of an event and is related to the lyrical themes on the album. As for your question, the themes of the lyrics are misanthropy, cosmic horror and the barren wastelands of our country. Our main inspiration when writing is the harsh nature of Iceland.

Are there any specific bands and ensembles out there who inspire you in terms of coming up with song material for Nyrst, be that lyrically or musically?

N: Well, we all come from different directions when it comes to music but all of us are of course heavily into the black metal scene. If I had to mention some it would definitely be Emperor, Darkthrone, Immortal and Bathory, but we are also into death metal a lot and the main inspiration there would be Morbid Angel, Pestilence and Gorguts. That being said, the Icelandic scene has had some very good acts over the years with bands such as Potentiam, Carpe Noctem and Sororicide – all of whom have made a huge impact not only on us but on the entire scene here. 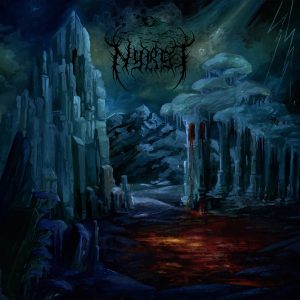 The cover art that is stunning and reminds me ever-so slightly of the epic painting entitled The Opening of the Sixth Seal by Francis Danby (without necessarily being similar to it, mind you). There is something special and hugely evocative about the artwork that adornsOrsök. Are the visual arts something that you take great interest in and is there a deeper meaning or significance behind the one that graces your record?

N: Yes, definitely, as we look up to renowned Polish painter Zdzisław Beksiński a lot. He did some incredible paintings in his lifetime. Our main theme for the cover was to convey the barren Icelandic highlands but keeping some cosmic elements as the lyrics go in that direction.

How did the recent performance at the by:Larm festival in Oslo go? Forgive my ignorance here, but was that your first-ever gig abroad under the Nyrst moniker? Speaking of which, are you planning on touring Scandinavia and the rest of Europe later on in this year or early next year (depending on when the impact of the COVID-19 virus starts to lessen and dissipate)? Have you given any thought to playing Orsök in its entirety live?

N: The gig went very well and we loved playing and staying in Oslo! And yes, that is correct – this was our first gig abroad. Our plans are to hit Europe and Scandinavia as soon as we possibly can and we have already gotten some very promising invitations for 2021.

As to the Icelandic (black) metal scene, what are your thoughts on that one? Is it a close-knit one where everyone knows everyone or is it totally the opposite? Speaking of Iceland, does its scenery and landscape inspire you or serve as a subtle influence in terms of your artistic endeavors?

N: In a country where the capital consists of only 220.000 people and we have two or three pubs to play live, it’s inevitable that everyone knows everyone and this definitely has some impact on the scene. Some bands have almost the same members overall thus less fresh music comes out, but in some cases this is nothing but good. It’s easy to form bands and eventually someone does come up with a fresh formula. We think it’s safe to say that every band here in the scene draws huge influence from our surroundings. With four months of little to no sun and freezing temperatures, it seems next to impossible not to be inspired by it in our opinion.

So what is next for you? Are you hard at work crafting new compositions for an upcoming album or EP these days and if yes, will they be similar to the richly textured and atmospheric ones that constitute Orsök?

N: Since we all have much more free time these days we are working hard to create the structure for our next full-length and the quality of the songwriting will be the same or better, but with a different theme.

Thanks once again for taking the time to talk to us – much appreciated.

N: Thanks and stay safe out there!

Orsök will be out via Dark Essence Records in late April.

Previous: Everyday Heroes release video for ‘Standing Stones’
Next: Jim Davies “This feels like my first proper album” – Interview with former The Prodigy and Pitchshifter guitarist