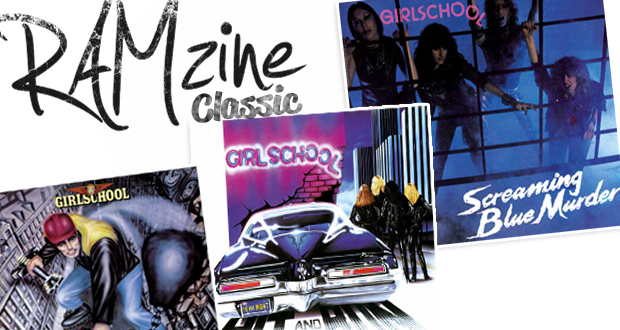 Girlschool, formed in the intoxicating years of the NWOBHM movement, and are the longest serving New Wave rock band in the world, comprising all women. The band remains active today after more than 35 years.

Formed from the remains of a Wandsworth, South London school cover-band — they called themselves “Painted Lady” — Girlschool enjoyed the strong media exposure and commercial success you might expect from a group of four good looking young women who made metal their thing in the early 1980s. Their first three punk-tinged albums are to be re-released later this month on Dissonance, 17th March 2017.

Their big break came when Lemmy, along with Motörhead/Hawkwind man Doug Smith went to see the band’s live performance. They offered the girls a support slot on Motörhead’s Overkill tour in the spring of 1979.

Kim McAuliffe, Enid Williams and Denise Dufort are still in the band. Jackie Chambers took over from lead guitarist Kelly Johnson who left England for the United States, to start a new life with with Runaways bassist Vicki Blue. Sadly, Kelly died in 2007.

Demolition the debut album from Girlschool, was originally released in 1980. It was produced by experienced sound engineer Vic Maile (Little Faces, Jimi Hendrix, Led Zeppelin) and reached number 28 on the album charts.

The first track ‘Demolition Boys’ [ McAuliffe/Johnson] boasts a powerful rock riff that sounds quite similar to Jan Akkerman’s Hocus Pocus (1971) and powerful, speedy drums. This is discontented without being grumbly. Authentically anti-establishment, though still exuberant — in other words snotty enough to be defined as punk.

This album has the Gurvitz [ Gun] number ‘Race With The Devil’ with that famous dramatic overture. Enid Williams’ bass on this is bold and tough. How this version differs from others, notably Black Oak Arkansas, is of course the winning charm of the lyricism. Where there is no dark and gravelly underbelly this becomes a totally different song.

Hit And Run is the second studio album by Girlschool, originally released in 1981. Like its predecessor Demolition (1980), it was recorded at Jackson’s Studios, England. Vic Maile was oncer again producer. “Hit and Run” is Girlschool’s most successful album, reaching number 5 on the UK album charts.

The single from the album, title track ‘Hit & Run’ is a heavy strummer about emptiness and moving on with one’s life. This has cruel slices of guitar and pizazz filled rhythms. The song is a reminder that this is a talented quartet with all four girls all making audacious vocal contributions (here Enid takes a bow.)

‘C’mon Lets Go’ [McAuliffe/Johnson] had a rare MTV video to accompany it back in the day. With thumping drummery and Kelly’s Chris Spedding-style antics on guitar, together with big iron groans, this is a diesel-dirty and fringe-flicking joy. It has enough speed and vibration to start a small seismic reaction. To be fair, it makes Joan Jett’s output from the same period seem kinda tame…

This album also has a kick-ass cover of ZZ Top’s luxury twelve-bar blues number ‘Tush’ [from Fandango and originally sung by Dusty Hill.] The sexist lyric certainly makes you think when sung by a girl. And the guitar-play is simply perfect — but best of all is the cleverly communicated contempt and mutual self-affirmation.

The third studio album is Screaming Blue Murder and this recording saw Enid replaced by Gil Weston [Enid still contributed to the track “Don’t Stop”.] The album was originally released in 1982.

And the second track on this steamroller of an album sees an awesome cover of the Rolling Stones fizzer ‘Live with Me’ [first released 1969.] Together with the conceited vocalisation a la Jagger, and some impudently snotty guitars with brazenly presumptuous bass-work, this is a fine rendition.

We also liked the general concept of ‘Hellrazor’ with its speedy pace and dark rind. Weston’s vocals are expressively melodious on this song without being out-of-place or needy. And the Motörhead influence is unambiguous.

At first plunge, the songs on these exhilarating albums [smartened up on the re-releases] might not have seem as tingling revolutionary as the material from the “next big thing guys” such as Def Leppard or Tygers of Pan Tang. Yet the unfolding dramatic purity and the expressive emotions harnessed by the girls helped elevate these songs to a pre-eminent level.

But it’s also true that Girlschool just wanted to create songs that were exciting and gave them [and fans] pleasure… and that fact — together with the ingrained prejudice against women musicians that was not only prevalent in the 1980’s but also exists now — means that their work was never taken as seriously as it really ought to have been. Media exposition and chart success, then as now, was often a matter of “back-combed hair and fancy costumes” and epithets like “Best Female Pin-up” (Kelly in 1982.)

But singing about sex/romance is always fun and, of course, those subjects are a staple element of rock ‘n’ roll. Girlschool provided [still provide] a much-needed feminine point of view — and no matter who you are and what genre you come from, you can’t argue with that.

Nobody does it better than the originals.

All Releases reissued on 17th March 2017 via Dissonence.