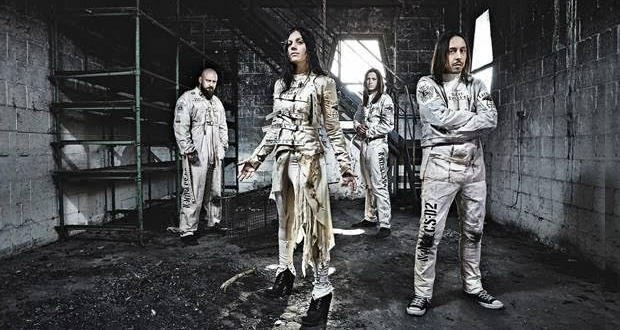 Italian gothfathers Lacuna Coil are back in Birmingham – namely the overflowing O2 Institute – for yet another sold-out show as part of the 2016 Delirium World Tour. With the queue already snaking halfway down the street by 7pm, it’s no surprise that we find ourselves packed like sardines into the smaller room downstairs come zero hour.

The task of opening this evening falls to fellow countrymen Genus Ordinis Dei, and the quartet rise to the occasion delivering a brief but accomplished set seething with brutal potency. Heads bang and fists punch the dense air as opener ‘You Die’ reverberates around the venue harnessing sufficient symphonic bombast and raw fury to engage even the most sceptical of onlookers. Thundering riffs and theatrical nuances collide on songs like ‘Embracing the Earth’, ‘Red Snake’ and current single ‘Halls of Human Delights’, whilst frontman Nick K stalks the stage with a formidable presence reminiscent of Type O’ Negative’s Peter Steele; frequently encouraging the throng beneath him to “throw your horns up!” and clap along. The band are poised to release debut full-length Great Olden Dynasty and on the strength of this performance, it’s safe to say GOD will be departing with a plethora of new followers.

Danish rockers Forever Still focus on showcasing material from current album Tied Down tonight; the exception to that rule being addictive opener ‘The Last Day‘. Maja Shining et al enter stage-left to an enthusiastic welcome and the resplendent frontwoman wastes no time launching into a furious windmill before stomping over every inch of available space. Haunting piano keys run through the blackened heart of ‘Miss Madness’, whilst the boisterous grooves of ‘Breathe In’ and ‘Awake the Fire’ subsequently whet the appetites of those craving heavier flavours. Unfortunately, that ability to veer seamlessly between clean and acerbic vocals doesn’t translate to a live setting as successfully as it does on record, and there are instances where Shining’s delivery misses the mark or feels somewhat forced.

Chants of “Lacuna! Lacuna!” are already echoing around the packed-out room during the short break so suffice to say the place goes wild as the house lights dim, swirling dry ice temporarily obscures our vision and an eerie voiceover booms out over the PA. One by one Lacuna Coil appear decked out in those stained, keeping-up-with-the-sanitarium-theme straightjackets, but its Cristina Scabbia’s potent stare across the audience that ensures anticipation reaches fever point.

Flashlight in hand, she scans the joyful onlookers as the five-piece tear through a blistering opening salvo of ‘Ultima Ratio’, ‘Spellbound’ and ‘Die and Rise’. The inclusion of Comalies-era classics ‘Heavens A Lie’ and rarely heard live (and reworked) ‘The Ghost Woman and The Hunter’ delights the old-school contingent – the former sounding as dynamic as ever and sparking the first of countless venue-wide singalongs. There’s some heartfelt interaction from the LC contingent mid-set with Cristina divulging how their mission (with Delirium) was to create a place “for anyone and everyone who ever felt weak or abandoned”. Judging by the number of bodies swaying as they segue into djent-tinged banger ‘Blood, Tears, Dust’, we would say mission accomplished. Co-vocalist Andrea Ferro has copped flak in the past for being the sonic thorn in his band’s side, but tonight he proves his worth – his vitriol-laced rasps are juxtaposed perfectly alongside Scabbia’s soaring range. The admission that Birmingham “might be our favourite show to date” is greeted with appreciative applause, but it’s a flawless interpretation of Depeche Mode hit ‘Enjoy The Silence‘ that truly stirs the soul. Hands are raised high as revellers aim to render Cristina inaudible during that last bridge and chorus – an admirable effort that is ultimately thwarted by the chanteuse’s effortless vocals.

The Scabbia / Ferro dynamic is omnipresent throughout, but it’s nice to witness interplay with other band members – comedy ensues at one point as Cristina chases bassist Marco Coti-Zelati around the on-stage faux-cell bars. United en masse, emphatic chants of “We fear nothing!” are a pre-cursor for anthemic set closer ‘Nothing Stands in Our Way’ before a 3-song encore. Fusing repetitive vocal lines and Eastern style subtleties, Delirium live is a thoroughly enticing earworm, whilst machine-gun fire riffs offset by ethereal nuances makes for a rousing rendition of ‘The House of Shame’. They’re twenty-two years in the making, but with a back catalogue this solid, and live performances that stay with you long after that final note fades to black, Lacuna Coil will continue to trip the darkness without fear.

Setlist: Ultima Ratio, Spellbound, Die & Rise, Heavens A Lie, Blood, Tears, Dust, Ghost in the Mist, The Ghost Woman And The Hunter, Trip the Darkness, Downfall, You Love Me ‘Cause I Hate You, Our Truth, Enjoy The Silence, Nothing Stands in Our Way. Encore: Delirium, Zombies, The House of Shame.