Wind Rose on the Road to Bloodstock 2017 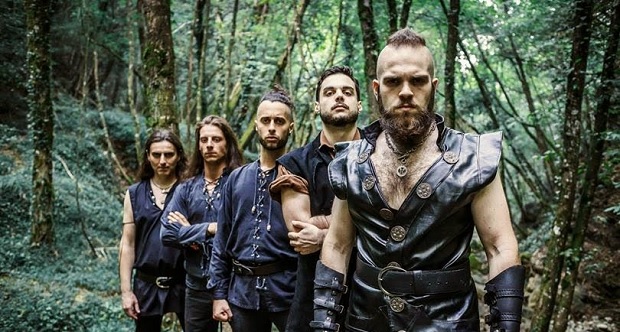 Bloodstock 2017 is just on the horizon, and the full line-up is ready and in place. One thing some fans forget is that there are bands performing on the Thursday night before the festival officially starts, in the past, we have had fantastic performances from the likes of Phil Campbell, ArnoCorps, and Bull Riff Stampede. 2017 sees headliners Battle Beast, as well as Wind Rose, The Infernal Sea, Gurt, and Ramage, Inc. In the first of a series of interviews and features leading up to, during, and after Bloodstock 2017. Recently we caught up with Claudio Falconcini, guitarist of Italian folk-power metalists Wind Rose. Here is what he had to say…

How does it feel to play Bloodstock 2017, the night before it starts?
It feels really good, as there’s only one stage and I believe many people will show up!

Is Bloodstock a well-known festival in your homeland of Italy?
Yes, of course, every metal-head know the festival, it’s hugely known!

What is the rock and metal scene like in Italy?
First of all, you should know that rock and metal are weird things for the standard Italian. By the way, I think that there are more metal bands than rock, but a rock band that sings in Italian has more chances to emerge. This is exactly the reason we left Scarlet Records to search for a foreign label.

I see you wear customised armour on stage, do you feel your image is very important?
Yes, of course, the armour is so important to let people fully dive into our songs.

For people who have not heard Wind Rose – what is your sound like?
Our sound is like a powerful epic metal with a lot of folk elements.

Which other bands at the festival would you like to see?
Wintersun, Ghost, Blind Guardian.

What kind of bands did you listen to growing up?
I listened to a lot of bands, the main ones are Dream Theater, Symphony X, Blind Guardian, Turisas, Angra.

Are fans liking your new record, Stonehymn?
Yes, they do. This album is the first that made us reach a lot of people, they really like how our sound has changed on this album, and we are so happy about this.

How long until the next album?
Not so much, two years or less… let’s say…

What can we expect from your Bloodstock show?
The most clicked songs from ‘Wardens of the West Wind’ and a great part of the bombs taken from Stonehymn!

Do you feel the popularity of Game Of Thrones has helped the resurgence in metal, similar to your own?
Yes, I think so. Metal music is somehow connected to battles, wars and middle age inspired things, so the rise of GoT and Vikings really helped people to hear about metal music.

What is next for Wind Rose?
We are working on the new album and we are planning some shows/tours for the months to come!

Don’t forget you can catch Wind Rose on the Sophie Lancaster stage on Thursday 10th August, at Bloodstock Open Air 2017.

Keep checking for more interview and news from Bloodstock 2017.