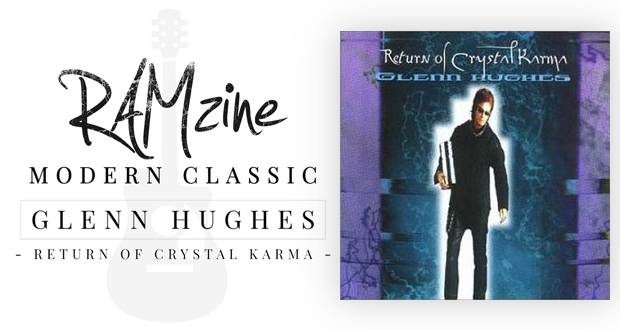 What makes a truly legendary musician? One could certainly argue that the marvelous bassist/vocalist that is Glenn Hughes is the living embodiment of everything that constitutes a legendary artist whose work continues to resonate with lovers of rock music. His work with Black Country Communion, Black Sabbath, California Breed, Deep Purple, Gary Moore, and Trapeze (just to list the most obvious examples) speaks for itself, but what we are to focus on here is one of his solo offerings, more specifically Return of Crystal Karma from the year 2000.

The majestic R.O.C.K. is a bit of an overlooked and underrated gem that deserves much more praise and attention than what has been bestowed upon it previously. Apart from wonderfully kick-ass songs that pack punch aplenty, there are several interesting things about this stately piece of work that warrants further discussion, but we will get to that in a minute. Let us start out with a bit of background info, shall we?

Following the release of 1999’s The Way It Is, Hughes assembled a more solid, stable line-up for the writing and recording of Return of Crystal as opposed to many of his previous outputs where countless guest musicians and session players and whatnot appeared, which resulted in R.O.C.K. boasting a more vibrant sound and lively feel compared to some of its predecessors. As noted rock journalist Malcolm Dome states, “The musicianship, as you’d expect, is tight but never strangles the groove, and what you end up with is an album that is both joyous yet also thoughtful. The entire mood is uplifting, but never naïve” (11). With an insanely skilled cast of musicians including JJ Marsh (guitars), Gary Ferguson (drums), Hans Zermüehlen (keyboards), and Lol Tolhurst (electronica), Hughes laid down the track for the LP in a studio in North Hills, California with Michael Scott and Glenn himself producing the beautiful thing.

Return of Crystal Karma boasts an outstanding selection of tunes that covers a lot of musical ground. From fist-pumping metal and face-melting hard rock and further, on to funk(y) rock and even a decent amount of soothing parts steeped in soul-like music, the record displays a vast array of influences and yet it sounds musically cohesive and coherent all the way through. It rumbles, grooves, and tickles all the senses. There is emotional intensity aplenty here and due to the band having recorded everything live in the studio, the entire affair comes across as organic and full of bombast. Perhaps one could argue that this is the most diverse and emotionally charged musical solo output by Hughes to date?

One of the more noteworthy (and arguably darkest) tracks to be found on the disc is ‘Gone’, which has a rather interesting backstory in that it was composed and arranged by Tony Iommi (Black Sabbath) and Hughes back in 1996. The two had paired up to write and record an album together and they more or less did just that, but the plans were eventually shelved (or put on hold) and the record was subsequently leaked and then surfaced as a bootleg entitled Eighth Star. Fortunately, 2004 saw an official release of that material (The 1996 DEP Sessions). The rendition of ‘Gone’ that Glenn included on R.O.C.K. is spirited and exciting and yours truly prefers this version to its original counterpart. For those hardcore Sabbath fanatics who knew that Hughes and Iommi had recorded several songs together in 1996 (and who had not obtained a copy of the aforementioned bootleg), it was thrilling to actually get a sense of what they had been working on when Hughes issued ‘Gone’ in 2000. As author Garry Sharpe-Young said, “‘Gone’ would make it into the public arena, nestled amongst tracks on Glenn’s superb 2000 solo album ‘Return of Crystal Karma’ (aka ‘R.O.C.K.’)” (281).

‘Owed to “J”’ is a playful and cleverly arranged instrumental whose title is not a reference to the moving Deep Purple instrumental ‘Owed to “G”’ (from the 1975 masterpiece that is Come Taste the Band on which Hughes handled bass and vocals) as such, but a tribute to guitar maestro Jeff Beck, which is what the “J” stands for (Coast to Coast, issue 46).

Perhaps the highlights of the disc are the hard-hitting yet utterly dynamic ‘Midnight Meditated’ and ‘Switch the Mojo’; they are cool and laidback while simultaneously being tighter and hotter in attack than you have any right to expect from a group. Another standout is the epic and moving ‘Days of Avalon’, which brings a tear to my eye every damn time I immerse myself in it (without exception).

The version of Return of Crystal Karma that you need to get your filthy paws on is the meaty 2017 remaster released by Purple Records (Cherry Red Records). The great thing about that one is that it includes an extra disc containing six blistering live tracks culled from a show in Sao Paulo, Brazil in 1999, one of which is a deeply atmospheric rendition of ‘No Stranger to Love’ from the Hughes-fronted Seventh Star LP by Black Sabbath (1986). Its forlorn melodies are as haunting as ever here.

Return of Crystal Karma turns twenty in June this year (2020) and I cannot for the life of me see any reason why you should not invest in this muscular album and celebrate its twentieth anniversary then while contemplating the fact that what you are listening to a modern-day classic. Can you?