Last year yours truly had the pleasure of witnessing the Norwegian prog rock outfit named The Windmill at the 2019 edition of the splendid Close To the Rain Prog Festival in Bergen, Norway, where the hugely talented ensemble blew me away by means of their atmospheric and otherworldly compositions. Everything flowed together so seamlessly on stage that night during their set. This prompted a trip to the local record store the following day to obtain a copy of the band’s latest offering, the remarkably well-crafted 5-song effort entitled Tribus, which is warm and heartfelt symphonic prog rock at its finest. Not surprisingly, I simply had to have a chat with these gentlemen about the theme of the aforementioned album, their musical influences, and what The Windmill’s future holds. So, without further ado, I proudly present to you this interview with Jean Robert Viita (keyboards and vocals) and Morten Clason (sax, flute, guitars, vocals, and keyboards).

Good day, and a sincere thank you for taking the time to answer these questions of mine. By means of introducing the band, could you briefly tell us a bit about The Windmill and when and where it was founded and perhaps a few other interesting tidbits that you feel like throwing in there?

J: Hi there. The Windmill was initially quite loosely founded as a side project to other bands that the members were playing in back in 2001 or thereabout. I had a revelation back in the late nineties when driving through Germany with the family sound asleep in the car and Camel’s Moonmadness album on the stereo. We came to the top of this road and a huge windmill-park showed up in front of us. All the huge blades circled in different speeds, but somehow, they all circled in a beat that fitted the music. Then and there I promised myself to one day create a “prog rock” band and call it Windmill. Some years passed by before I met all these wonderful people who managed to help me make my dream become reality, but it took more years to reach the realization that this could actually go somewhere. We started to record some demos and the people listening to them said “You need to record this material properly and release an album”. Okay, so that is what we did, and many years later we are here with our third album.

Do you recall what the first record you ever bought was and where you got your hands on it?

J: For myself I think that might have been an album by Dutch group Shocking Blue, which contained songs like ‘Venus’, ‘Never Marry a Railroad Man’ etc., and I bought it in a record shop in Oslo. I might have been around nine or ten years old at the time, so that would probably have been back sometime in 1969-1970.

M: My first three vinyls were A Day at the Races by Queen, Even in the Quietest Moments by Supertramp, and Leftoverture by Kansas. I bought them at Rilla Platebar, Hamar in 1978

Were there any musical events in your formative years that influenced some of your choices and decisions later in life with respect to becoming a musician yourself? Anything or anyone in particular that has had a long-lasting effect on your own approach to writing songs?

J: There are several influences, but I guess it was an unconscious decision because for as long as I can remember, I have been determined to play music in a band; I can remember that from the age of five. At first, I was very fascinated by the trumpet and started with that around the age of eight or nine, but my main interest changed to the organ sometime around the age of ten. I was lucky to have a mother who believed in me and who therefore bought me an organ (a quite expensive one at the time), and she also bought a drum set for our drummer and a bass guitar. I had already sort of started a band together with my best friend at the time and told everyone what they should play. They all agreed, so that was it. After a while at the age of eleven or twelve, I heard Deep Purple with Jon Lord, and I was lost. Later, I started to listen to Genesis, Pink Floyd and bands who fell into that category. They all had fantastic keyboard arrangements, so of course I have been influenced by them.

M: I must mention Camel, Jethro Tull and Focus. All these acts inspired me to bring the flute into the bands I have played in… and of course The Windmill.

By the time Tribus came out in 2018, it had been five years since the release of its predecessor, namely The Continuation. I can imagine that composing and arranging such richly textured, epic, and wonderfully atmospheric tunes as yours can be quite the elaborate and time-consuming process. How do you go about writing songs for The Windmill? Do you meet up maybe once or twice a month and run through various ideas or do you live far apart from each other and send riffs and melodies and whatnot back and forth between you via e-mail and so on?

J: As we all live quite close to each other, we normally meet up once a week for rehearsals, and maybe one of us has an idea or maybe someone has written an entire song with riffs and lyrics and just needs to get it properly arranged by the rest of the group. Maybe someone else has a piece that would fit in somewhere or another approach to things, and we will try that out to see if it fits or not. In the end it normally takes shape automatically as all the band members contribute with their ideas. 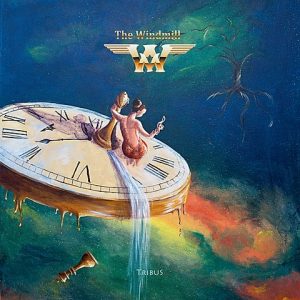 What is the idea behind the title Tribus? I also have to say that visually speaking, the packaging and (surrealist) artwork that graces the record is stunning and truly pleasing to the eye. Everything seems to be connected on so many levels. Fantastic!

J: Thank you very much, we are thrilled to hear that you like it. The title Tribus can have lots of different meanings. For example, “tribus” includes one or more closely related groups of organisms, and in a way, it is akin to a cold tribe, industry, and branch, which is an optional category used in the biological system. It made sense to call it Tribus because of the way we think as a band, i.e. a related group of organisms. Not just one tree, but all the branches (members) are active. For the cover art itself, we are very lucky to have Kirsten (my wife, actually) who do paintings and drawings as an all-consuming hobby. She got the track titles one by one as we proceeded with our work and then made paintings one by one based on those titles.

The music and lyrics that constitute Tribus unfold like an inner journey and it is undoubtedly a beautiful musical odyssey to embark on, but does that particular journey somehow reflect or mirror any real-life experiences of yours or perhaps certain happenings or people that you have encountered at one point in time? In short, what inspires the music and lyrics of The Windmill?

J: Ha-ha, no, it’s actually not that deep. We have basically just tried to describe the lifecycle of a tree from a seed until its death, and that of course can be transformed to human life as well. It’s up to the listener to interpret it in their own way. I think our inspiration with respect to both the music and lyrics is life itself. It is as pure and simple as that.

How prominent does the material from Tribus feature in your set list? Have you toyed with the idea of performing the stunning LP in its entirety?

J: We have already played the album in its entirety at several occasions and the material performs great live. We take pride in not overdoing recordings so that we can always manage to perform the music live without having to get outside help. Having said that, it’s also fun to alter the songs a little when playing them live so as not to be suspected of using backing tracks.

The Windmill have appeared at festivals such as Close to the Rain in Bergen, Norway, and Summer’s End in the UK. Were those good experiences for you?

J: They were both very good indeed, but honestly, the greatest gig we did last summer was the honorable Night of the Prog Festival in Loreley, Germany. That was a long-time dream finally coming true and what a blast that was.

Do any of you guys play in other bands as well and is it ever difficult to juggle two or more bands?

J: Our guitarist Stig and drummer Kristoffer play in their own band called Infringement as well. You should check them out as they are really quite good. So far, we have not really experienced any problems when it comes to juggling between these. Some of the guys are also busy with some projects involving Clive Nolan from Arena and Pendragon among others and his musicals. So, I guess we can say that we all are involved in other projects, but The Windmill will always be a priority for most of us.

What is next for your guys? Is there a new studio album on the way?

J: We are working on a new release for the time being, but no dates nor times are set yet. As we are writing this, the corona virus has more or less shut the whole world down, so we are in a state of hibernation too, but we’ll hopefully wake up soon.

What is your favorite Saturday night record? And what about a Sunday morning record? Any preferences?

M: I still love to play Supertramp, Kansas, Journey, Foreigner, Saga, Yes, Camel, Genesis, Eloy, The Night Flight Orchestra, Asia, Ian Hunter, Deep Purple, Ayreon, Toto, Omega, Pendragon, Arena and Clive Nolan’s musicals on a Saturday night, and if I don’t play them all on Saturday night, I continue with the rest of them on Sunday morning.

Just out of curiosity, what is your most essential backstage rider requirement? And what is the least glamorous place or location you have ever found yourself in while on the road? 🙂

J: The first one must be enough bottles of water and hopefully some decent food too. Apart from that, we are not that fussy about things. We had a couple of strange situations some years ago where we ended up playing at this private party and had to rig the stash onto a small balcony. There was no room for the drummer, so he sat behind us in the living room of this small house. The public were out on the lawn in front of the balcony. That was quite weird, but also great fun. Just a week later we found ourselves outdoors on a sloping lawn gigging at a big outdoor art exhibition. Thankfully, the weather was great. And of course, we’ve had our fair share of tiny stages with almost no room to even fit our stage gear on. But we have always managed to do our shows.

Thanks once again for your time.