Deliberations From The Shire with Mike James – B.O.S.C.H 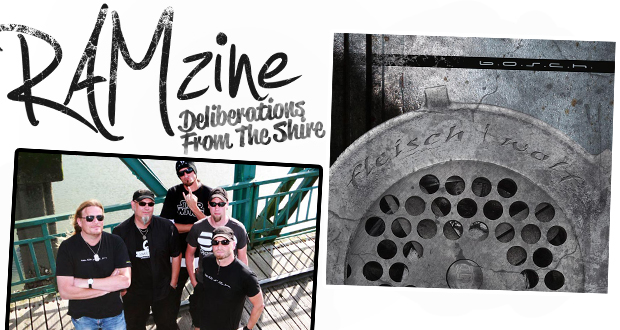 On first listening to the new album by B.O.S.C.H it’s hard not to draw comparison to the fellow German pyro loving stadium-filling counterparts but as you delve deeper into the album it’s clear that Fleishwolf is at the forefront of the new wave of German noise “NDH” as they call it in the motherland (Neue Deutsche Harte).

This album is a bubbling melting pot of Industrial, Metal, Hardcore, Prog, Thrash with a giant slice of Punk attitude.

Lead singer Max Klee spits venom into the mic like a rabid John Lydon or Keith Flint from The Prodigy with undertones of some of your favourite Nu-Metal icons. The combination of dramatic pounding rhythms coupled with the programming which echoes everything from Fear Factory to NIN shows that this colossal 3rd release by B.O.S.C.H is going to see them push this growing scene to new highs with them leading the way.

Having had this on repeat for days I can say that it’s totally infectious be that early in the morning or having it blasting out of an evening to wipe away a hard day. The standout tracks for me on this album are ‘Schock’ (which is the first single taken from Fleishwolf), ‘Evolution’ and watch out for ‘Das Spiel’ to hit home hard.