Deliberations From The Shire with Mike James – Booze & Glory 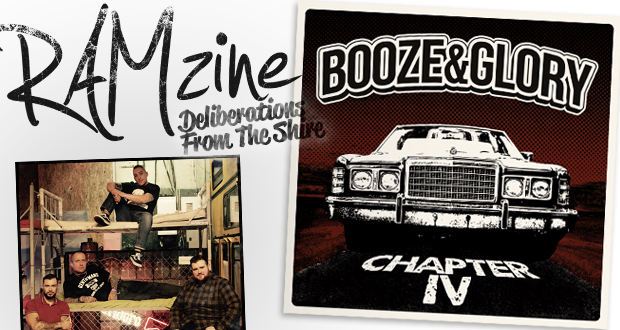 Booze & Glory are back with the next instalment of the party fuelled sounds of rowdy old skool punk and Oi anthems. Having been making music since 2009 Chapter IV see’s the London boys upping their game with the infectious way they write songs for Friday & Saturday nights whilst writing about subjects as diverse as installing positive thinking in people, seizing the day & making the most of what life throws you today as tomorrow might not happen. This is even more prevalent knowing that lead singer Mark has recently been battling cancer.

If your into the sounds of bands like Dropkick Murphy’s or Rancid then Booze & Glory’s punk rock, loud and big-hearted sounds will not leave you disappointed. There’s the more folk-infused opener to the album which see’s the band really growing in their writing as they try to reach out to a bigger audience, but are still just as at home writing and playing short little ditty’s – that any fan of the band will feel is them being true to themselves. The band have a fire and fury in them that will see them taking 2017 by storm. Booze & Glory already have 150 show’s booked this year including a full month of shows in America and festival appearances across Europe to support the release of this next chapter.

Stand out tracks on this album for me are: ‘The Time Is Now’ with its big hooks and massive sing-a-long chorus, then the fast-paced ‘Life Is A Gamble’ which see’s the music attacking the ears with blistering thunder and ‘Carry On’ which has the feel of early Green Day with just as much commercial appeal that given the right opportunity could see big air plays for the band; along with ‘Blood From A Stone’ that could easily be a weekend drinking anthem it even has guest female vocals for that mass involvement.