Review: Davey Suicide – Made From Fire 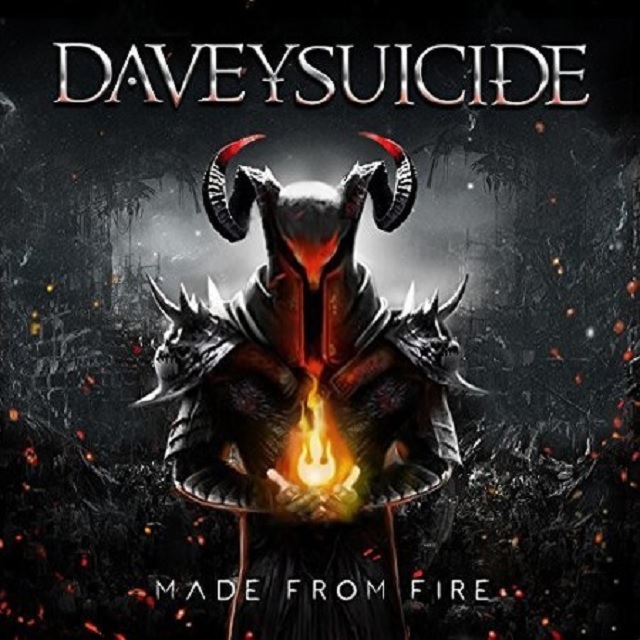 Over the past year or so Davey Suicide himself has been battling with his ex-record label over many issues, so it’s a huge achievement this album was finished and released successfully. Davey is a living example that persistence pays off. Davey and the band know the fans want more music – Davey and the boys don’t fail to deliver. Even the title ‘Made From Fire’ is a reference of the ordeal they have been through to get this record released.

‘Made From Fire’ starts off cinematically with the aptly title intro ‘Resurrection’ which brings us to lead single ‘Rise Above’. A high-energy anthem about overcoming the odds whether it be a struggle in your career, personal issues, or problems with others. A great start to the record, setting up what we can expect through the next 13 tracks.

The party doesn’t stop as the following tracks ‘Dancing With The Reaper’ and ‘No Angel’ blend in really nicely, and unlike some rock albums in 2o17 – it doesn’t get boring. While we are on the subject: Is Davey Suicide rock? Is he metal? Does it matter? If this was 2000, they would be lumped in the ‘nu metal’ genre, if it was 2006 they would be ’emo’. Now its 2017 and there’s more genres than albums released – who cares. If you like them, you like them. Heavily inspired by Marilyn Manson, Rob Zombie and a splash of Motley Crue, Davey has a certain audience-  who will LOVE this LP.

Collaboration with juggalo rap crew Twiztid  on ‘Too Many Freaks’ prove that genres are blurred and should be experimented with.  This track even has a bit of a Wednesday 13/Murderdolls vibe that has been a great miss in the rock scene as of late. Another stand out track is the collaboration with ex-Aiden frontman and solo artist William Control, entitled ‘Paralyzed’. Just likeDavey -William is really doing his own thing, despite views on their style of music. However they manage to combine their styles to create what sounds like a future single.

That is possibly why Davey’s fans are so loyal, and indeed, why this album works so well: He is doing his own thing, what he wants to do. This is also evident in tracks like ‘The Chemical In You’ and title track. I feel Davey is on to something here and hope people pick up on this as it may be a career defining record. Davey speaks to a subculture that is either growing up or just about to happen. Right place, right time? We will see. Ahead of it’s time…again we will see. At the end of the day ‘Made From Fire’ proves that you don’t need a record label to make a great album which speaks to your fans, and collect a few more along the way.