Sari Schorr is A Force OF Nature – It’s implied in the title of her debut album, released on Manhaton Records. Play it or go one better and catch Sari Schorr & The Engine Room live and it becomes a reality. Not only has the lady got one hell of a voice, but you’ll find she has something to say in the songs she sings. Liking not only what was heard but what she had to say, the opportunity to have her say more was too good to let slip by. But enough already, there’s an interview waiting to be read…

Ramzine: You trained as an opera singer. How did that turn around to you singing the blues for a living? Do you see similarities between the two styles, musically or in themes, after all both are said to be partially influenced by old European folk songs?

Sari Schorr: I trained as an opera singer to master my technique. I always loved the blues. Interestingly, although blues and opera are heavily varied in styles, there is a similarity between the genres. The common thread is that both can serve up a healthy dose of angst and despair, but they deliver their messages in very different ways.

Ramzine: How did your professional career begin and are there any particular highs or lows you’d care to share?

Sari: It all started in Queens, in a small New York City apartment, where I grew up with my three siblings. My sister and I would put on shows in the living room, using the couch as a stage. Neighbours from the block would graciously attend, feigning enthusiasm.

The worst gig was the one we barely made it out of alive. The venue was called the Tiki Lounge in NY.  It was a dimly lit, smoky bar with tacky red velvet wallpaper. It was a favourite watering hole for thugs and gangsters. My cousins were there to hear my band for the first time. It was in the middle of our second song when the fight broke out. Chairs, glasses, and bottles became airborne. A free-for-all in the shape of a human snowball was growing ever larger as it bore down on the stage. A single gunshot rang out and the bullet lodged itself in the ceiling. The only escape was through the kitchen where a fire was ablaze. We made it out with my stunned cousins, but without our gear. Years later my cousins still teased me about the night I brought the house down. 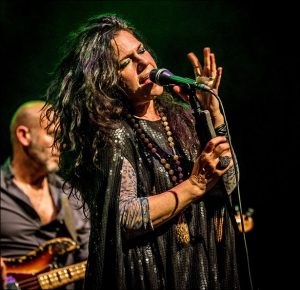 Ramzine: You sang with the likes of Joe Louis Walker and Popa Chubby, touring both across the USA and mainland Europe. What were the decisions that lead you to want to go solo?

Sari: Popa and Joe were always encouraging me to front my own band, but I really enjoyed being in a support role. I just wasn’t ready. I don’t think I had the confidence yet.

Ramzine: But you did eventually. The story is you walked up to veteran producer Mike Vernon and asked him to work on your debut album, A Force Of Nature. That must have taken a lot of hutzpah.

Sari: Mike was receiving a Lifetime Achievement Award from the Blues Foundation in Memphis. In his acceptance speech, he announced that he had retired from the music business and was living in Spain. Afterwards, I just wanted to tell him how much I loved his work and how the records he made with Fleetwood Mac, John Mayall, Freddie King and David Bowie had influenced me. I never even told him I was a singer. Then later that night I was asked to sing at the Daisy Theatre and word about my performance spread to Mike.

Ramzine: With you based in New York, between touring and song writing, then recordings taking place in both Spain and the UK, was there a long gestation period as the album came together due to its completion?

Sari: Because of those logistical issues, we had more time between sessions than we would have preferred. But, it turned out to be an advantage. The breaks afforded us a different perspective and better clarity. We could listen back to the recordings with an objective ear and refine our work as the album continued to develop.

Ramzine: A number of Spanish musicians appear as the core band on A Force Of Nature. That Mediterranean flavour does shine through. I presume they were Vernon’s choices, if so what were his intentions there, to impose a less traditionally macho blues rock bedrock to proceedings perhaps?

Sari: As I mentioned, Mike lives in Spain and had produced an album for a great Spanish blues band called Q & the Moonstones. Their album was recorded at Sputnik Recording Studio in Seville. Mike loves the studio and suggested that we record a few new songs there to see if I liked it. Well, I loved it and thought it would be the perfect studio to get the basic tracks recorded. With Mike’s clout, we were able to put together an incredible band. After the Sputnik sessions, we went to England to record Innes Sibun, Olie Brown, John Baggott, and Rietta Austin. Walter Trout’s sessions were recorded in the States.

Ramzine: One of the things I was suitably impressed about by the album was that there were several tracks that we might actually demean by calling worthy songs, falling into a political, social and personal nature; although they never overrode the quality or overall mood of the songs themselves.  Such humanitarian concerns are obviously important to you. Is music still a valid place to protest and question what’s going on in the world?

Sari: Great question! I think songs provide an important vehicle to deliver socially and morally relevant content. Ideas become more accessible through music because a song’s message resonates in the heart and mind of the listener.

Ramzine: The blues is often typified as a musical form concerned with tragedy and yet there’s also great joy and humour to be found in it. Listening to some of your lyrics there appear to be quite a few double entendres, not something Americans are usually noted for. Am I correct in my thinking?

Sari: You are indeed. I enjoy playing with double entendres. It gives a lyric more depth, and it’s amusing to catch something not heard before. Traditional blues artists often used humour to provide an outlet for their suffering. Many songs also used innuendo, slang, or double entendres, to cleverly conceal the true meanings of songs to tell their stories. A common example was the use of the word “woman” to replace “white boss.”

Ramzine: Your backing band, The Engine Room, how did you gather the different members together and how does performing live differ from working with musicians in the studio?

Sari: My band, The Engine Room, propels the live shows to something extraordinary. Innes Sibun decided to step into the project after a fantastic week in the studio recording the album. The great drummer Kevin O’Rouke was Innes’ first choice to fill the drum chair. Innes and Kevin had worked together in Innes’ solo project. Kevin Jefferies was highly recommended by our agent, and after the first rehearsal, we were convinced he was a perfect fit for the band. Anders Olinder had also worked with Innes and was our top choice for keyboards because of his soul and R&B stylings that give the band an added dimension.

Ramzine: There’s a mixture of blues, rock and soul in your music. Do you find audiences respond differently in individual countries and do you adjust your live set accordingly?

Sari: I think the most important thing for any band is to be authentic and consistent. Establish an identity and your audience will find you and become loyal fans. It is amazing how similar our audiences are from country to country. Languages and cultures change, but the human spirit that connects with our music is always familiar.

Ramzine: You’re out on a UK tour. For those who have caught you live before will there be any changes this time round, or rather what can audiences look forward to in general?

There are always changes because the show is very dynamic. We are a very spontaneous band and push the limits of what we’re doing every night. It requires a lot of trust and communication on stage. It works because we have an amazing synergy. It keeps the shows more exciting for us and the audience.

Ramzine: Finally, what next for Sari Schorr and The Engine Room?

Sari: We’ve started writing for the second album to have plenty of time to hopefully get it right. Most of all, we’re looking forward to touring all over the world. It’s a great honour and a real privilege to share the music we love with like-minded people.