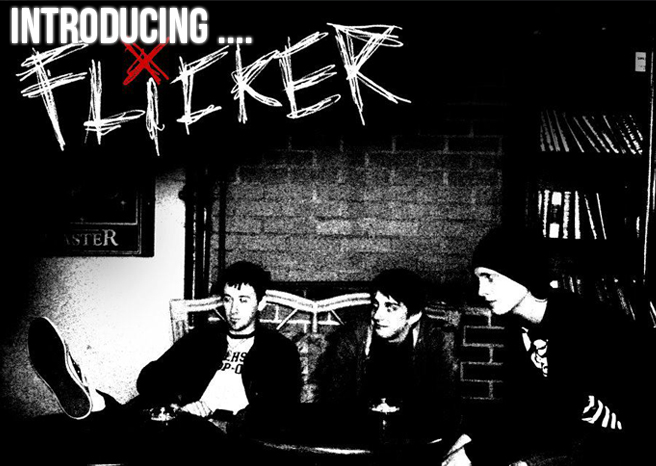 If you’re missing a bit of punk-rock energy in your life, Brit trio FLiCKER are here to save you! Setting the music scene alight in their home city of Norwich and beyond, their punchy guitars and infectious melodies are old school punk with a modern twist. The band demonstrate a clear love for, and strong understanding of, the genre; but make no mistake, they are not afraid to shake things up a bit.

Founded by lead vocalist/guitarist Rayna Vandél around 2008/9, the band have had numerous line-up changes and experimentations, and eventually became the current trio made up of Vandél, drummer Jack Carter and bassist Jack Player. In November of last year, FLiCKER released their brilliant debut album, ‘Tag-Team Fermentation’, available on their Bandcamp site as a free download here.

In what little of this year we’ve had alone, the band has already toured around the country as part of their ‘We’re Saving for a HelicopTOUR’ tour and appeared as punk-rock heroes Alkaline Trio in Norwich’s ‘Punk Rock Stars In Their Eyes’ gig. Coming up, there are plans for a new record as well as a split EP with an as-yet-unannounced band and continuing to make waves with their energetic, passionate live performances. A trio that clearly love making music and performing, check them out now and say you did it first!