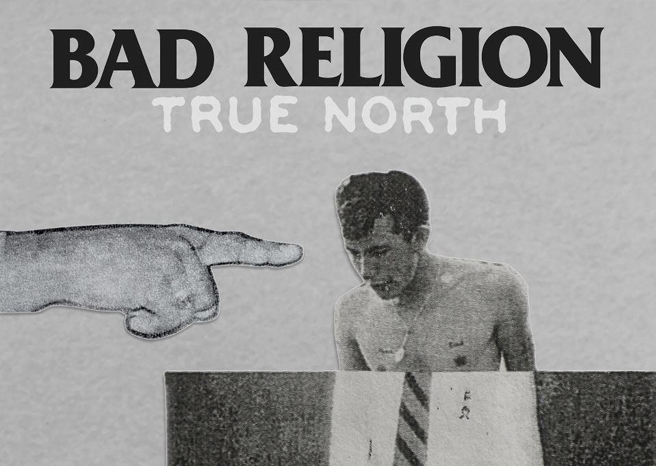 The never ageing groundbreaking lot from Los Angeles return with wait for it… their sixteenth album. After 2010’s patchy ‘Dissent Of Man’ it did seem Bad Religion had run out of steam, would ‘True North’ be a welcome return to form? Perhaps even return them to the outskirts of commercial success like ‘Stranger Than Fiction’ did way back in 1994, though not too far for punks sake.
The album opens with a study in melody whilst still retaining that grit and machine gun fire drumming from Brooks Wackerman. The lyrics penned by the legend that is Greg Graffin are as angry as ever and the chorus swoops in and out, a cracking opening.
‘Past Is Dead’ starts in a sombre mood Graffin crooning through a gut level riff played out by any one of Brian Baker, Greg Hetson or long time partner in crime Brett Gurewitz before exploding into furious lead. Its a relentless muscular machine and even this early keeps the intensity up.
Clever lyrics were always Bad Religion’s bag and ‘Robin Hood In Reverse’ is a great example of that Graffin/Gurewitz teamwork as their bending of words along with the upbeat and crash filled drumming and head down playing make this song a standout.
We then crash into ‘Land Of Endless Greed’ there’s an interesting Bob Dylan speaking element of the verse as Graffin makes sure that he clashes well to really accentuate the three pronged attack of guitars and Jay Bentley’s always interesting bass lines.
‘Fuck You’ was one of the lead singles in true Bad Religion fashion and its a cracking one filled with enough rebellion to bring down a thousand governments, although it will probably end up sneered in classrooms by fools who’ve missed the point.
One of the three amigos open ‘Dharma And The Bomb’ in a great squealing riff before pulling back into a solid chug chug , this is where we see Bad Religions ability to make themselves just accessible enough with a pleasant if forgettable radio friendly tune.
‘Infected’ was Bad Religions biggest hit and ‘Hello Cruel World’ does remind me of that in its changeable beat and moody harmonies, its a belter on ‘True North.’
‘Vainty’ brings us back into hardcore with spitting lyrics all held together by a spikey high hat from Wackerman’s playing.
Next its ‘In Their Hearts Is Right’ and you have to love the element of cannon in the chorus here and it again represents a high mark and an exploding solo.
Biggest change in pace with ‘Crisis Time’ it starts with some excellent use of harmonics with the riff and its melds into their typical rhythm section. There’s no denying how effective this one is with its solemn melody and clear harmonies.
‘Dept Of False Hope’ sounds like an atypical bad Religion title with its angry fist pointed right at the heart of American government. It feels like it should be played in a march or used in a rally.
‘Popular Census’ does feel like it should be played live to get its full force otherwise it does feel less inspired than some of the cuts here.
The best part of ‘My Head Is Full Of Ghosts’ is the wordsmith element of Religion otherwise this again does seem a touch of filler this end of the album.
Just when you start to think that perhaps the Godfathers of hardcore have run of ideas and pace ‘The Island’ throws you back into your chair and pushes through with the energy of sixteen nuclear bombs.
We finish with a chest banging anthem in ‘Changing Tide,’ it is a great close to the album with Bad Religion finding another way to alter there trademarks ‘oohs’ and ‘ahhs’
‘Stranger Than Fiction’ has long been held up as Bad Religion’s high point but ‘True North’ is more consistent and certainly more inspired, it may not have natural singles that crack top twenty’s but that was never the point of this band, making music that challenges you and makes you take a look round was. They may never be compared to Bruce Springsteen as some American Idiots have to a certain band but to me that’s what keeps me listening.