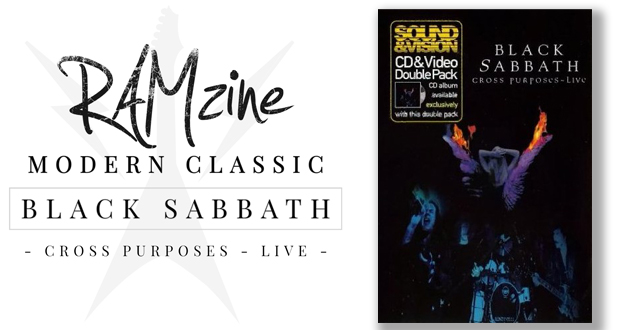 The pioneers and originators of heavy metal, Black Sabbath, capped off their majestic The End tour with a hometown show in Birmingham in early February 2017. Yours truly caught the performance at London’s O2 Arena just a few days before and it was a monumental event. Their long and storied career is undoubtedly a rather complex and convoluted one in the sense that many fine musicians passed through its ranks over the years and left their indelible work on their thunderous studio recordings and/or superb live shows. The purpose of this short essay of mine is not to highlight or discuss the captivating chronicle of Black Sabbath or their massive influence and continued relevance as such, but rather to throw a spotlight on a specific entry in their catalogue; something overlooked yet historically important.

Following the release of Black Sabbath’s exceptionally cool studio offering entitled Cross Purposes in January 1994, which was crafted by a stellar line-up consisting of Geezer Butler (bass), Tony Iommi (guitar), Tony Martin (vocals), Geoff Nicholls (keyboards), and former Rainbow drummer Bobby Rondinelli, the legendary heavy metal pioneers headed out in the world in support of this marvelous creation of theirs. Now, the European leg of the tour spawned something quite unique but sadly neglected; something that is akin to nothing but a faint memory these days. What exactly is yours truly referring to here? I am of course talking about the criminally underrated Cross Purposes – Live album and its video counterpart, which was caught on tape and filmed at the Hammersmith Apollo in London (the venue is commonly referred to and known as the Eventim Apollo today).

By the time Cross Purposes – Live was released as a CD/VHS tape in March (Europe)/April (US) 1995, the Cross Purposes line-up had already broken up and Black sabbath had resurrected the awe-inspiring Tyr line-up and were only a few months away from releasing the halfway enjoyable Forbidden record in June 1995. There was next to no promotion with respect to Cross Purposes – Live, which is downright unforgivable considering its brilliant and varied setlist. As Iommi stated in his autobiography entitled Iron Man,

The sadly missed Sabbath expert Garry Sharpe-Young does mention the live effort in his in-depth study of the group titled The Battle for Black Sabbath:

Most other books on Black Sabbath that I have come across over the years fail to mention Cross Purposes – Live at all and it appears to be not only overlooked but sadly also utterly forgotten. It was briefly mentioned in the fifth issue of Uncut’s Ultimate Guide Series from 2018 where it says that

While one could make the argument that Martin paled in comparison to his predecessors in Sabbath when it came to charisma and stage presence, his ability (and willingness) to cover all eras of Black Sabbath’s vast and varied canon of work made the tours that he fronted some of the most captivating ones to attend and to listen to in retrospect. There are many marvelous shows and concerts to be discovered on YouTube for those of you who are curious as to what this underrated singer brought to the table. Personally, I find the ones from the Headless Cross and Tyr tours from 1989-1990 the most memorable ones in terms of spinetingling musical brilliance.

Let us have a look at the setlist of Cross Purposes – Live for a minute, shall we? First of all, it was fabulous to see that the masterpiece that is Cross Purposes (unarguably one of the finest LPs to ever sport the Sabbath moniker) featured in the set list by means of the tracks ‘I Witness‘, ‘Psychophobia‘, and ‘Cross of Thorns‘. Headless Cross, Tyr, and Dehumanizer are all represented here in the shape of the Headless Cross title song, ‘Anno Mundi‘, and ‘Time Machine‘. Then there is the inclusion of ‘The Wizard’, which had not been aired live since the early 70s. The fast-paced rocker ‘Neon Knights’ from the majestic Heaven and Hell album and the raunchy Mob Rules title track from 1981 also appear, and it is always a treat to listen to ‘Children of the Grave‘ and ‘Into the Void‘ from 1971’s Master of Reality in a live setting. Are there other truly surprising entries other than ‘The Wizard’ then? Well, you could say that ‘Symptom of the Universe’ stands out in the sense that only snippets of it were played on the Seventh Star tour (as part of a medley) in 1986 prior to being resurrected for the Cross Purposes tour in 1994. Before that it had not been played in full since the Never Say Die! tour of 1978 to the best of my knowledge. Did you notice that at this point in time the band tried to retire ‘War Pigs’ and ‘Heaven and Hell’? Why is that important? Well, ‘War Pigs’ and ‘Heaven and Hell’ are glorious metal anthems and classics in their own right, but regardless of what we may think of them they have been played to death ever since 1970 and 1980 respectively. The Cross Purposes tour was one of those times where they did something adventurous and removed classics and staples from the set list in favor of either lesser known or more obscure cuts.

Iommi looks and sounds dangerously cool throughout as he churns out riffs capable of moving mountains while the hard-hitting rhythm section consisting of Rondinelli and Butler is phenomenal and locked into a rock-solid groove. According to Joe Siegler’s excellent black-sabbath.com website, Tony Martin was sick for much of the 1994 tour and was therefore not firing on all cylinders (which was also touched on by Garry Sharpe-Young in the aforementioned quote by him), but to these ears his delivery here suits the raw and powerful sound of the entire metal ensemble nicely and he add emotional weight and depth to the tunes. Although not seen on stage, Nicholls is clearly audible in the mix and provides interesting layers and textures to the material. The production is nice and crunchy while the video editing is good and takes you close to the action on stage. More importantly, there is heaps of atmosphere to the proceedings.

Many fans and listeners probably consider Cross Purposes – Live to be a bit of an odd entry in Sabbath’s wider discography, but again, it is a most worthwhile and fascinating output both musically and historically. As stated before, it was only the second official live document by the band (1982’s Live Evil was the first and 1980’s inferior Live at Last was and is largely considered unofficial by the members of the band) and it captured the fleeting genius of a line-up that could have done wonderful things had they only stayed together for more records and tours. Perhaps this particular offering is an anomaly after all as Sharpe-Young states? There is neither commercial nor critical success to speak of here because the cursed thing was never promoted properly, and many did not even know that it existed (and I would wager that many are probably still unaware of its existence to this very day). I do recall traveling to Gothenburg in Sweden back in 2002 in order to find either the CD or VHS tape (or preferably the whole package intact) as there were a lot of great record stores in that city back then, but my search was fruitless and I returned emptyhanded…well, that is not entirely true as I bought a remastered copy of Venom’s vicious and groundbreaking Welcome to Hell that day, but that is beside the point, and as usual, I digress.

Cross Purposes – Live was released by the now-defunct IRS Records and as with Headless Cross, Tyr, Cross Purposes, and Forbidden, it is out of print and not available on any of those awful streaming services and digital music retailers out there on the treacherous web. A couple of incomplete DVD versions of it eventually saw the light of day years later, but these are considered unofficial and unauthorized. Yours truly is in possession of one of these and although it is far from perfect, it still feels like it is better than having nothing at all, but it should come as no surprise that you can easily find the footage on YouTube should you so desire. It is not merely a curiosity or a cool souvenir for those of you who were there that night in London in 1994; it is a testament to the power and glory of Sabbath’s timeless tunes as well as Iommi’s deeply inspiring will to persevere and keep a great band alive and on the road through ups, downs, line-up changes, and musical trends. Sabbath always made records that mattered and Cross Purposes – Live is no different. Now, what we really need is a 2CD + DVD/Blu Ray release containing remastered versions of the Cross Purposes studio album and the aforementioned live record coupled with crisp and pristine video footage. That would truly be something magical and hopefully help emphasize and highlight the fact that Cross Purposes was an outstanding record and that the resulting tour had a sense of excitement and unpredictability to it. This era of Black Sabbath deserves much more praise and admiration.

Please note that the VHS contains more songs than the CD and that the latter omits tracks 4, 6, and 8.

The facts and specifics:

Cross Purposes – Live was filmed at London’s Hammersmith Apollo and released by IRS Records on March 13, 1995 in Europe, and April 4, 1995 in the US.