Ramblin’ Man Fair is poking its head over the horizon and with now less than 6 weeks to go, we are taking a look at 12 bands worth your time, from the big names down to the small surprises, let us try and steer you into something that we ourselves will be trying to find our way to see.

Austin Gold: Kicking off the list is a band I’ve had the luxury of witnessing more times than I can count. Having seen them grow a huge following on the pub circuit in my home town, they are regularly visiting my local and literally making the boat rock each and every time with the masses that come along to hear them. Their rock blues, led by the enthusiastic David Smith, is the perfect way to ease that hangover most of us will struggle with on Sunday morning as they open the main stage. With any luck you may even hear something new from the 2nd album due for release the same month! Don’t miss it!

King Creature: After something a little heavier for that hangover cure? King Creature might not be it, they are heavier and kick off the Grooverider stage on the Sunday, but these guys will have you heading to the nearest bar for a pint more than the paracetamol to ease your pain! For fans of Black Label Society, Pantera, Motorhead etc.

Vola: Hitting the Prog stage early on the Saturday, Vola are completely worth seeking out. Their heavy nuanced prog rock/metal is guaranteed to get your head bobbing trying to find the tempo, having witnessed this first hand last year at Bloodstock festival, they were easily one of my most favourite discoveries of the year.

The Fallen State: One of the hidden gems of the festival is the Rising stage, and at RAMzine we love to celebrate the up and coming, having not long ago released their new album A Deadset Endeavour, they’ll be firing on all cylinders and rocking as hard as anyone on the main stage.

Bad Touch: For those that are questioning the idea of upgrading to VIP tickets and if the bonus of a sheltered bar and view of the main stage is worthwhile, then look no further than the entertainment happening right under that exact roof. No stranger to the Ramblin’ Man crowd, Bad Touch rocked the Rising stage back at Ramblin’ Man Fair 2017 and proved a hit. Their return to the fields of Maidstone will be nothing short of fantastic.

The Darkness: Headlining the opening Friday night, what list would be complete without the Darkness?! Picked out by RAMzine’s Neale, and we cannot blame him, having gone into the darkness of alcohol and drugs, they returned triumphantly and although line up changes may have happened, the core sound and rock and roll attitude remains at the heart of their live show. Flamboyant, over the top, extravagant, the Darkness have it all and let it all out on the stage. Rock and Roll at its finest.

Ugly Kid Joe: A bit like Reef back in 2017, some may be mistaken for them being known as a one/two hit wonder and not worthy of their slot on the main stage on the Saturday. Much like those that thought that with Reef, they are completely wrong! In recent years they have co-headlined a tour with Skid Row, been the main support for Guns and Roses, and even Alice Cooper, successfully funded their first studio album in 19 years ‘Uglier Than They Used to Be’ and carried on strong ever since!

Anathema: These should be absolutely no stranger to anyone hitting up the prog stage on the Saturday, headliners Anathema are going to close the stage in true style. If their performance on the main arena stage of Stone Free Festival is anything to go by, they come wind, rain or shine, nothing will dull the music you will get lost in. Much like their last studio album title ‘The Optimist’, we completely expect to see a huge crowd of happy, optimistic faces giving their time to the Liverpudlians.

Riverside: Another pick from one of our esteemed writers, These unlikely lads from Poland have been touring their 2018 release ‘Wasteland’, their first full release as a three piece after the tragic loss of guitarist and co-founder Piotr Grundziński who sadly passed before the release of their 2016 album ‘Eye of the Soundscape’. Their show will bring a performance that will be unrivaled on an emotionally charged level.

Richie Kotzen: When it comes to uniqueness at the festival, Richie Kotzen is head and shoulders above the rest, and sitting on the blues stage, he should have plenty of headroom to play. From the voice, song writing, guitar playing, even down to his relaxed swagger on stage, it all seems so effortless to him. If you know him from his time in Poison, Mr. Big, The Winery Dogs, it is hard to workout just how he can find the time to create and be sitting with a back catalogue of only a mediocre 18 solo albums, Richie is the epitome of rockstar!

Airbourne: You can’t mention the name Ramblin Man Fair and not have someone mention Airbourne, their set in 2016 has became folklore history and naturally, when Ramblin Man Fair themselves consider the top 10 sets of the festival ever, that list is never complete without it. Loud, dirty rock and roll, you can expect everything and more from the men of down under.

Inglorious: While looking back at 2016, it’s worth mentioning those guys that opened the main stage on the Saturday back then. With a change in line up that saw most of the band leave in 2018, they return to Maidstone as strong as ever, we caught them in Nottingham earlier this year and cannot put into words just how good their show, and the talent in the current line up is (lead guitarist Danny Dela Cruz at only 19 is impossibly good!) and we can only hope they have time for their man behind the kit (and greatest name on the bill Phil Beaver) to come and share his acoustic guitar skills with the band.

Orange Goblin: For those that know me, these were never going to miss the list. One of the greatest bands period! If you are wanting to rock hard, drink beer and spend time getting your ears blown off with what will most likely be a crowd full of beards (even some of the women no doubt!), this is your ticket! One of the few bands that could give Airbourne a run for their money, it should go without saying this lads will go down superbly… and quite possibly be the band that gets more beer drunk than any other.

To finish of our choice for our “bakers dozen”, well it’s just impossible, so we are going to cheat! The line up is just that good! What we would like to say though is you would be fools to miss Black Stone Cherry, The Temperance Movement, Crobot, Monster Magnet and The Wildhearts to name just a few, but if you know your worth, then we are pretty sure you already have that covered! 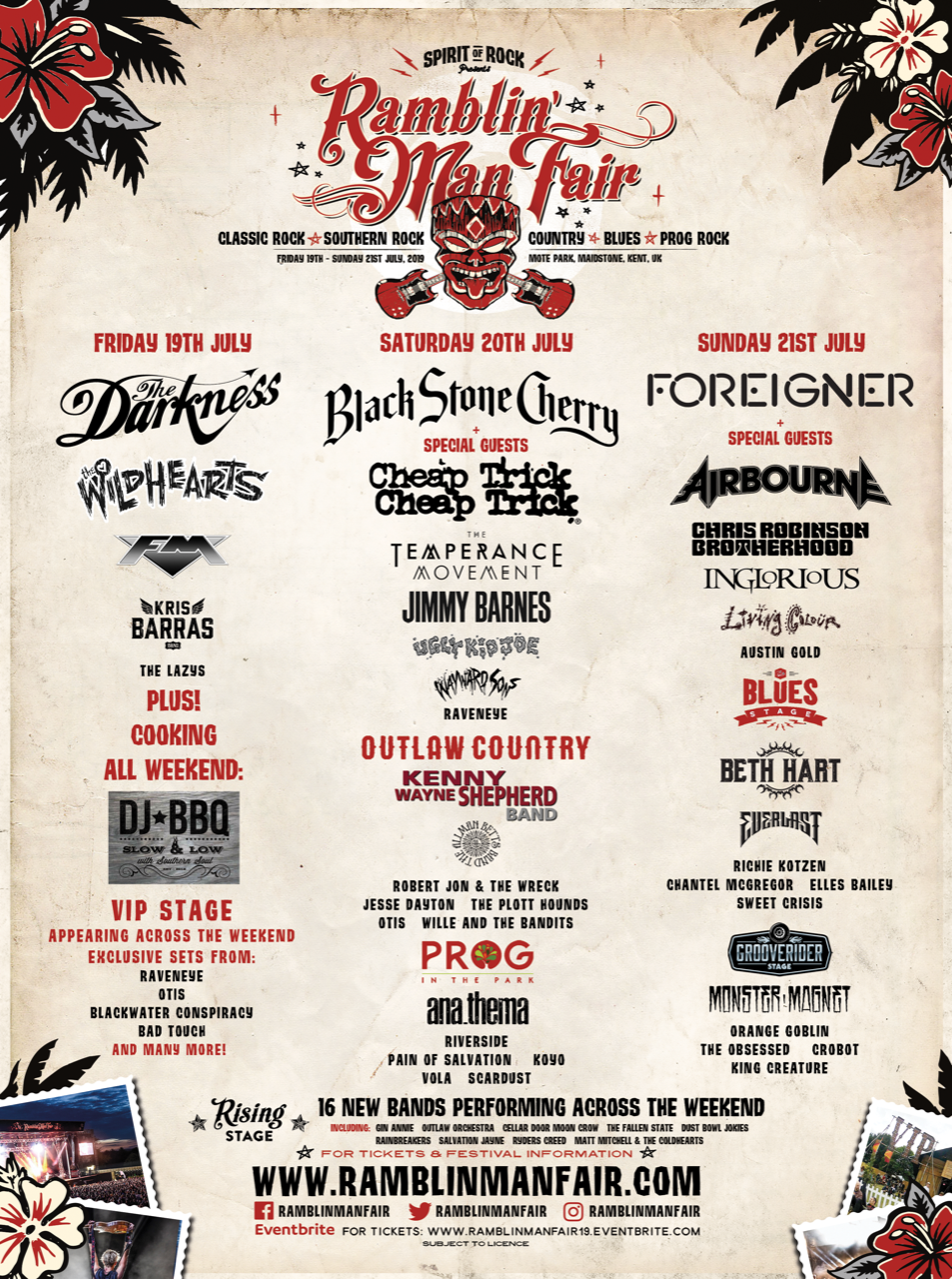