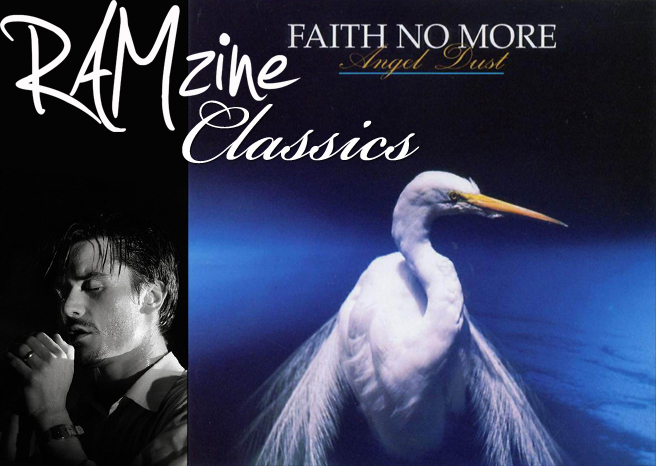 1989 saw a lot of changes for Faith No More: they had hired a bundle of energy with a high voice in Mike Patton and ‘The Real Thing’ marked a massive surge forward in quality. Their previous two albums only showed glimpses of what might happen if they could harness that creativity. By 1990 the album had hit big time both sides of the pond and even spawned a hit single in ‘Epic.’
But that meant the follow up had to be good to continue that momentum and would it contain the same guitar driven instantly accessible blueprint? 1992’s Angel Dust was not instantly accessible. From the artwork of a beautiful swan on the outside to meat hooks on the inside it sounded more like a schizophrenic on speed. On fourteen tracks, Faith No More managed to cram idea on idea, surging from pop to rap to classical to thrash to goth.

The album opens with Land Of Sunshine a song that lyrically is based on Patton looking through fortune cookies…no really. But don’t let that fool you, this has some great work from keyboardist Roddy Bottum using a type of circus sample throughout. It is organised chaos of the greatsest degree.

Caffienne (an ode to Pattons only drug) comes charging out with ‘Big’ Jim Martin chugging through an excellent riff melding with Mike Bordin’s rapid fire drum beats. Patton’s vocals are growling through the verses before showing a wonderful baritone in the bridge and chorus. It’s complicated and epically executed.

We change tack again, as one of the lead singles, Midlife Crisis, opens with Bordin’s drums sounding like gunshots, giving way to haunting synth from Bottum and a funky bass line courtesy of Billy Gould. The chorus is soaring and punctuated from the melodic playing of Martin – this really is one of the peaks of the album.

RV is one of the many oddities on ‘Angel Dust’ – perhaps Edge Of The World hinted at Faith…’s eccentricities on the previous album but honestly, a redneck ballad? Its fantastically sung by Patton and crashes into a beautifully chorus and actually ends up working wonderfully, pretty much solely down to the passionate vocals.

Before you know it, you’re challenged again by Smaller And Smaller, with its driving piano and synth from Bottum. You can really hear how excellent and inventive a drummer Bordin is in his fractured beat. It’s a hard growling song, containing Patton’s incredible screech that before you would only hear deployed in his other band, Mr Bungle.

One of my favourites is the brilliant Everything’s Ruined. Martin’s guitar is meaty and cuts through the excellent piano riff. The song is almost a follow on from Zombie Eaters, where Patton explores the frets of fatherhood.

Malpractice has to be Martin’s baby, as it is driven by his impossibly dirty riff, but even here rather than being a straight forward metal we get elements of strings making it more in keeping with perhaps death metal.
Kindergarten is possibly the most accessible song on the album, and that is down to it following a more structured frame: we have a grinding riff and some great hi-hat action pushing towards a anthemic chorus.

If you thought that the previous song meant that they had run out of ideas, Be Aggressive says otherwise. It features… a cheerleading section. You heard. It is fantastically catchy and flows into a cracking guitar solo from Martin.
Next is the incredibly changeable A Small Victory, featuring a wonderfully melodic riff that seems to add to the beginning of the song’s creamy sound, the second half then descends into an excellent vocal performance from Patton.

The wah-wah sound of Martin’s guitar, with the haunting siren and automated voice, hints that Crack Hitler is going to be something different again – and it is. It’s got a toe-tapping slap bass line from Gould, and sports a great crooning performance from Patton, along with his rapping. But listen the whole way through and tell me you’re expecting the chanting breakdown!
Jizzlober is akin to Malpractise, with an even dirtier and harder riff from Martin. It sounds like a nightmare come alive, and the combination of the grind and the incessant, almost psycho, riff from Bottum is very effective. Patton’s vocal stylings are utterly brilliant here, veering from angry to full screech in a wonderfully sublime mess.

And just when you thought it couldn’t get more eclectic, we have an instrumental. Midnight Cowboy is actually one of my favourite instrumentals ever and if you wanted to hear a accordion in metal here’s your chance. A very moving piece of music, and Martins soloing is majestic in parts.
How do you finish this bizarre collection? A Commodores cover that’s what! Easy closes the album, and was a surprise hit here back in 1992, honestly it’s easy to see why. The cover adds to the original and really showcases Martin’s dexterity on his Flying V and Patton’s vocals are pitch perfect, bloody show off.

Faith No More are mentioned by so many modern artists as an influence, and Angel Dust showcases all of them brilliantly. In terms of longevity this is one of the greatest albums ever recorded; it is impossible to forget because of the different styles, songs that you like when you first hear it will give way to other songs in years times. It’s a masterpiece, pure and simple.