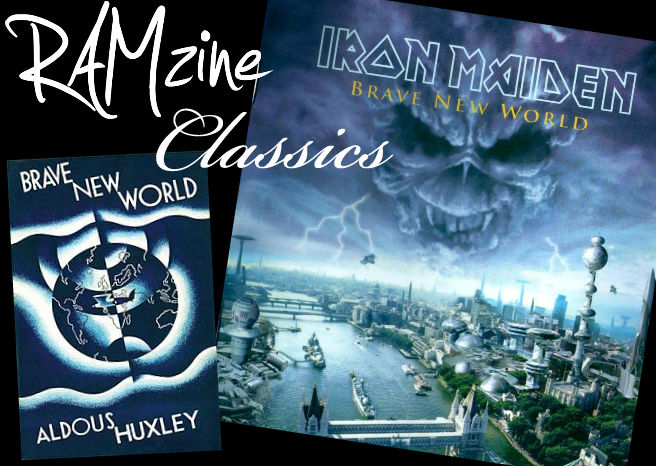 The year 2000 was a strange time for rock and metal. Nu-metal was really catching on and the classic guard seemed to be becoming irrelevant. All of that changed with the release of Iron Maiden’s “Brave New World”. Singer Bruce Dickinson and guitarist Adrian Smith returned to the fold, and along with bassist Steve Harris, guitarists Dave Murray and Janick Gers and drummer Nicko McBrain, they set about re-igniting the world’s passion for metal and Maiden.

The album opens with the catchy The Wicker Man, and from its opening riff, you can tell this is going to be a special album. Dickinson’s return to the band after seven years truly gives this album spectacular new life, and along with Adrian Smith who was returning after a ten year absence, the song sounds like this is a brand new band. The song develops quickly, with the chorus part in particular being totally anthemic and the way the guitar solos flow is amazing. What a stunning opening song.

Next is Ghost of the Navigator, which is the first “Maiden Epic” on this album. The main riff is an absolute stomper, and one which sets heads banging. The time change as the chorus hits in is simply perfect, and this really is a band on top of their game. Harris’ songwriting skills are just second to none and the way he has his band performing is unreal. However, there is a riff in the instrumental mid-section which simply gets the blood flowing and just makes you want to jump around and rock out. It’s these sensational pieces that really set Maiden apart.

Following on is Brave New World, another epic track. The off-beat feel to this song is a surprise, and is a bit of a departure for the band from their usual straight up galloping style. The three pronged guitar attack of Murray, Smith and Gers really comes to the fore here, with their layered guitar parts interweaving beautifully creating a wonderful effect. This is one of the more well known songs on the album, and it is not hard to see why.

Next is Blood Brothers. This song has a fantastic sense of dynamics and there are many moods to the song. McBrain’s sense of these dynamics on the drums is wonderful, and shows his versatility as a player. It proves that all rock and metal drummers aren’t Neanderthals. The majestic nature of this song and it’s 6/8 time feel really brings out the bands technical skills; Harris’ bass guitar ability and songwriting skills have never been questioned and he proves himself once again here. The beautiful mid-section is structured perfectly and throughout this song, Dickinson’s vocal range really shines through.

Up next is The Mercenary, a classic Maiden rocker. The call-to-arms of “show them no fear, show them no pain” is a wonderful chorus lyric and brings the crowd together, hence why it was written. There are some serious riffs in this song and McBrain keeps the song going at a relentless pace before dropping into an interesting half time groove during the chorus. Even in their more simple songs, the band seem to be able to make everything mindblowing.

Following this is Dream of Mirrors. This song is nearly ten minutes long, yet never seems to drag. The eastern feel with the clean guitars is amazing, and brings images of sweepinge deserts to mind. The mid section where to song goes heavier, yet with the same tempo as the start, is simply brilliant. Maiden songs always have repeating parts, and this song follows that blueprint. This is what makes them so effective as a band and allows their long songs to always be interesting, and they all have memorable parts. For a lesson in how to construct a lengthy relevant song, listen to this.

Next is The Fallen Angel, a galloping metal masterpiece. This is classic Maiden; the main riff being a mix of chords and rhythms, and the bass and drums swing along together perfectly. The lead guitar line over the chorus adds an extra musical feel, and makes this simple song seem even more complicated. A solid album track, which should really have been released as a single.

Up next is The Nomad, a real Eastern style epic in the vein of “Kashmir” by Led Zeppelin. Except, this is like Led Zeppelin fused with Maiden and the result is simply astounding. The guitar melodies at the start are just insane, and the layered guitar parts flow in and out of each other like vines. Dickinson must be commended for his vocal range once again; from the mid range notes of the chorus to the high chorus, his voice can reach almost any note. The guitars take most of the credit for this song however. Murray, Smith and Gers really know each other’s playing and the layers really add a true originality to the already signature Maiden sound.

Following on is Out of the Silent Planet, a song which seems shorter than it actually is due to the amount of repeating parts. This song relies on the signature Maiden sound of chords mixed with insane riffs. The skills of the band are really unparalleled, and especially the bass on this particular track. Harris is one of the best bass players in rock and metal, and proves it here. The time changes with the whole band are still extremely tight and simply proves that they are masters of their craft.

Closing the album is The Thin Line Between Love and Hate, which is a really heavy album closer. The real upbeat feel of the heavy riff is simply excellent, and it is mainly thanks to the drums. The harmonised vocals through the song has an almost unnerving effect and is an example of how Maiden’s close relationship with their producer Kevin Shirley works so well. The first guitar solo in this song is incredible; it calls back to Richie Blackmore when he was in Rainbow. Simply a stunning closing track.

In closing, this is the perfect album. It was the first album I ever bought, and I have not looked back. It has sweeping vocals, riffs, technical guitars, beautiful harmonies, rolling bass and heavy drums. Iron Maiden are the most inspirational band I have ever heard, and I would urge anyone, young or old, musician or not, to check this album out. Perfection.