The Saturday afternoon of Download Festival 2013 was full of fantastic bands. However, when this writer walked into the main arena and saw the singer of the band that was playing at the time was doing something utterly brilliant. He was body-surfing across the stage on a piece of wood with wheels on during their final song. This man was of course the brilliant Biff Byford, and the band was the legendary Saxon, playing “Wheels of Steel”, the legendary title track from their seminal 1980 album. 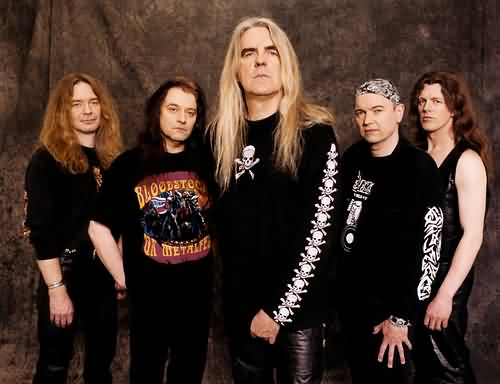 On first listen, it’s evident that the album is fun in its purest form. The energy of the band and particularly Biff’s vocals show this, they’re having the time of their lives making this album. Opening song “Motorcycle Man” starts with revving motorbike engines, and fades into an absolutely frantic song about the thrills of the open road. The guitar work is simply stunning and it really sets the album off at a breakneck pace.

The next track is “Stand Up and Be Counted”, and is a song which brings to mind David Bowie, but if he was raised on a diet of Metallica. The song really swings and the guitar harmony in the chorus is so evident of the New Wave of British Heavy Metal (NWOBHM) scene that Saxon were a crucial part of. This song is constructed beautifully and offers a subject which the youth of the time could really relate too, and the youth today as a matter of fact.

Following on is the first real highlight on the album “747 (Strangers in the Night)”, a song based on a real plane crash in Scandinavia which occured around the time this album was recorded. The song starts with a simply stunning guitar solo which has the absolute objective to melt faces. It comes out of nowhere! The song then delves into a classic rocker, with some fabulously haunting guitar work in the chorus, bringing the thought of mist overhead. The story told by Byford’s lyrics really comes through and this song has become a real live classic for Saxon. It is not hard to see why.

Next up is the next highlight, the iconic “Wheels of Steel”. This song follows the same riff all the way through but doesn’t sound boring. This is why it so classic; it is so simple, yet stunningly effective. The song has been stuck in this writer’s head since Download 2012! The vocals are spat with anger by Byford and the drums and bass keep a real solid base to allow the song to fly.

Up next is the brilliant “Freeway Mad”. This song really swings, and like previous tracks is about the freedom of the highway and the joy that brings. It really brings back the spirit of bands like Steppenwolf and Bad Company, but with more aggression. Saxon really created a sound of their own on this album, and it is fantastic.

Following on is the awesome “See The Light Shining”. This song is based around a simple chord structure and the bouncy riff has been stuck in my head since I first heard it. Byford’s vocals turn this almost emotional song into a speedy rock number, and it classic NWOBHM which has influenced so many bands around these days.

Next up is the aggressive “Street Fighting Gang”, a song which has music which really fits it’s title. Again, this is a song which the audience can identify with on the subject matter. The brilliant mid-section is broken up by pre-recorded sounds of whistling and shouting, which really makes the song original. The sing along chorus is fantastic and has a melody which sinks deep into the listener’s subconscious.

Up next is the funk-filled “Suzie Hold On”. This begins with a galloping bassline and sparkling hi-hats, launching into a good old fashioned rock and roll song, in the mould of The Rolling Stones. This is a fantastic surprise and real highlight on this album. There’s also a fantastic drum break in the middle of the song, which is absolutely blistering adding another dimension to this stunning song.

Closing the album is the storming “Machine Gun”. Again, this is another track which lives up to its name, the machine gun in question being the storming guitars. They really drive this song and attack the ears of the listener with scoped precision.

In summary, this album is everything that I expected. It’s fun, it’s loud, it’s crazy and it’s so inspirational to any young metal band. To anyone who enjoys having fun and enjoys a good guitar riff, I say buy this album! You will not be disappointed.