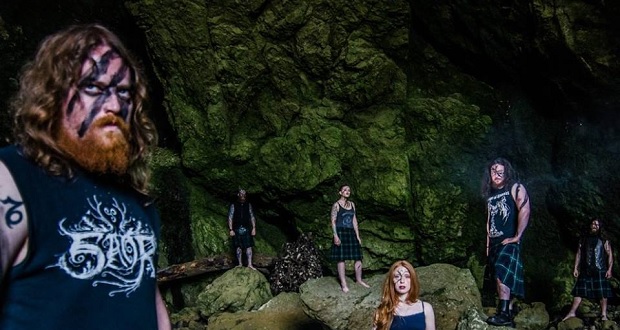 Bloodstock weekend is upon us! As always, RAMzine are on site. First up are Galway folk-metal band  -Na Cruithne.  We talk to guitarist Rónán Ó ‘hArrachtáin about winning M2TM,  being a folk-metal band…and  a lot of swearing!

How does it feel to play Bloodstock 2017?
It’s been amazing. This will be the icing on the cake for a great year for us.

How did you feel about winning M2TM?
We did not expect to come so far, the standard is so high, un-fecking-believable.
What do you feel gave you the edge at the competition?

We were the only Folk Metal band playing and that probably raised some eyebrows but we brought some of the Galway madness across the Shannon and gave it socks for every gig during the competition. We played the way we would for any gig and forgot about the competition, had the craic and let loose and the crowd responded.

For people who have not heard your music before – what do Na Cruithne sound like?

Which other bands at the festival would you like to see?

What kind of bands did you listen to growing up?
Between us? Lots. Rory Gallagher, Meshuggah, Kila, Planxty, Queen, The Bothy Band . There’s 6 of us, this question would take an age…

What can we expect from you’re Bloodstock show?

What is next for the Na Cruithne?

Next step is the release of the music video for “Fhoinnuisce” which will be our second music video from “Gairm an Fhiantais” and then we’re heading into 2018 with a heap of new tunes and invading Europe!

Check out Na Cruithne on the New Blood Stage at Bloodstock Festival, on Sunday 13th August.