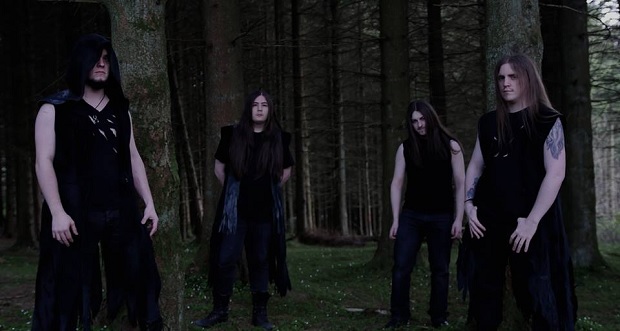 The last in our interviews leading up to this year’s epic Bloodstock Festival. The band in question are melodic death-metallers -Shrouded.  We spoke to vocalist/guitarist Shane Hughes about winning the Belfast M2TM, what it is like to play Bloodstock, and his influences.
…
How does it feel to play Bloodstock 2017?
It’s totally surreal. It’s been a lifelong dream of all of ours to one day be able to play a festival. Bloodstock is a really special festival to us so are extremely thankful to have been given the opportunity.
How did you feel about winning M2TM?
Winning Metal 2 The Masses felt amazing. We had actually taken part in the competition in the 2 previous years as well but never made it to the final, so winning it this year felt like we had really progressed to a new level as a band.
What do you feel gave you the edge at the competition?
We went through a big change in our live show this year with the addition of custom live outfits, lights and fog. I think that little bit of theatricality to the performance was what made us stand out. That being said, the Belfast competition was fierce this year, there were a lot of great bands involved.
For people who have not heard your music before – what is your sound like?
At it’s core our sound is Melodic Death Metal but it would edge more towards the Death Metal side of the genre. It’s fast and brutal but also melodic. We also take a lot of inspiration from Black Metal, particularly in our melodies. They are definitely darker sounding than most. It’s in the same vein as bands like Hate and Bloodbath.
What kind of bands did you listen to growing up?
Growing up there was a good bit of punk and rock in all of our childhoods so that was probably the trigger for the love of metal! We all listened to fairly similar things when we started listening to metal. In the early days Iron Maiden, Motorhead, Judas Priest and Black Sabbath were what it was all about but gradually we slipped further into extreme metal. Bands like Wintersun and Bloodshot Dawn are mutual favourites, along with the likes of Dying Fetus, Bloodbath, Deicide, Cannibal Corpse and Behemoth.
What can we expect from you’re Bloodstock show?
Relentless blast beats, soaring melodies and crushing slams, to name a few things. It will be a very energetic show, perfect for those Sunday afternoon blues that everyone will be feeling.
What is next for Shrouded?
We have a few more shows lined up for the rest of the year but the primary focus of the band now is to get our debut album out. We just released a new EP on the 1st of August but we have a lot of songs written or partially written. Nothing is set in stone yet but we are aiming for around Easter next year. We also have a gig in January supporting Bloodshot Dawn which we are really looking forward to.
…
You can catch Shrouded on the New Blood Stage at Bloodstock Festival, on Sunday 13th August.
Share
Facebook
Twitter
Pinterest
Linkedin
Email
Print
Mix
Previous articleDecrepit Monolith – Road To Bloodstock 2017
Next articleInterview: Na Cruithne – Bloodstock 2017