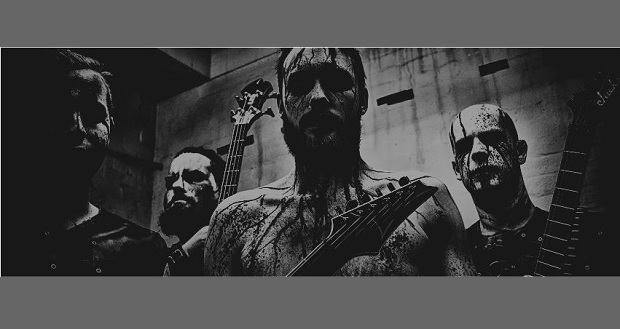 Next in our series of interviews on the road to Bloodstock 2017, with the festival starting tomorrow, are Newcastle’s Metal 2 The Masses winners – Decrepit Monolith. We spoke to vocalist Odious and guitarist Baal about their contribution to the M2TM competition, their influences, and their famous ‘Fuck Your Faith’ slogan.

How does it feel to play Bloodstock 2017?

Baal: Fantastic, the festival has always been the torch bearer for the heavier side of music in the UK and finally getting to play is something we have aimed to achieve for some time now.

How did you feel about winning M2TM (Metal To The Masses)?

Baal: Humbled, truly humbled by the response we got through all the heats, but also very glad. This is the first time we have taken part in the competition and to get straight through amid the talent that was in our regional heats is insane

Odious: It’s an honour to be representing the North East and Black Metal in general.

What do you feel gave you the edge at the competition?

Odious: The competition was tough but we feel that our different musical style and look really set us apart from other bands. Our use of theatrics, along with our extreme sound seemed to stick in people’s minds – like us or not.

Baal: We put a lot of effort into our live show, our look and performance – it adds another dimension, one fitting with our sound.

For people who have not heard Decrepit Monolith – what is your sound like?

Odious: Our music can range from bludgeoning, droning dirges to blisteringly fast, breakneck blast beats. Our new direction is heading more into the oblique and esoteric realm, making more use of a-tonality, ambience and antiphony, whilst still keeping our extreme edge.

Baal: We try not to put ourselves in one box, the best way to describe it generically would be as ‘blackened’.

Which other bands at the festival would you like to see?

Baal: There are a lot of other new blood stage bands I would like to check out, the upcoming talent is always a fantastic and varied mix. As odious mentioned we will be checking out The Infernal Sea, they are insanely good and Nordjevel are a favourite of mine too.

What kind of bands did you listen to growing up?

Odious: We all share a common love for classic heavy metal and thrash; Maiden, Testament, Slayer, Metallica, but our eclectic tastes are really what give the band the variety in tonality.
Your merchandise with the slogan ‘Fuck Your Faith’ is proving popular, what is the thinking behind this?

Odious: We feel that religion has hindered the progress of our human evolution, it has rewarded the greedy and lied in the faces of the sheep who have followed. This all-encompassing ‘middle finger’ to all faiths seems to resonate with a society that has had enough of its ideocracy.

Baal: It is hard to believe that organised religion still has such a grip and control over people. It distorts and pollutes people’s opinions and takes away their ability to live how they want. Most of the atrocities happening around the world stem form religion, so fuck em.

Do you have a new album in the works?
Baal: We do, after Bloodstock we plan on putting some time aside to start work on it.

What can we expect from you’re Bloodstock show?

Baal: Something to remember hopefully.

What is next for Decrepit Monolith?

Odious: We have a few more live shows in the pipeline.

Baal: Then more writing and the studio, we want to get some new material out there to show the band as we are now, the evolution from the last EP.

Odious: Until then we’ll keep refining our material and bringing the litany to the masses.

Check out Decrepit Monolith at Bloodstock Festival, on the New Blood Stage, this Saturday (12/8/27).