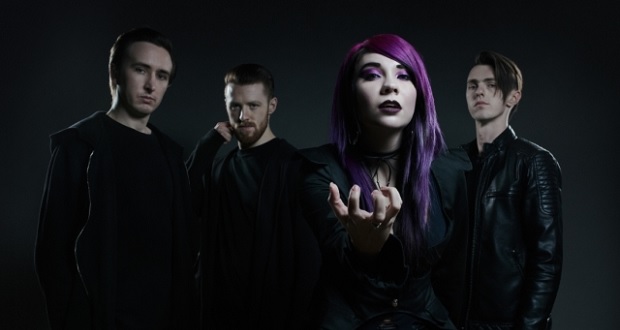 You may have heard Skarlett Riot supporting various bands such as LA Guns, Deaf Havana and more . You may have also caught them at various festivals around the UK. The Scunthorpe four-piece are back with a new album ‘Regenerate’ and have signed with Swedish label Despotz, as well as a string of tour dates later this year. We caught up with lead vocalist Skarlett to talk about the women in rock, the new album,  and their own ‘regeneration’.

What can you tell us about your new album, ‘Regenerate’?

Regenerate was written as a uplifting message to anyone who’s going through a rough patch in life. It’s never too late to learn from your failures and successes, to change path and turn things around. We all have the ability to shape our futures. Restore, rebuild, regenerate.

Is the title a reference to the regeneration of the band?

Yeah definitely, we’re using this album as our fresh start, a new sound, image, label. We can’t wait to find out what our fans think of the new music!

You are also on tour soon, are you looking forward to playing some parts of the UK you haven’t been to before?
Definitely, it’s gonna’ be great to play the new music live too on such a long run. We head into Europe for the first time too. We have 4 German dates in December! We can’t wait!

Speaking of which, how does a rock band get noticed in Scunthorpe?
We played our home town a fair few times when starting out, then I went onto finding out promoters in close cities, and begged our way onto opening slots. Eventually those promoters were asking us to play and it went from there!

So how did Swedish label, Despotz Records, get in touch?

They had a listen to our previous EP ‘Sentience’ and loved it. The label contacted our management and it took off from there. It’s nice to have a label who believe in what you do musically and just want to support and help you to get to the next level.

You also model from time to time, do you think this brings more attention to the band?

I wouldn’t say so, I tend to keep my modelling and band pretty separate.

Do you feel women in bands are seen differently these days, as there are more female musicians in rock?
Yeah I’d say so. It’s nice that females can rock too without being judged or told to get back in the kitchen y’know 

So after the tour and album, whats next?

World domination?! Haha, we’ll be looking at touring again in Spring next year, we are looking at playing more in Europe too!

Regenerate is released on the 27th of October. Skarlett Riot will support Santa Cruz on their UK tour in November