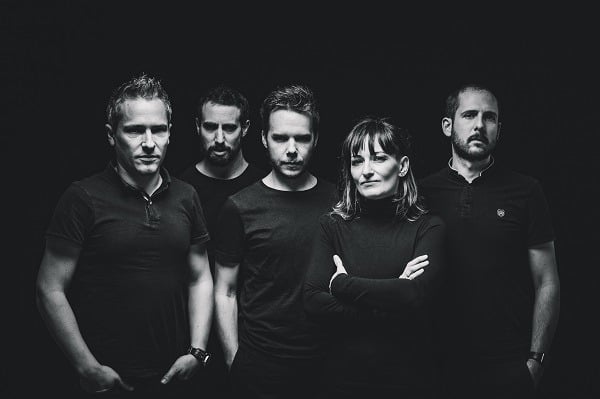 We recently caught up with Nicolas Foucaud, vocalist, guitarist for Los Disidentes Del Sucio Motel or LDDSM as we will be referring to them, following the release of their new album Polaris which was covered in the latest issue of RAMzine.

Here’s what Nicolas had to say on the recording during a pandemic, LDDSM current plans, their future space exploration and much more.

Getting the elephant in the room out of the way first, how was your 2020 and how has 2021 been for you so far?

Like everyone else there were ups and downs, but from a purely personal perspective I have nothing to complain about. My family is doing well, all the people I know who got Covid have come through ok and with the release of Polaris, I have the feeling that LDDSM has never been so strong and cohesive.

With your record coming out earlier this year was it impacted much by Covid and the pandemic?

Yes of course. We started composing the album about two years ago. We were able to record the instrumental demos just before the first lockdown. Then, we had to go on with the vocals and the keyboards, which is a very important part of the work of an LDDSM album and the health crisis arrived and everything stopped dead. So we had to adapt and work remotely. It was a first for us. We usually work the old fashioned way, in a dark rehearsal room at full volume. This time Katia, Dany and I we were behind our screens in video conference, writing the harmonic lines. It was a weird experience but at least we learnt a lot of it. In the end, we happened to be very lucky, since we were able to record the album right between the two lockdowns, last summer.

“As people we change, we learn, we live and it’s natural for us that our music does as well”

How much, if any, of the album was recorded during the pandemic?

Actually, the entire album. But like I told you, we booked the White Bat Recorders Studio for the right period. We were allowed to go out and be together. It was the end of the first wave and we were in the pandemic’s lowest. Since then everything has started up again and releasing an album in these conditions is really very difficult.

With Polaris finally out there, my own personal experience with the record was very positive as reflected in my review, how has the wider reception been so far?

Very positive! We are very touched to read all these reviews and for the most part, we feel that we have been understood. People understand we have made our sound evolve, without losing what has always been our signature, our roots, the melody and the fuzzy sound. We just wanted to push the limits even further and add this more progressive touch to our universe. Many have noticed this and have this very interesting feeling, listening to something that seems familiar to them but totally unique at the same time. We love it!

There was a five-year gap between the release of Human Collapse and Polaris. Was there anything in particular that caused such a gap?

First, you should know that we are quite slow! Then we had important changes in our personal lives, especially with the birth of our children, which inevitably turns a life upside down. Personally, I also released the SAPIENS album, a more personal acoustic project aside LDDSM with other musicians, which took me two years. Then we’ve had to find a new bass player and any change of line up takes time too, even if with Katia it worked from the very start between us. Finally, I believe that we are also perfectionists and that we wanted to release an album that we would be fully satisfied with and for that, it takes a lot of work and time.

Your sound has been described in various ways from stoner rock to prog, to space or even liquid rock, either way, your music is very unique to you but how would you describe your sound?

For this album, in particular, I would say “organic “. It is really the word that immediately comes to my mind when I listen to Polaris. The fact that it was recorded on tape and live, gives it a really particular sound colour. As for the themes approached, they make the link between Man and the Universe and the subjects are universal and concern all of us, deep inside, in our thoughts, in our molecules, in our lifestyles … Even if I don’t really like it, if I had to put a label on the current sound of LDDSM, I would say stoner prog. It is maybe what would fit the best, but it wouldn’t even cover all of our influences, ranging from pop to death metal or punk.

No two LDDSM records are the same and Polaris is no expectation, is there a conscious effort to make each record as unique and varied from each other as possible?

It’s clearly not a deliberate will at the beginning. I would simply say that our music evolves with us. As people we change, we learn, we live and it’s natural for us that our music does as well. What is certain is that we don’t like the easiness, or repeating ourselves. Releasing the same album twice doesn’t interest us, but when we start to compose, we don’t say to ourselves “this album must absolutely be different from the other”, it comes naturally with the context in which it is written, the desires and the ideas that arrive. The theme plays a great role, however. The idea of evoking space on Polaris, or the end of the world in Human Collapse, inevitably impacts a lot in the writing and the atmospheres. This is what makes all the difference from one album to another.

With Polaris being described as “A journey through Man and the Universe” would you say this is strictly a concept album ?

Yes, it is, like every LDDSM album in fact. Each song evokes a different bond between us and the Universe. We realised as we worked on it, that this link could be manifold. It can be spiritual, political, biological, philosophical, emotional… It’s not only this attraction, this fascination that we all have for the spectacular images of galaxies, planets and nebulae. In the end, everything is made of the same material and everything is connected. You, the ant, the stone, the sun, the comets, everything is different and yet everything is united. The balance is so fragile.

How eager are you to be able to take the record on the road and actually tour again?

Oh, we can’t wait! It’s been two years since our last show! Two years! Our bassist left, then we had to find his replacement, then Covid appeared and screwed everything up. But it is extremely difficult to project yourself. Our booking agent is slowly starting to see certain things evolving, but everyone remains very careful and we are constantly walking on eggshells. Polaris has to be defended live, it was written for that. We’re dying to share it on stage now!

Do you have any plans to promote the album virtually while the global situation continues? Any plans for live streaming shows?

Let’s say that we work on our set to be ready when the time comes. Currently, we have not planned anything concrete, but we are thinking slowly. If we have to do it, it will have to be done correctly, with a good sound and beautiful images, otherwise we are not interested. It has to be a work in its own if we want that people could find a real pleasure in it. It’s not a priority at this date and we would be very sad to only defend this album through a livestream, but like everyone else, we have to adapt and bring the music to life at all costs, so why not.

“Each song evokes a different bond between us and the Universe”

What was the inspiration for the themes of Polaris?

We had this idea two years ago. We felt a real surge of interest in space in the artistic world with the anniversary of Apollo 11 and all this revival around the conquest of Mars. You could see it a lot in movies, series, scientific journals and as we are all fans of science fiction, it spoke to us too. Our parents are the generation who saw the first steps of Man on the Moon, maybe we will be the ones who will know those on Mars. On the other hand, we wanted to talk about it differently, in our own way and that’s why Polaris doesn’t focus only on one story or one character, but on very universal concepts.

I found there was an almost cinematic feel to the album, was this intentional?

Maybe not intentional, but totally logical yes. Films like Gravity, Interstellar, Alien, 2001: A Space Odyssey, Moon and obviously Star Wars, have inspired us a lot. LDDSM’s music has always been closely linked to cinema. Each of our albums is associated with a cinematic style.

As we touched on earlier it’s looking likely that live music on the European mainland won’t be back for a little while longer, what plans do you have as a band going forward?

At the moment we already have a lot of work on setting up the songs for a live set and promoting the album and it’s taking us a lot of time. Defending an album without doing any concert requires even more personal investment with the media. You have to be everywhere. We live in the era of the ephemeral, we have so much content that we even don’t know what to do with it. Everything, all the time. So if you want people to take a minimum of interest in your work, you have to keep feeding the machine, otherwise, you will disappear as quickly as you appeared. One bit of data among billions. I started to record certain things, to pose a few ideas here and there, we’ll see when we have time and feel ready to get back to the composition.

It’s not strictly speaking completely new, but we will soon be releasing a completely revisited version of ‘The Key’ of Polaris in acoustic. We changed it so much that it almost seems like we’re doing a cover of ourselves haha!

Finally, where can people find your record and find out more about you?

Directly from the band here :

And if you want to join us and communicate with us, you can follow the band on :

A huge thank you to Nicolas for taking the time to speak with us. Polaris is available now, follow the links above to pick up your copy.