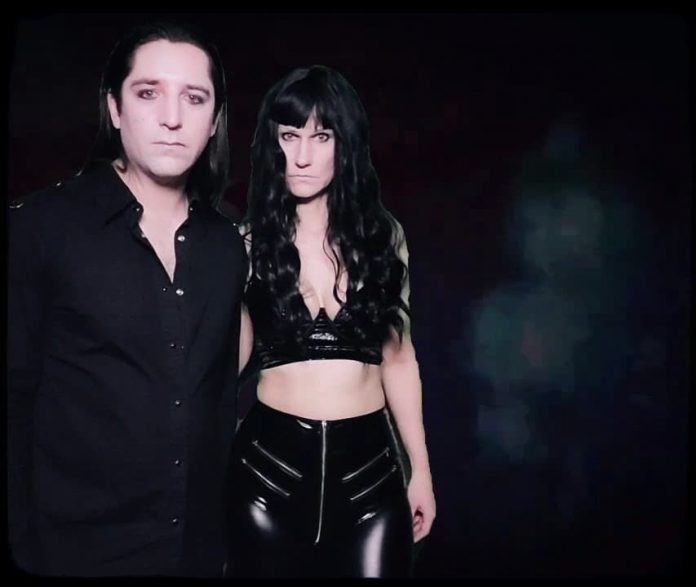 Detroit-based deathgaze duo VAZUM (composed of Zach Pliska and Emily Sturm) have unveiled their new single, ‘Haunted House,’ and its accompanying music video. The track is the leading single from VAZUM’s forthcoming album V+, which is due out this summer.

The track is based on an eerie and altering experience of Sturm’s that saw her awakened one night by a striking sound that suspiciously dissipated during both instances where she had stepped outside to see what had happened. The following morning, she learned that one of her neighbors had been tragically murdered in the night, and the experience — and what perhaps could have been done to intervene — is something that has haunted her since. This is what led to the track’s subject matter being focused on the terrors of domestic violence and its dark aftermath.

VAZUM matches the intensity of the lyrics with a rich and nervy score that both builds in a manner that keeps the listener on the edge of their seat and simultaneously displays the duo’s inherent knack for bold sounds and technical skill. A particularly notable aspect is the manner in which Sturm uses her vocal stylings as a storytelling agent in and of itself. The beginning of the track sees her undertake a softer and almost ethereal tone, strengthening on the explosive choruses, and then the final moments of the track see her masterfully hit high notes that not only warrant a well-deserved parallel to Heart’s Ann Wilson, but cements her status as a truly exceptional rock vocalist.

An element that makes the verses powerful is the interplay between Sturm’s softer vocal tone and Pliska’s searing guitar riffs, which play an instrumental role in setting the foundation of the track and subsequently the captivating build of tension that makes it so unforgettable. This also highlights the natural cohesion between Sturm and Pliska as a creative unit, and this synchronicity is something that makes VAZUM a major player in the heavy rock landscape.

The music video for “Haunted House,” which was fully spearheaded and brought to life by the duo themselves, is just as skillful and impactful as the music. Between the dark lighting, the imagery of an empty rocking chair moving on its own, the costuming, and the performances Sturm and Pliska both give, the video expertly matches and amplifies the track’s portentous presence. In all ‘Haunted House’ is not only an exciting step forward for VAZUM, but a source of major intrigue regarding the skill and surprises V+ is sure to entail.

Click here to check out VAZUM’s existing discography on Bandcamp, and here on Spotify.