Unsigned Band Of The Week: Holding Out 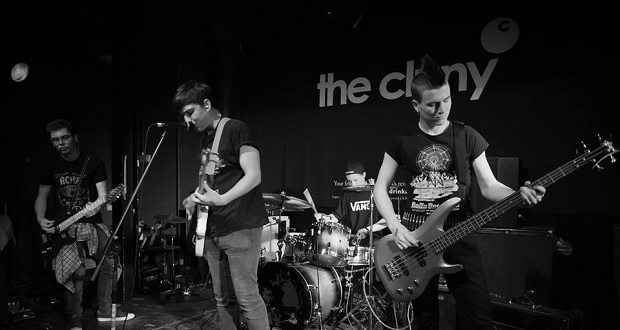 The punk pop influence can be found everywhere it seems these days, and produces a lot of great bands too. Our first ‘Unsigned Band Of The Week’ interview takes us to Newcastle, where we spoke to the lads from Holding Out. Check back every week for a new unsigned band interview. If you would like to feature on this page, contact contributing editor neale@ramzine.co.uk and we will get back to you in due course.

Holding Out, How would you describe your sound?

Jason Toward (Guitar, BG vocal): I would say our sound is pop punk, with some metal, blues rock and glam all combined.
Charlie Sanders (Bass):  Punk rock, with our own twists and influences piled on top.

What bands do you look up to?

Ellis Paul (guitar, lead vocal): Too many to reel them all off. One of my personal biggest influences are Creeper. I feel they’ve definitely been responsible in shaping our sound and reviving the whole mid 2000’s emo culture in the UK (which is always a good thing). The way they came from playing little shows only a couple of years ago, to blasting onto the scene and playing gigs like Download and Leeds festival is really inspiring.
Ryan Hubbard (drums):  I look up to Neck Deep as one of my biggest inspirations. Especially Dani’s drumming style and the raw aggression of their writing.
Jason: Bon Jovi, Neck Deep, Foo Fighters, and Guns n Roses for me.

Where did the name ‘Holding Out’ come from?

Ellis: Looking back it’s kind of embarrassing to be honest. The name was never meant to be anything more than temporary. It came about when I was asked to play an acoustic show but didn’t feel comfortable enough to use my own name, so I decided to make a band name and bring members on board as I went along. ‘Holding Out’ came from the end of Shrek 2 where ‘Holding Out for a Hero’ is playing in the background of the big fight sequence. It’s really dumb and I was really intoxicated when I chose the name, but it just kind of stuck. Nobody has ever really said ‘hey, your band name sucks’ so we just kind of stayed with it.

Ryan: I hope we can play Warped Tour at some point, ‘alternative’ festivals in the UK seem to be on the rise at the moment and we couldn’t be happier that our favourite music is getting wider acclaim and being part of that would be amazing.
Jason: I want to be able to play and write music and not do anything else. I don’t need to be world famous, just enough to be able to live off our music. Touring would be great and playing Download festival is a dream of mine.
Ellis: As long as we’re still making music and playing shows to our albeit small but dedicated audience, I’ll be happy. Anything else is a bonus really.

How did it feel to support Muncie Girls?

Ellis: It was pretty cool supporting Muncie Girls to be honest. It was the first time we’ve ever supported a signed band who tour frequently, not counting our good friends in Seconds Apart. The feeling of being the first band to ever play at Think Tank Sunderland was awesome too. New venues deserve all the support they can get and it was such an honour kicking off what is hopefully a long run of shows for the venue.

Are you working on anything new right now?

Ellis: We’re working on something pretty big at the moment. Unfortunately, we can’t spill it just yet. Announcing new projects too far in advance kind of ruins the excitement in my opinion. All I can say is to keep an eye out on our Facebook page for future updates and previews of what we’re working on.

Do you feel it’s easier for bands to get their music heard these days?
Jason: Mediums exist that give you a platform to share your music but because it’s so easy it’s become very difficult to stand out from all that.
Ellis: I’m with Jason on this, the sheer volume of new music that’s around is wonderful, especially the local scene in Newcastle, the amount of talent is awesome. However, with so many bands vying for attention and coverage it’s difficult to get your music out there to a mass audience.

What are your non-musical influences?

Ellis: At a risk of sounding corny, our friends, family and fans. Without them we’d have nobody listening to our music and nobody coming along to our shows and rocking out with us.

Ellis: We’re supporting High Anthem at Newcastle o2 Academy December 20th, that one isn’t to be missed. Aside from that, nothing we can announce just yet, keep your eyes peeled. You can find our recently released EP on Spotify, iTunes and YouTube (With some extra early days footage on our YouTube Channel)