How to Bet on the Kentucky Derby 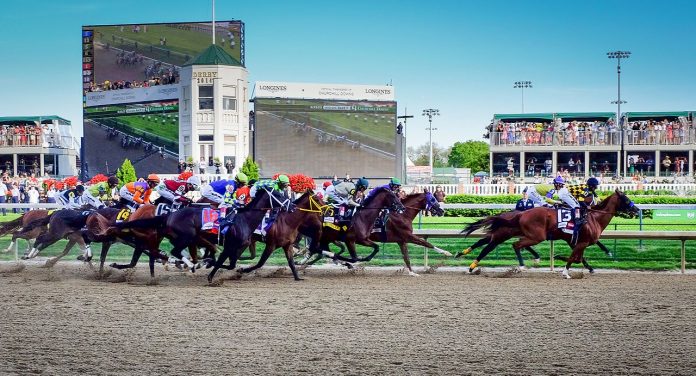 How to Bet on the Kentucky Derby?

The Kentucky Derby is one of the highlights of the sporting year. Simply watching the Run for the Roses is great entertainment, but what if you’d like to bet on it too?

Thankfully, this isn’t as difficult to do this as you might fear.

The truth is that you can bet on the Kentucky Derby without knowing very much about it. However, if you want to give yourself the best possible chance, it makes sense to do a little bit of research first of all.

The Kentucky Derby in 2021 will be the 147th running of this legendary horse race. It will be held at Churchill Downs, in Louisville. The horses run over 1 ¼ miles to see who will be this year’s champion. It is called the most exciting two minutes in sport because that is roughly how long it lasts for.

The Derby will take place on May 1 this year, having been moved to later in the year in 2020 because of the Covid-19 crisis. The attendance will be lower than usual due to restrictions, but we still expect to see a good atmosphere inside the race track. The race will begin at 6.57 pm and the total purse is $3 million.

Look at the Favorites

20 horses in the three-year-old thoroughbred category will take part in the Kentucky Derby this year. These are the horses that have managed to get through the qualifying races in order to compete here.

The list of qualifiers is led by Essential Quality, at the time of writing. This horse from the Godolphin stables is trained by Brad Cox and ridden by Luis Saez. He has picked up 140 points on the road to the Kentucky Derby with wins in all five of his races, including the Southwest Stakes and the Breeders’ Cup Juvenile.

Behind the favorite is Hot Rod Charlie, whose trainer is Doug O’Neill. Jockey Joel Rosario had ridden him to victory in the Louisiana Derby and a few other strong finishes, so he could be coming into form at just the right time to perform well at Churchill Downs.

Super Stock is trained by Steve Asmsussen and has recently moved up to third place on the list of qualifiers, with 109 points leaving him just one point behind Hot Rod Charlie. This horse won the Arkansas Derby and is worth keeping an eye on.

A few points further back is Like the King. This three-year-old colt is trained by Wesley A. Ward and has won two of his last four races. Among his victories was the Jeff Ruby Steaks at Turfway Park. Further back on the list are other highly-rated horses like Medina Spirit and Concert Tour.

With 20 horses in the field, there are also quite a few runners that aren’t such strong favorites but have a chance of winning. It is worth remembering that the Kentucky Derby has thrown up some mighty surprises in the past. These include Mine That Bird winning it in 2009 and Giacomo doing the same in 2005.

There are several different types of Kentucky Derby bet you can place on this race. The simplest is a Win bet, where you are wagering on your chosen horse coming home first. A Place bet pays out if he comes in first or second, while Show adds in a third place finish.

Click here to see more info about the Kentucky Derby race and the betting system: edge.twinspires.com/racing/kentucky-derby/

An Exacta bet is where you predict which horses will come first and second. Trifecta, Superfecta, and Super High Five are similar but for the first three, four, and five horses, respectively.

Don’t forget that you can place your bet online in advance of the race, which can be a way of getting better odds.