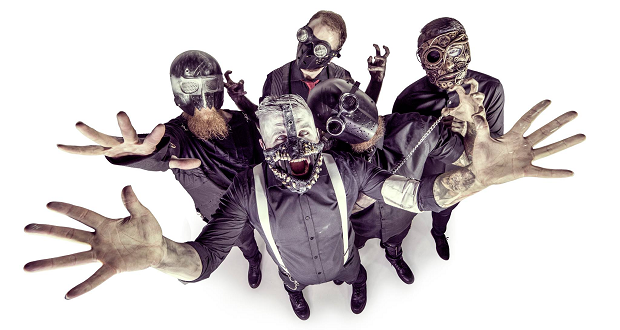 Lincolnshire nu-metal mob AntiClone are back – with a new look and more info on a brand new album.

AntiClone are working on their first full album, ‘The Root Of Man’, with producer Matt Hyde – who has previously worked with SlipKnot and Machine Head. This album is being released through a hugely successful Pledge Music campaign, and Plastic Head Distribution. Check out the lyric video for ‘Mechanical Heart’ below:

The Boston band have also revealed the album’s artwork (below) by Mister Sam, who famous worked with Rob Zombie and Fear Factory.

The Root of Man’ is intended to hold a dual meaning. Firstly, it questions the beginning of the human race, starting with Eve committing original sin which resulted in us being cast out of Eden. This is echoed in the title track with the lyrics: “The root of man is evil; the root of man is sin”. This theme is explored further throughout the album, looking at the extremes of human emotion and actions. The second meaning is that ‘The Root Of Man’ symbolises our beginning as a band. These are the roots that we are planting to fully establish ourselves as our own entity, to establish ourselves as Anti-Clone.”

AntiClone are picking up quite a few high profile fans – Skindred’s Benji Webbe being one of them, he says:

Anti-Clone have the full package! After having them support Skindred for 2 weeks, I saw them deliver an amazing performance night after night. I believe with the right direction they could be a ruling force in British metal!”

The debut album ‘The Root Of Man’ is released 29th April 2016 via PHD (Plastic Head Distribution).