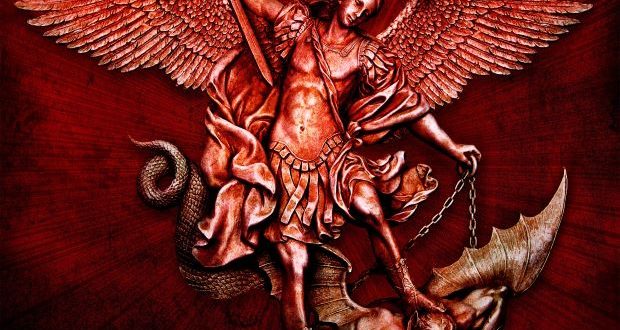 Ash Return with a Sharp Blade

Following the demise of hardcore German act Miozän, four members of the band decided to stick together, retaining their previous musical foundation but combining it with the classic metal influences, and thus was formed Ash Return.

Miozän’s Tank, Kniffel, Gerrit and Outso were joined by fellow singly named vocalist Johnny (of Gloryful) and claim to have invented a brand new genre they’re calling “swordcore”, that you can get to grips with on 1st May when this new band release the album The Sharp Blade Of Integrity on Swell Creek Records

The cover to The Sharp Blade Of Integrity helps pinpoint their goal, with the Archangel Michael turning his sword against a demon, and illustrating that the recordings were not an easy task. As Ash Return apparently spent a lot of blood, sweat and tears, alongside just as much passion during the process.

The Sharp Blade Of Integrity was produced by the band themselves, recorded by Jörg Uken, and produced by Dan Swanö.

What are we told to expect? Well, a consistent heaviness with catchy melodies, hardcore and metal forming a symbiosis, blitzing guitar solos with fist raising singalongs, diverse vocals extending from deep growls and hardcore shouting to virtuoso Bruce Dickinson heights doing the rest.

You can check that out for yourselves via the two videos we present here of the band, the first from their previous single ‘Time Is The Enemy‘, the second their latest one ‘Drown In Tears’, out now on Swell Creek Records.

Previous: Silverthorne release ‘Movin’
Next: Full concerts and documentaries you can watch on YouTube whilst Staying Home / Self-Isolating