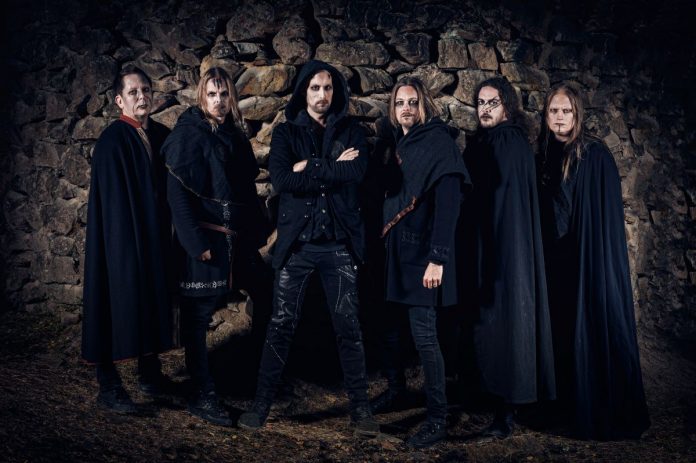 Swedish power metal band Bloodbound’s new album Creatures Of The Dark Realm is due for release 28th May on AFM Records.

The album has been preceded by three singles. ‘When Fate Is Calling’ came out in January, followed by the title track in March, and now ‘March Into War’.

“‘March Into War’ is a heavy bombastic anthemic metal hymn!” said keyboard player Fredrik Bergh. “It will be a great heavy song to include in our live set once the pandemic hell is over!

First single, ‘When Fates Is Calling’, was described as “a powerful and majestic song, that almost theatrically bonds its listeners and takes them into a modern power metal world that has been created very precisely and with ultimate artistic perfection”.

While ‘Creatures Of The Dark Realm’ was expresssed as a “stunning interaction between guitars and keyboards laying down hymn-like themes on a solid and power-driven rhythm section”.

You can check that out for yourselves via the official videos presented here at RAMzine.

Bloodbound surfaced in 2005 with their debut album, Nosferatu, an album that celebrated the band’s admiration for metal icons like Iron Maiden, Helloween and Judas Priest, recorded on a small budget with no visions of grandeur behind it. With eight studio albums, a live record and an EP under their belts since then, the band return with a renewed drive to take the band even further.

On paper, Creatures Of The Dark Realm satisfies all the requirements of what makes a power metal band, but the listening experience is intended as one of epic proportions.

“We have a few songs that didn’t make it onto the album because we want to have songs that really stick out, that have some qualities that make it interesting and fresh,” continued Bergh. “But, we are in a specific genre of metal so we can’t make a completely new style of music and call it Bloodbound. It can be tricky trying to not to repeat ourselves but I think we succeeded in doing that on the new album.

“If you compare this new album to Nosferatu, it’s totally different because of how we evolved over the years, but we always aim to come up with the best melodies we can. We take influences from all kinds of music genres of music because a good melody is a good melody. Look at bands like The Beatles and Abba. Their songs are timeless because of those melodies and that is what we were aiming for. Not to sound like those bands, of course (laughs), but to write songs that capture you immediately and stay in your head for days.”

Not a single ballad in sight, the new album is an-up-tempo assault through the songs ‘Eyes Come Alive’, ‘The Gargoyles Gate’, ‘Ever Burning Flame’, ‘The Wicked And The Weak’ and the title track., while there’s a heavy groove anthem offered with ‘Kill Or Be Killed’ and straight-ahead commercial metal on first single, ‘When Fate Is Calling’.

Creatures Of The Dark Realm is available for pre-order by clicking here.