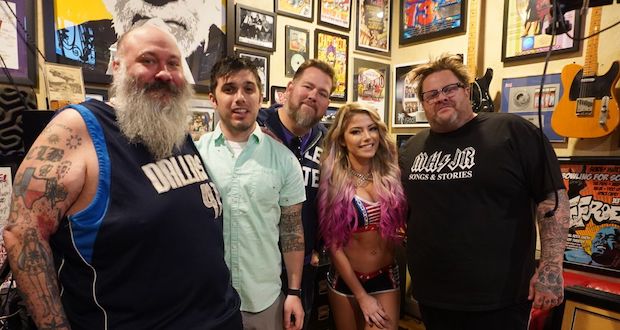 If you follow WWE star Alexa Bliss on social media, you will know she is a fan of pop-punk bands, especially Texas’ own Bowling For Soup. It was a matter of time before the two worlds collided in BFS’ new video – the aptly titled ‘Alexa Bliss’.

Check out the Weird Science-inspired video below:

This is what Alexa Bliss herself had to say about the track:

“This song is amazing 🙂 filming the video was such a great time I had a blast. It’s definitely a once-in-a-lifetime opportunity when your favorite band in the world makes a song about you. And Jaret is always so fun to work with and be around“.

BFS front-man had this to say about writing the track:

“Meeting Alexa Bliss was insane! Here is the freakin’ WWE Women’s champ, and she likes our band! I’ll admit, I checked her socials after we met the first time and saw that she had worn our shirt in a photo, and tweeted about listening to us in class while still in Ohio haha…

We became fast friends. She has been such a pleasure to get to know and has been so awesome to me and my family…why WOULDN’T I write a song about her?!? ”Five feet of amazing!!!”

Bowling For Soup is about to embark on a UK headline tour with support from Simple Plan and Not Ur Girlfrenz. Dates below:

‘Alexa Bliss’ (the song) will appear on Bowling For Soup’s new album. Details to be announced.