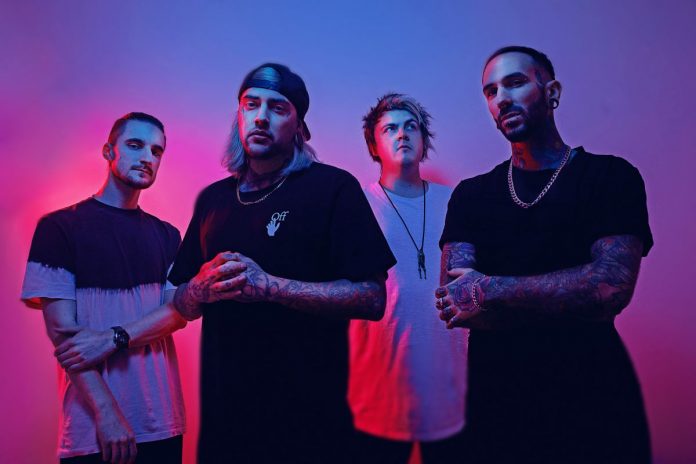 Slated for a May 27th 2022 release is the sophomore album from up-and-coming modern metal act Cabin Boy Jumped Ship, titled Sentiments it will be released through AFM Records.

Ahead of that they’ve just released a new single in ‘Golden’, that you can check out via the official video presented here at RAMzine.

“‘Golden’ is the last track we’re releasing before our new album, Sentiments, releases worldwide and we couldn’t think of a better song to kick off the album with,” said singer Conor Peek. “It has everything new and old fans of our band would enjoy and personally I feel like it’s a great unification of everything we embody. Get ready for the heavy!”

Founded in Leicestershire back in 2013, Cabin Boy Jumped Ship have been constantly touring around the world, from Europe, through to Russia and even the Philippines, sharing stages with bands alike Eskimo Callboy, Deez Nutz and The Devil Wears Prada.

Following two EPs and their 2019 debut The Heartless, the band’s blend of electronics and metal into what they call electronicore has turned dance floors all over the world into pulsating mosh pits.

You can pre-order Sentiments here.

Previously, they brought out the explicit lyric single ‘Ghosts’ – You can also catch the official video for it right here RAMzine, as you can their previous singles.

“‘Demons’ showcases the next era of Cabin Boy Jumped Ship,” said band frontman Conor Peek, of their single before that. “This track was one of the first demos created for Sentiments and when Reece showed the rest of the band the concept he was working on we knew that this would be the next chapter for the band. This is not one to miss!”

You can buy/save ‘Demons’ here and as noted you can watch the video for it right here at RAMzine, alongside the band’s previous single ‘Survivor’, of which bassist Jayke Davenport said: “I know this song is going to be one of my favourite tracks to play live. It’s one of the heaviest tracks released to date and I can’t wait to perform it with you all!”

“It feels so good to have new music out in the world again after so long and I hope our fans can connect with the feelings we portray in this new record,” added Peek on that one.

With more than two million streams on Spotify for The Heartless and more than a million views on their Youtube channel, Cabin Boy Jumped Ship has made an impressive stamp in the world of modern metal.

With new album Sentiments, a new record label with AFM Records) and their distribution partners Soulfood and Believe as backing, the four-piece will make a huge step forward.

“We are very excited that we signed the contract with AFM Records and being label mates of bands like We Butter The Bread With Butter or Lordi, to name just a few,” said drummer/clean vocalist Reece Miller. “That means also that our long expected second album will be released soon. We can’t wait to show our fans on what we worked hard for the last two years. And we would like to thank you for your patience.

“This new record is based around struggles that ourselves and the rest of the world can relate to in this day and age with the first track being a good example of what raw emotions the new album themes represents.”

The aforementioned band members, alongside guitarist Abel Aguado, recorded and mastered Sentiments at the Innersound Studios in York, England together with the Graves brothers Sam and Joe (Asking Alexandria, Glamour Of The Kill, InVisions).

Available as gatefold coloured vinyl, limited box set and digipak, the album  can be pre-ordered via AFM Records.