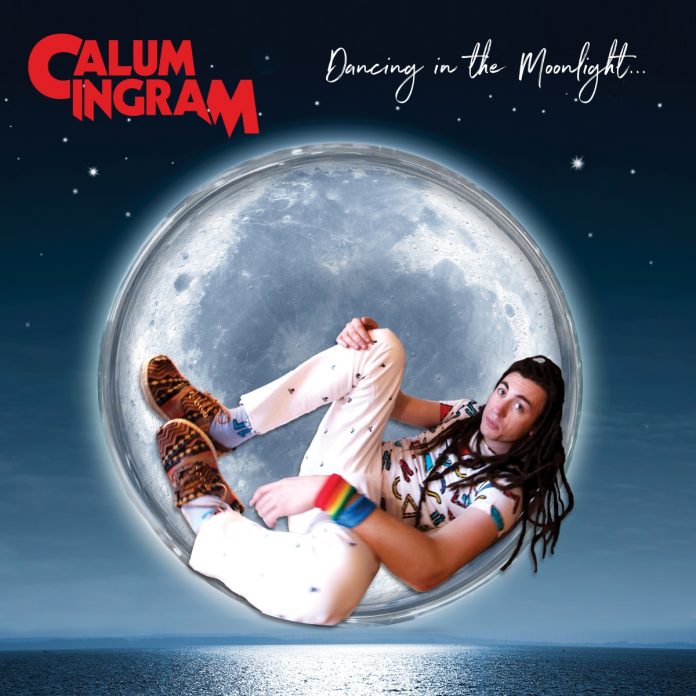 Alternative rock and roots cellist, singer and multi-instrumentalist Calum Ingram launches a double A side 7” inch vinyl single on ” on Friday 31st July, pairing the tracks ‘Dancing in The Moonlight’ and ‘Demon Eyes’.

‘Dancing in The Moonlight’ is a rather unique rendition of Thin Lizzy’s classic hit single, delivered as  a fun, positive and empowering answer to the strange climate the world seems to be in at present.

“What Calum does with the cello is amazing,” said famed record producer Tony Visconti (Thin Lizzy, T. Rex, David Bowie) who apparently suggested doing the Lizzy song he himself had first worked on. Ingram having worked with him on the 2017 Sky Arts TV series Unsigned Heroes back in 2017.

“The moment Tony Visconti asked me to come up with my own unique take of the track for 50 years celebration concert in London, I knew I could take it to another place,” reflected Ingram.

“I decided to play some guitar and a bit of bass to give a bed of rock for some funky cello riffs,” said Ingram. “‘Dancing in the Moonlight’ is showcased in a way like you have never heard before. I’ve tried to take the Thin Lizzy classic and turn it on its head.”

“I thought it would be an interesting idea to release two contrasting singles on one 7” inch vinyl,” he said on combining it with ‘Demon Eyes’, and it has been suggested we prepare ourselves for a journey like “Rory Gallagher meets 70s Brit pop and blues”, as a genre fluid sound sifting through pop elements and blues breakers style cello riffs is demonstrated

The songs were co-produced by Kirk Yano (2cellos, Miles Davis, Mariah Carey) in NYC and Ingram in Paisley, Scotland.

You can watch a trailer video for ‘Dancing in The Moonlight’ right here at RAMzine.