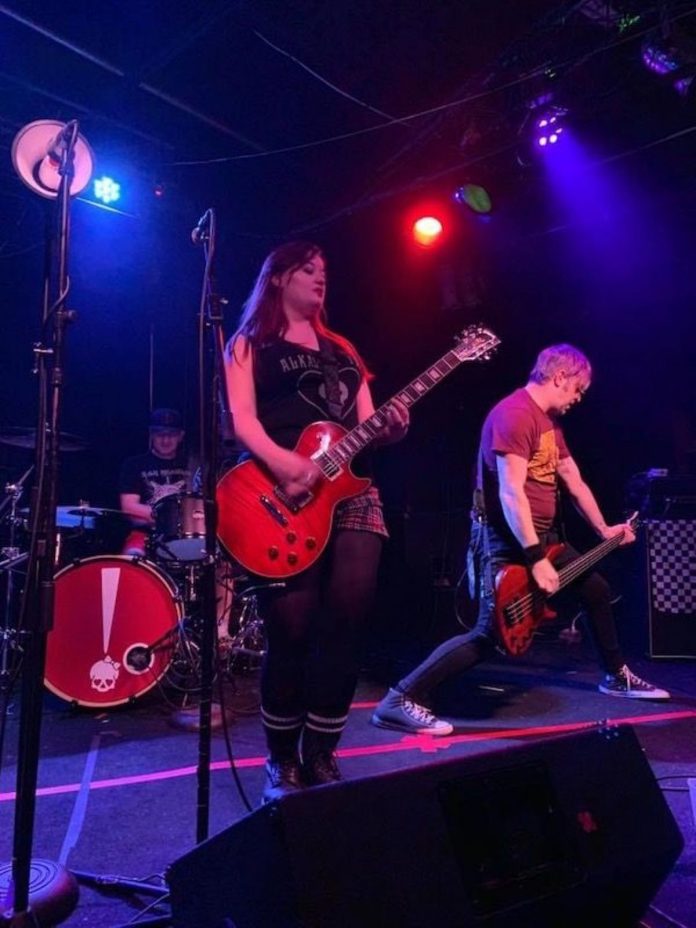 Las Vegas-based Crimson Riot has just released their new album It Took An Apocalypse, out now on Die Laughing Records on CD and on all digital platforms

“This album is very special for a lot of reasons. Aside from it being our first label release, we also had help from some very special people. On ‘St. James’s Gate’, the credit for the incredible Celtic instrumentation goes to High Grade Pats and our friend Ken Osborne. We were happy to have their talents assist us on this track,” said the band.

“Also featured on this album is former MTV and VH1 personality Matt Pinfield who was kind enough to help us educate the masses by reading the definition of punk to open one of the songs. On that same tune, we had the honour and pleasure of having the helping hand of none other than Matthew Lillard (SLC Punk, Scooby Doo) to drive home that, it doesn’t matter who started punk; it’s music.’’

When their prior band of six years, The Roxy Gunn Project, took a drastic turn as their lead guitarist had to leave the band due to medical issues, the remaining three members decided to take a different musical direction, follow their punk roots and in July 2017 that’s when they became Crimson Riot.

Their prior experience performing together and reputation allowed them to hit the ground running and acquire several high-profile shows right out of the gate. Crimson Riot was very well received by former fans of RGP, the media and fellow bands. Several promoters  jumped on board booking them to open shows, not least the Viper Room in Hollywood, USA.

In 2018 Crimson Riot won Who Will Rock You?, a tv series produced and sponsored by TopGolf, beating eight other bands from around the country earning the title and several fans around the country with several million views across various media platforms.

With the release of their first single and music video, ‘Here’s The Bad News Laura (The Shake Machine Is Down)’, a quirky, pop-punk anthem, that the masses could relate to, it became an instant hit prompting fans to bring milkshakes to shows.

Crimson Riot’s debut album, Classy Punk For Trashy People, an eleven song collection of original songs that include a plethora of different punk influenced styles received a massive pre-order from fans around the globe. The band’s DIY video for its single ‘Hurt’ grabbed over 1000 views in just a few days of its release.

The Pop Break Magazine gave it a 10 out of 10 and said, “Crimson Riot is the best punk band to enter the scene in a long time. With Roxy Gunn and Chris Reject on vocals, the band sounds like a cross between Tsunami Bomb and New Found Glory.”Dubbed the “Punk Rock Partridge Family” by iHeart Radio’s Bobby Bones, the band is lead by singer/guitarist Roxy Gunn with her husband Chris Reject on bass guitar and additional vocals, all held together by her father Ryan J on drums. Their songs are heavy, catchy, pop punk anthems, apparently getting the crowd immersed into each story “with music that delivers a high energy soundtrack for multiple dancing styles and head-bopping”.

Their most recent single ‘Shatter’ is a story about a one-sided relationship and trying to keep it together. A partnership is usually 50/50 but it isn’t always that way, sometimes finding yourself giving more than the other party. If you’re not careful, it could leave you feeling empty and shattered, like a broken vessel that has lost its contents.

Prior to this, for St Patrick’s Day, they released the timely ‘St. James’s Gate’.

‘’There’s nothing quite like a good Irish drinking song and ‘St. James’s Gate’ is ours,” declared the band. “It’s a feel-good tune about hanging out with your friends in the land of emerald hills and the home of Guinness Irish stout. We haven’t been to Ireland yet but if we ever get the chance you may have to pull us out of there kicking and screaming. We hope this song makes you want to raise a glass with your best mates. Sláinte!”

You can stream/buy ‘Shatter’  here  and ‘St. James’s Gate’ here and check out the videos for them right at RAMzine.

You can stream/buy It Took an Apocalyse here.