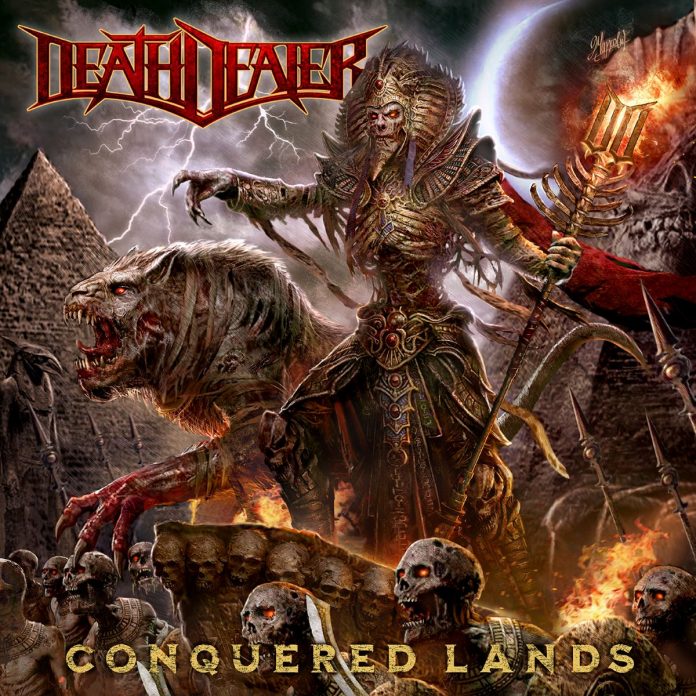 “We have been working on this record for quite a while now and it feels like the perfect time to get this out and give the people a kick ass heavy metal record,” said Ross “It almost seems like it was meant to be that the album comes out during this time period because people could use this uplifting rock and roll to put some positive energy back into their lives.”

He talks more about the album in this video footage…

The band mixes classic heavy metal with elements of thrash, power, and epic stylings, all wrapped around powerful choruses that the listener can sing along at the top of their lungs with fists held high in the air.

Their debut album, Warmaster, met with critical acclaim and led them to an arena tour opening slot in Europe and parts of Asia. Their follow up album, Hallowed Ground, continued where they left off leading to their own headlining tour in Europe. Touring and festival appearances are likewise planned to support the release of Conquered Lands.

Death Dealer released the first track on the album, ‘Sorcerer Supreme’, as a single a while back, along with an accompanying video that you can catch here at RAMzine.

“Making an album always is fun and you look forward to the fans’ reaction to it of course, but I really look forward to performing some of these ripping, speed screamers live on stage with the guys – and my new band mate, Mike Lepond,” said Peck.

“We all worked really hard on this thing and I am really happy with how it sounds,” said Marshall, who mixed the album. “All the people that helped me with the production really came through, especially Maor Applebaum who mastered it.”

Guitars, drums, and bass were also treated at Monolith Studios in Melbourne Australia by Chris Themelco, and Appelbaum mastered it in in Los Angeles, California.

“Chris made some amazing things happen to the mix and sound of the instruments and what can you say about Maor?” Marshall continued. “He is the best in the business right now. There is no reason to look for anyone else. He has always been a big supporter too, which is great!”

‘Tracks featured are ‘Sorcerer Supreme’, ‘Every Nation’, ‘Beauty And The Blood’, ‘Running With The Wolves’, ‘The Heretic Has Returned’, ‘Conquered Lands’, ‘Hail To The King’, ‘Slay Or Be Slain’, ‘Faith Under Fire’, 22 Gone, and ‘Born To Bear The Crown’.

The band has subsequently released a new single in  ‘Running With The Wolves’, and there’s a video for that you can also catch here at RAMzine.

“‘Conquered Lands has a lot of heavy fast stuff on it but this song really has a rocking vibe and  great energy.  It is one of my personal favourites on our new record,” said Ross the Boss on  ‘Running With The Wolves’.

Peck noted: “It is always a challenge to decide what songs to do videos for when you are promoting a record. I dig the hook on it and it is a fun song about being in Death Dealer. I always like bands that do songs about kicking ass. I was cracking myself up as I wrote the lyrics. It goes back to the KISS days I would say even.”

While Marshall said: “We had a ton of footage from that great tour and the video captures the crazy energy we generate at these shows and how the crowd reacts to the band and our songs. I am really looking forward to playing these new songs of Conquered Lands live eventually.”

Conquered Lands will be available in combinations of unique digipak, coloured vinyl, and merchandise configurations. You can pre-order the album by clicking here.