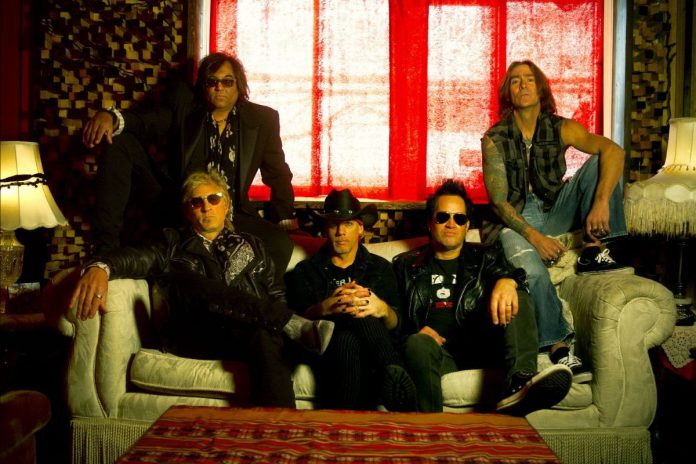 Vancouver based sleaze-soaked punk rockers Dirtbag Republic will release Tear Down Your Idols in Spring of 2021.

The band’s third album, Tear Down Your Idols will be the first release in their new partnership with Shock Records/Vanity Music Group. The single, ‘Wannabees’ preceeds the album having been released on 8th January, and the band has also released a video that you can watch right here at RAMzine.

“Filming a video in the middle of pandemic was a logistical nightmare, but the stars aligned and we were able to bang off a simple to the point performance video in short order with a known director,” said frontman, Sandy Hazard.

‘Wannabees’ is available on all digital platforms.

According Hazard, “‘Wannabees’ is an anthem for all of the musicians that tried but didn’t get the breaks over the years.” The track is seen as a representation of what’s to come on Tear Down Your Idols: Raunch led sleazy hard rock delivered with a Hanoi Rocks meets New York Dolls attitude and a mile wide hook designed to pull the listener in.

Produced by frontman Sandy Hazard and guitarist Mick Wood at both The Woodshed and Hazmat Studios, Tear Down Your Idols was mixed by Tim Neuhaus at EarArt Music and mastered by Harry Hess (Harem Scarem, Danko Jones, Billy Talent) at HBomb Mastering and is a ten song  tour de force of melodic mayhem with a strong focus on writing memorable hooks and strong melodies while staying true to their Dead Boys meets Hanoi Rocks gutter collective.

The album sees Dirtbag Republic become a quintet in the true sense of the word with permanent fixtures in the form of second guitarist, Mike Federici (Stars Unhinged), new bassist Dave Worden (previously with Young Gun) and drummer Ed Nijjer.

“The plan was to become a touring unit but 2020 got in the way,” Hazard remarked. “The band was ready to roll for live shows right when the pandemic hit but we decided to focus our downtime on writing songs for our next album instead.”

As for the album’s title, Hazard said: “It comes from a few different angles, actually. People like to discover a band and hang onto them dearly when they are lesser known. If they suddenly blow up and become wildly popular, they get a stigma attached to them and people like to tear them down a notch or call them a sell-out.  Another instance I’ve noticed is when you see some of the classic bands from the 80s who have had either health problems or are not regularly active live. Some of them sound like their expiration was due long ago and are just trying to milk their legacy.”