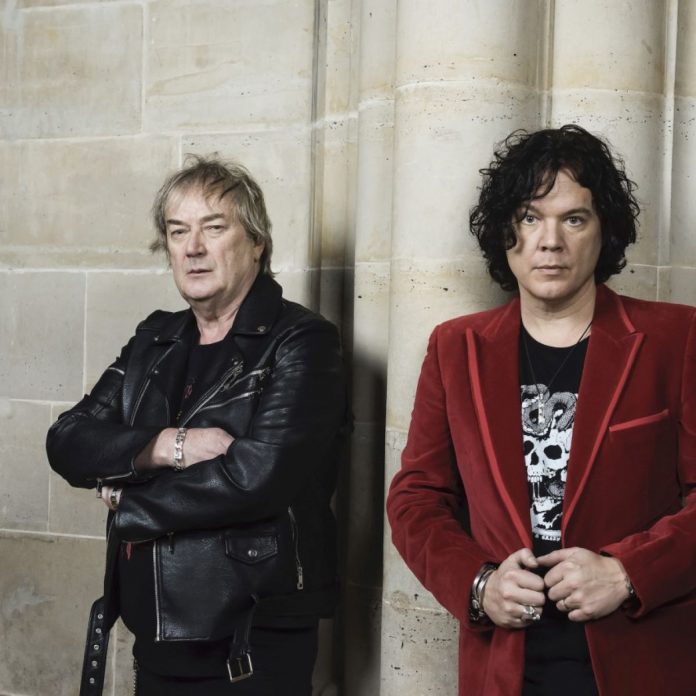 The Downes Braide Association (DBA)  follow the February release of their brand-new album, Halcyon Hymns, with a 2 LP white vinyl edition due on 26th March.

Halcyon Hymns is the fifth DBA collaboration and follows their previous critically-acclaimed studio albums Pictures of You (2012), Suburban Ghosts (2015) and Skyscraper Souls (2017 (2015) as quality examples of an accessible brand of progressive rock for the modern age.

Founded by Geoff Downes, keyboard wizard with YES, founder member of Asia and one half of The Buggles, along with Chris Braide, singer-songwriter, pianist and producer who’s worked with the cream of artists from Lana Del Rey, Paloma Faith and Marc Almond to Beyonce to, the duo has also released Live In England (2019) recorded at their first ever concert at Trading Boundaries in East Sussex, in 2018.

Following two more successful and enjoyable evenings at Trading Boundaries in February of 2020, Downes returned to Wales and his projects while Braide returned to LA and struggled to find motivation with the unfolding events in a world of lockdown. Inspiration would return following a call from a close friend.

“Marc Almond suggested I get stuck into another DBA record to lift the malaise,” said Braide. “Somehow It was hard to muster any enthusiasm for it. We had all been so upbeat at the recent shows and now here we were in a collective, creative void. It’s odd the way inspiration strikes though and it never ceases to delight and surprise me when the muse comes to play and it can happen at any time and without warning.

“I opened up a folder of new DBA ideas Geoff (Downes) had sent to me a while back and which I’d listened to briefly and had made a note to do something with them at a later date. I can’t say why it happened but one day in the studio as I listened to the bits and pieces of ideas suddenly the songs started tumbling out as if by magic. I’m not exaggerating or being melodramatic. These new songs sounded like personal reflections; they just wrote themselves. It was so easy, so enjoyable and so meant to be. Like a gift.”

Braide, it is worth noting, has also recently relocated back to the UK from the USA.

“It was so great to witness Chris’s creativity making my fundamental ideas come alive,” said Downes. “He took the bare bones of melodies, harmonies and textures I sent him, and somehow crafted these into something way beyond my expectations or imagination. ‘Love Among The Ruins’ is one of the many examples on the album of his rare genius at work.”

The album features contributions by Marc Almond (Soft Cell) and David Longdon (Big Big Train), and the CD/DVD package includes video footage of legendary artist Roger Dean’s painting sessions as he created the album cover artwork for Halcyon Days together with lyric videos for three tracks from the album.

Tracks featured on Disc 1 of Halcyon Hymns are: ‘Love Among The Ruins’, ‘King Of The Sunset’, ‘Your Heart Will Find The Way’, ‘Holding The Heavens’,  ‘Beachcombers’, ‘Warm Summer Sun’, ‘Today’, ‘Hymn To Darkness’, ‘She’ll Be Riding Horses’, ‘Late Summer’, ‘Remembrance’ and ‘Epilogue’.

While the DVD on Disc 2 features: ‘Roger Dean Painting Sessions’, ‘Love Among The Ruins’, ‘Your Heart Will Find A Way’ and ‘Today’.

The duo has released a number of singles from Halcyon Hymns. First up was ‘Love Among The Ruins’ at the tail-end of 2020, followed up in the new year with ‘Your Heart Will Find A Way’, and thereafter by ‘Today’. Most recently they have issued ‘Warm Summer Sun’.

You can catch all their official videos right here at RAMzine.

You can order this version by clicking here and the vinyl editions are available here. A digital version is also available.