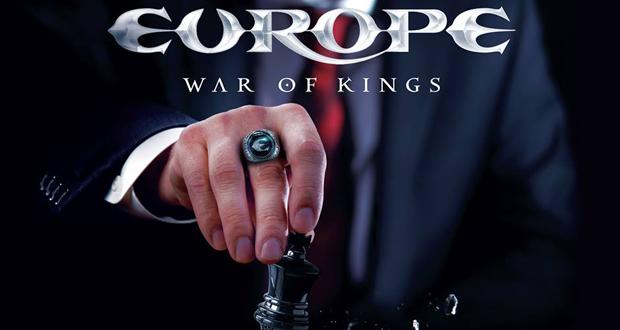 Europe are back this March with the release of their 10th studio album ‘War of Kings’. Most known for their 80’s track ‘The Final Countdown’, these Swedish rock legends are a great band to catch, especially if you haven’t checked them off your list yet!
‘War of Kings’ is set for sail on the 2nd March 2015 via UDR Records. Recorded at the brand new PanGaia Studios in Stockholm, Sweden, produced by Dave Cobb (Rival Sons) and engineered by John Netti, ‘War of Kings’ is said to see the classic rocking quintet confidently creating 11 monsterously melodic, yet hard-hitting, classic rock’n’roll standouts for their fervent global audience.

Lead vocalist, Joey Tempest  tells us “ ‘War Of Kings’ is the album we always wanted to make, ever since we were kids listening to bands like Zeppelin, Purple and Sabbath. And after hearing Dave Cobb amazing production for Rival Sons we simply had to work with him. Our adventure is still ON!”

Joey adds “Hey! We took the long road! but we wanted to re-establish Europe the proper way. It’s taken 10 years and countless tours since the re-union, but we’re finally getting there! And we’ve done it our way!”

‘War of Kings’ tracklisting is as follows –