Face To Face with Rainbreakers 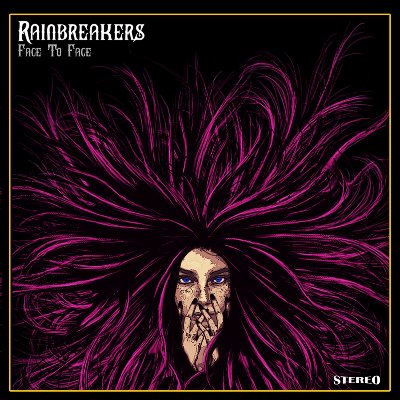 Shrewsbury’s Rainbreakers have announced the release of their debut album Face To Face on the 31stAugust.  Lead single ‘Heavy Soul’ having clocked up over 10,000 views in a month it’s fair to say anticipation for the album is high.

The 10 track record was recorded with producer Tom Gittins (Robert Plant, Broken Witt Rebels) at Monochrome Productions and will be released on CD, vinyl and as a digital download.

Having developed a distinctive sound that embodies a fusion of musical elements bridging rock, blues, pop and soul with last year’s Rise Up EP that was reviewed at Ramzine, this full album is said to demonstrate the band’s progression as song writers and musicians.

Rainbreakers features Charlie Richards (lead guitar), Ben Edwards (vocals, guitar), Pete Adam (bass) and Sam Edwards (drums). They have toured across the UK and mainland Europe, sharing stages with artists such as The Kris Barras Band, Samantha Fish, Devon Allman, Bad Touch and Laurence Jones and been were nominated for the UK Blues Challenge and Best Emerging Artist in the British Blues Awards 2016.

Face To Face depicts a particularly tumultuous part of lead singer Ben Edwards’ life. Although the situations may be extremely personal, they are problems that we all face in life. The record is said to take listener’s through the journey of one man’s struggle to bring those problems into the forefront of his life and face them head on. Ben’s own struggle with depression and anxiety was the inspiration for the album’s lead single ‘Heavy Soul’, however this struggle with emotions is the backdrop for the entire album, whether that is struggling with one’s own emotions or dealing with potentially harmful relationships.

What follows is a track by track breakdown of the songs on Face To Face, as explained by the band themselves:

Heavy Soul: “This song is all about Ben’s own struggle with mental illness and was released with the intention of shining a light on the issues surrounding mental health and helping people realise they aren’t alone. Ben had this to say about ‘Heavy Soul’:

“‘I have been dealing with depression for many years now. I have to deal with many dark thoughts that aren’t easy to talk about or easy to deal with. ‘Heavy Soul’ is about living through those times. It can feel like I’m on a knife edge at times unsure of how I’m going to feel from one day to the next. However I think it’s really important to remember that we are all capable of good and when I feel at my lowest I always try to remember the better times. Even if I feel like I have a heavy soul, I take a deep breath and remind myself that I still have a heart of gold that is there wanting to shine.’”

Got Me Where She Wants: “The title for this track is fairly self-explanatory. However, it’s not just about being manipulated or trapped by a partner; it’s about knowing that you have a part to play within a relationship that has problems that neither party want to face. The main imagery used whilst writing this song was that of a man hiding from his troubles at home in his local pub. Meanwhile, his partner is vying for his attention and wants him home. Neither side feels like they can win, but neither of them wants to walk away.”

Ain’t Nothin’ Going On: “The band felt as though this song needed to be rerecorded from their debut EP, as it has evolved to an extent that was worthy of further attention. This song reflects the problems faced by being in a relationship whilst out on the road with the band. It can be hard enough being away from home for extended periods of time without being accused of playing foul while you are there. It’s about trying to defend yourself against allegations over and over again when you genuinely haven’t done anything and the frustrations that are felt as a result.”

Lost With You: “A love song, pure and simple. When someone walks into your life and before you even know it, you become immersed in them and everything they do consumes your mind. You become lost in whom they are and you can’t get enough of being around them. All you have to offer is yourself and you offer it without a second thought because you’ve been waiting to find a connection as strong as this all your life.”

Face To Face: “We wrote this song years ago, it’s based on a situation Ben found himself in one night in a club. A girl had started talking to him at the bar, but her recent ex-boyfriend was watching the entire time. The song is written from the perspective of the jealous man as he watches this unfold in front of him. We’ve all felt like that, the paranoia, anger and jealousy that floods the brain. The important message from the song is that these situations can be diffused, if people were to talk about the issues and feelings they have face to face.”

Need Your Love: “This track is a plea for help from the one person that you may have taken for granted. It can be hard to maintain relationships whilst both parties have their own agendas and ideals, but this is a person realising that they need the other to be happy even though they have been pushing them away. A song about not knowing what you’ve got until it’s gone and looking for redemption.”

Take It Or Leave It: “This song is about standing up for yourself and what you believe in. You can be accused of wrong doing or being unfair but at some point you have to take stock in your own values. Sometimes people can victimise themselves to make you feel guilty, even though they are the ones causing friction.  This track is all about standing your ground and knowing when to walk away.”

Lay It On Me: “This is about telling someone that all they need to is talk to you. The relief you can get from opening up to someone is massive. Life can be hard, but with the right people around you, there is always someone willing to share the load and help you through it. When someone close to you doesn’t open up and tell you what the problem is to your face, it can be hard to be there for them. So this song is to remind those people that you care for them and want them to lean on you in times of trouble.”

On My Knees: “Ben and Sam wrote the lyrics for this a long time ago and they distinctively remember this feeling of being lost in the desert. With the sun beating down on you and the sand burning the soles of your feet, causing desperation while searching an endless wasteland for a way out.  A metaphor for feeling lost in general and trying to find you own path in life. Taken from their first record this song has finally been given the life it deserved.”

Waiting On You/Moving On: “‘Waiting On You’ was written a couple of years ago and appeared on their last EP Rise Up. It was always a song that came from a loving and caring place, but is about someone hoping for a change to come from the their partner and effectively giving them the ultimatum. However the band felt that the song was still unfinished, giving rise to a new crescendo. The second half of the song is more of a reflection of having to step away from that relationship which, as difficult as it can be, is the right choice to be made for everyone. Showing a completion to a story that is full of ups and downs, this track was the perfect way to end the album.”