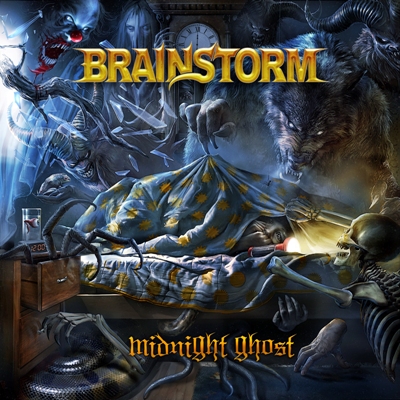 German power metal band Brainstorm release their 12th album Midnight Ghost on September 28th through AFM Records, and it will be available as a CD and with an additional digibook bonus DVD titled Scary Creatures Over Europe 2016″ at LKA Stuttgart.

“Midnight Ghost is the album we always wanted to create for our fans – and ourselves,” said Vocalist Andy B. Franck. “Every song, the sound, the cover artwork… it feels perfect to us! It all has such an incredible power, which is hard to describe. For me it’s definitely one of our best albums and I’m confident that we can reach a new Brainstorm level with Midnight Ghost now. We can’t wait to bring this to the stages!“

The Scary Creatures Over Europe DVD contains ‘The World To See’, ‘Firesoul’, ‘Fire Walk With Me’, ‘Highs Without Lows’, ‘We Are’, ‘Worlds Are Coming Through’, ‘Shiva’s Tears’, ‘End In Sorrow’, ‘How Much Can You Take’, ‘Falling Spiral Down’, ‘All Those Words’, and ‘Shiver’.

The album was produced by Seeb Levermann (Orden Ogan, Rhapsody Of Fire) and its cover artwork created by Gyula Havancsak (Annihilator, Stratovarius). The album will be available as CD, CD/DVD digibook, blue Vinyl (limited to 400 units), yellow/blue splatter Vinyl (limited to 100 units and exclusively available in the AFM webshop) and box set.

Brainstorm have released ‘The Pyre’ their new single and audio video ahead of Midnight Ghost’s release, that you can listen to here at Ramzine.