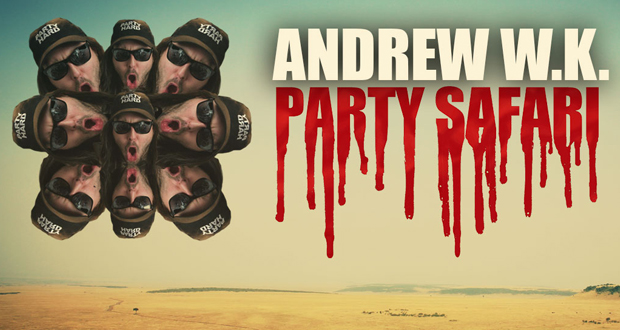 This is no ordinary interview, and not just because of it’s unique location. The documentary as a whole leaves you feeling confused, and portrays utter mystery. It is however entertaining, and a documentary with a difference. You really need to watch it for yourself:

On a quest for some answers we asked Chris Hines if this was Andrews usual behavior, to which Chris told us:

As you can see in the documentary I’ve met him many times before this and he is always super positive and happy. This day though we felt something was different right from when we first met him and it just got weirder. We have no idea if he was just messing with us or if something else was going on. He’s a mysterious man!”

So far the documentary has won Best Party Film at the Movie Days / The Dark Zone Festival in Germany, and last year got accepted for the Cannes Film Festival Short Film Corner.

Party Safari was filmed at Hevy Festival 2012, where RAMzine were also present. It was actually the first video interview that we ever published. Andrew W.K. told us “This is the first time I have ever seen a zoo or any kind of wild animal park in the UK, not to mention the fact that we are here at a heavy music festival on top of it all, it’s quite exciting, and we are having a ball”.

We went on to ask Andrew if he had visited the zoo and he told us that he had seen a family of rabbits, that he had crept up behind to “mash”. Towards the end of the interview Andrew tells us about a dream he had, where people were serving a pineapple and public hair biscuit as a delicacy…