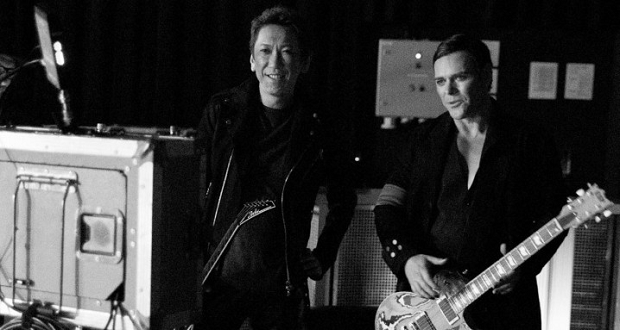 You may have heard of the globally acclaimed guitar legend Hotei if you have have ever listened to the soundtrack of Kill Bill.  Or even playing alongside the likes of David Bowie or The Rolling Stones.

You may also know he has sold 40 million records in his native Japan and now releasing his UK debut, ‘Strangers’,  with the help of Iggy Pop, BFMV’s Matt Tuck and Rammstein’s Richard Z. Kruspe.

The video below is behind-the-scenes footage of Hotei’s collaboration with Rammstein guitarist Richard Z. Kruspe who provides guest vocals on ‘Move It’:

As Hotei explains in the video: Richard has wrote lyrics for , and also plays on the new track. Uncharacteristically for both artists – ‘Move It’ is sang in the English language. You can check out the finished video below:

Hotei had this to say:

“I wanted to make it simple, because Richard has a very strong character, and I think we have different characters. First, we wanted to try to do a story, but now it’s more like a focus on two characters on the same screen.”
The album ‘Strangers’ is out now.
Share
Facebook
Twitter
Pinterest
Linkedin
Email
Print
Mix
Previous articleTrivium’s Paolo Gregoletto talks tour, down time and the new album
Next articleRed Hot Chilli Peppers reveal new track ‘Dark Necessities’